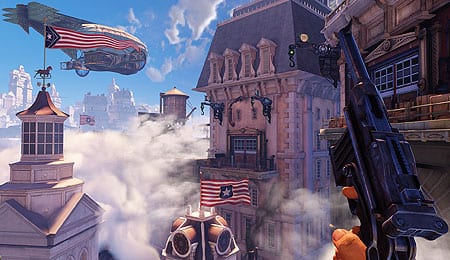 It has been more than three years since 2k Games last took us to Rapture in BioShock 2, a game that, while very enjoyable, never reached the heights of its predecessor. Now, Irrational Games returns to guide the series from the underwater depths and into the sky with BioShock Infinite. It may not be the perfect extension of the BioShock universe, but it’s damn close.

As with the earlier games, BioShock Infinite offers you a combination of guns and vigors (previously known as plasmids) to dispatch your enemies. The right trigger fires your weapon, the left unleashes your vigors and face buttons take care of jumping, interacting and melee strikes. It proves to be a good, but not great, setup. This is primarily because you can only toggle between two vigors at a time using the left bumper — you can access the wheel containing all eight by holding it down, but in the heat of battle I rarely found myself taking the time needed to do it. Given that the d-pad is scarcely used it would’ve been nice if I could’ve mapped four vigors there instead.

You’re only allowed to carry two guns at once this time around as well, which creates moments when you don’t have the right mix of weapons for a given situation. To its credit, the game generally does a good job of leaving those weapons lying around for you to find. Still, I missed the ability to approach situations exactly as I saw fit. Multiple ammo types (as seen in previous BioShock titles) have also gone by the wayside.

Even though Irrational Games had to make some concessions visually in moving BioShock Infinite from the PC to consoles the design aesthetic is so exquisite in its conception and execution that any and all technical shortcomings are forgivable. The city of Columbia reinvigorates the sense of discovery and awe that was lacking when BioShock 2 revisited Rapture, and the use of the interconnected islands via the sky rail is exceedingly cool.

Character models look good, especially Elizabeth, who despite possessing no skill in combat manages to emerge as one of the best NPC partners I can remember. The enemies and ships you encounter have a distinct steampunk feel to them, and the blending of semi-modern technology with turn-of-the-century styling works well. There’s also plenty of bloodshed to be found throughout without ever truly crossing over into gruesome territory.

Troy Baker and Courtnee Draper are excellent as Booker DeWitt and Elizabeth, respectively, delivering a powerhouse performance that’s long on subtlety — a rare thing in gaming and ever rarer in the realm of shooters. There’s genuine emotion in their delivery, and the growth of their relationship over the course of the game is tangible. These aren’t heroes and damsels in distress. They’re people, struggling to make sense of the hand they’ve been dealt. BioShock Infinite already possesses an intelligent story, but it’s the voice acting that elevates it to another level.

Keeping pace stride for stride with the dialogue is a moving soundtrack that knows just when to build and when to pull back. There’s also some great period-specific songs performed or heard through the radio during the game, easily the coolest being DeWitt and Elizabeth’s brief impromptu performance of “Will the Circle Be Unbroken?” that stood out as a striking change of pace amid all the violence.

Bring us the girl, wipe away the debt. Those eight words send Booker DeWitt on his way to the floating city of Columbia to rescue the mysterious Elizabeth, who is imprisoned within a tower. Your employer’s motivations are unknown, and they become even cloudier when billboards warning citizens of a false shepherd bearing the mark on your hand indicate you’ve been expected. Did they warn the city’s self-proclaimed prophet, Zachary Comstock, or are his powers legitimate?

From these relatively humble and straightforward beginnings spawns a story that deserves to be mentioned in the same breath as the original BioShock. It’s compelling and character driven while simultaneously pulling off the rare feat of being both grounded in reality, addressing serious issues like social inequality and racism, and rich in fantasy — you are, after all, traveling around a city held aloft by “quantum levitation” with a companion that can open holes in the very fabric of time/space.

Elizabeth’s ability to create these rips affords BioShock Infinite one of its two unique gameplay elements as during battles you are able to summon objects and allies from other worlds. You can only open one rip at a time, but they’re usually quite varied to give you different options to fight your enemies. For instance, an area might offer the option to call in basic cover, a motorized turret, high ground from which to fight or a powerful gun. From there you can plan your strategy based on if you want to proceed aggressively or with caution.

The other hook is a literal one — the game’s sky hook allows you to traverse the airspace above the battlefield quickly and rain fire down on your foes (or escape from them). Cover is minimal in the sky, however, and thus you must keep moving lest you be picked apart. Navigating the skyline is very easy and never gets in the way of your ability to fight. Adding these two aspects of combat on top of the already potent mixture of guns/vigors makes gameplay a blast.

Columbia is also a city ripe for exploration. Locations are quite open with plenty of non-essential areas to scour as you search for money to buy weapon upgrades, infusions to beef up your health, shield or vigor, and audio recordings that help flesh out the main story. I believed myself to be quite thorough in my journey through Columbia only to find I was missing a number of audio logs and other optional items when the credits rolled. Sure, you can rush through and bypass this stuff, but the world has been so meticulously created that you’d only be short changing yourself.

There are some minor quibbles to be found here and there. Even installed to the hard drive the game has places where an in-chapter load is needed. Usually it’s just a hiccup in immersion, but there was at least one fight when I kept ducking in and out of a building for cover that frequently paused to load interior and exterior elements. Also, as noted earlier, the control setup for vigors led to me using the same ones over and over again instead of mixing and matching for effect.

When compared to its predecessors, BioShock Infinite is also missing a truly engrossing signature enemy to serve as your foil. Compared to the Big Daddy (or even Big Sister), the hulking Handyman is a poor substitute with mostly cheap feeling attacks like the ability to electrify the skyline. Meanwhile, the only other potential replacement, the mechanical patriots, are more bullet sponge than menace.

It’s also worth noting that the multiplayer has been axed (though if you played BioShock 2’s effort for more than a few hours you might count this as a blessing). Even when viewed collectively, though, those issues don’t amount to a hill of beans in the crazy world of Columbia.

With varied combat and a deep, engrossing story that features one of the best endings I’ve ever seen in a video game, BioShock Infinite proves itself worthy to walk the hallowed ground of the original game. I could write another thousand words about all the ways it excels, but I’d hate to diminish the feeling of experiencing it for yourself.

Our friends at 2k at are it again, this time offering you the chance to win codes for the Industrial Revolution Pack and Comstock’s Sniper Rifle on Xbox 360 or PS3! To enter, post a comment below telling us what your favorite vigor was in BioShock Infinite. Also, please include which console you have the game on along with @Twitter handle if you have one. If not, just make sure the email you use when posting is valid so we can contact the winners.

Winners will be selected on Wednesday, April 24. All entries must be submitted by 7 p.m. EST/4 p.m. PST on Wednesday. Please note that although anyone can enter you must either be following me on Twitter or submit a working email address to win.

By Herija Green
This entry was posted on Thursday, April 4th, 2013 at 11:45 am and is filed under Herija Green, Video Game Reviews. You can follow any responses to this entry through the RSS 2.0 feed. You can skip to the end and leave a response. Pinging is currently not allowed.