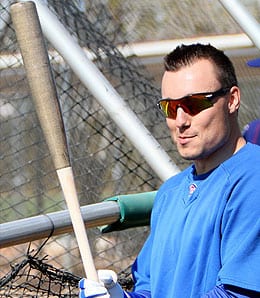 Jeff Baker landed yet another big league job this spring.

Veteran infielder Jeff Baker is at the stage of his career when any job is a good job. Last year, he was passed around like a number at a Grateful Dead show, getting dealt from the Cubs to the Tigers in early August for two PTBNLs, playing all of 15 games for Detroit and then getting shipped off to Atlanta for a PTBNL.

In the span of 26 days, Baker wound up creating three players to be named later.

This spring, he had to work his way back onto a big league roster and he did so in style, batting .424 with 12 runs, a homer and nine RBI to earn a utility job with the Texas Rangers.

Baker sat on the pine in the opener as the Rangers were crushed 8-2 in Houston and he is unlikely to offer Fantasy value even in the deepest of AL-only leagues unless a wave of injuries strikes Texas. (Even so, you’d have to think that Jurickson Profar would get recalled before Baker ever earned everyday at-bats.)

He’s a second baseman by nature, but can also man either corner outfield or infield slot.

The bottom line is that the 31-year-old has pretty much been in free fall offensively since 2008 — the year he received his most PT ever (104 games, 299 at-bats). Leaving Coors was Baker’s death knell, yet he continues to hang on as a fringe major leaguer, refusing to go quietly into the night (or, in this case, head to Indy ball or Japan).

Crave more in-depth Fantasy analysis? Then join us every Thursday at 9 p.m. EST for RotoRob’s Fantasy Baseball Weekly Podcast on Blogtalkradio. Tim McLeod and I will entertain and edify you for a half hour or more each week. We’re off this week for to attend the Philadelphia Flyers game, but will return on April 11. Tune in here.

By RotoRob
This entry was posted on Tuesday, April 2nd, 2013 at 2:05 pm and is filed under BASEBALL, Fantasy Notes, RotoRob. You can follow any responses to this entry through the RSS 2.0 feed. You can skip to the end and leave a response. Pinging is currently not allowed.