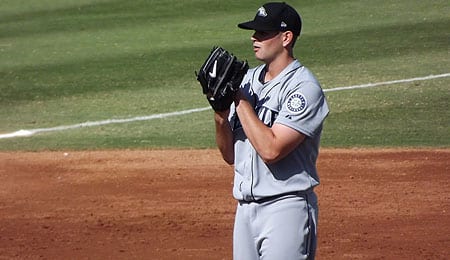 James Paxton impressed us at the AFL. (Photo by Tim McLeod)

Small cozy parks with 300-to-400 fans in attendance; consistent 30 degree (Celcius) temperatures with nary a cloud in the sky; some of the best young players in the game plying their trade.

If that isn’t a recipe for a great week in November please tell me what is? When you toss in several hundred of your closest baseball friends enjoying three days of great seminars hosted by Ron Shandler and the fine staff at Baseball HQ it simply can’t be beat.

Welcome to the 2012 Arizona Fall League.

Last year, we got to see Gerrit Cole and Danny Hultzen face off in the AFL All-Star Game. However, the new CBA has pushed the signing date for the Amateur draft up a full month and has definitely changed the landscape in the AFL. Recently signed pitchers can get their work in prior to the AFL which means they are more likely to skip the fall league. There are no Bryce Harper or Mike Trout type of immediate impact players in this group but realistically could we expect to see two players of that caliber more than once in a lifetime?

So now let’s take a quick look at some of the players that caught our attention this fall.

Billy Hamilton, OF, Cincinnati Reds: I witnessed Hamilton turn a bunt single into a triple, steal both first and second, and make an outstanding catch in centre field to rob Brian Goodwin of extra bases, and all of this happened just in the All-Star game. Hamilton has wings and the attitude to go along with it. Two plays that caught my attention worth mentioning was a fake steal of home where he went from 0-to-80 km/h in a blink of an eye and just as quickly hit the brakes. The poor pitcher is still wondering what happened and a change in underwear between innings had to be part of the program. The second thing that caught my attention was with a runner on first, Hamilton took a walk. It was the perfect opportunity to swing away and be a bit selfish but he did the right thing. He’s one injury away from getting a promotion next season and for Fantasy purposes he will be a dominant force in the stolen base category.

Mike Zunino, C, Seattle Mariners: Taken third overall in last year’s June Amateur draft, Zunino is quickly getting people’s attention. He slugged 13 homers in his first 161 at-bats this summer and has added a couple more in the AFL. Miguel Olivo is not returning to the Mariners and if John Jaso is the main obstacle to regular playing time I wouldn’t at all be shocked to see Zunino fast tracked by the Mariners and arrive in Seattle at some point in 2013.

Hak-Ju Lee, SS, Tampa Bay Rays: Lee’s glove is MLB ready, his bat not so much. The speedy middle infielder has wheels as demonstrated by his 37 thefts at Double-A Montgomery and when your main competition to playing time is Elliot Johnson there is reason for hope.

James Paxton, SP, Seattle Mariners: The first game I saw in Arizona involved a 75-kilometre trek to Surprise to catch Paxton and it was worth the hike. He tossed two scoreless innings, allowing a couple hits and striking out a pair. I liked what I saw but that’s no surprise; my love for this southpaw has been well documented. The majority of the scuttlebutt in ‘Zona seemed to revolve around whether he’s a starter or closer down the road, but either way he should be the first of the deep core of minor league pitching prospects to arrive in Seattle.

Rymer Liriano, OF, San Diego Padres: Liriano hit everything this fall and hit it very solidly. His numbers took a hit with his promotion to Double-A but you’d never know it by his AFL performance. Rymer’s amassed four homers, 15 RBI, and six thefts so far this fall, so Cameron Maybin should be looking over his shoulder.

Brian Goodwin, OF, Washington Nationals: It will be interesting to see what the Nats do this offseason and these decisions will go a long ways in determining Goodwin’s future. The MVP of the AFL All-Star Game is doing his best to convince the Nats that he’s their man. He launched a bomb to right field and drove everything hard. Toss in the fact that the kid has great wheels and he looks to have a bright future in the game.

Kyle Gibson, SP, Minnesota Twins: Gibson was getting in some work this fall as he continues to rehab from the Tommy John surgery that derailed his career in September 2011. His velocity looks like it’s bouncing back to the point that he should be in the mix for a spot in the Twins rotation in 2013.

Anthony Rendon, 3B, Washington Nationals: What a sweet swing. Now if only Rendon can only find a way to stay healthy.

Grant Green, 2B, Oakland Athletics: Somehow I get the feeling that Green could be a career AFL participant. In three years I’ve seen him do everything but catch and that’s probably being saved for next year. This year he’s playing at second base and is blocked by both Scott Sizemore and Jemile Weeks at the big league level. We’ll see you next fall, Mr. Green.

Nick Franklin, SS, Seattle Mariners: This was my second opportunity to watch Franklin in the AFL and no matter how hard I try I can’t help but see Dustin Ackley Part Deux. I’ll let you be the judge as to whether that’s a good or bad thing.

Nick Ahmed, SS, Atlanta Braves: Ahmed’s ability to run has never been questioned but I witnessed him hit a major bomb to left field. There’s a lot of youth at shortstop in the Braves’ organization but there’s always room for one more. I believe Ahmed has a lot more life in his bat than we’ve seen so far.

Nick Castellanos, 3B/OF, Detroit Tigers: Give Castellanos another year and he’ll make the Tiger faithful forget about Delmon Young, or has that already occurred?

Kevin Pillar, OF, Toronto Blue Jays: My first thought when I saw Pillar was who the heck is this kid? I went straight to the trusty media guide and lo and behold he was the Jays’ 32nd round pick last year. He came out college, so was a bit old at 23 to be playing A-ball but he stole 51 bags this year between Class-A and High-A. I’ve always had a fondness for the underdog and Pillar really looked good. Let’s see how he does next year in Double-A.

Deck McGuire, SP, Toronto Blue Jays: Trying to find positive attributes from the one game I saw McGuire start was a bit of a chore. I guess the fact that he gave his infield mates a good workout can be considered a positive attribute.

Kevin Quackenbush, RP, San Diego Padres: The Padres just keep churning out those quality relief pitchers and Quackenbush can be added to the list.

By Tim McLeod
This entry was posted on Sunday, November 11th, 2012 at 5:45 pm and is filed under BASEBALL, Event coverage, Prospects, Tim McLeod. You can follow any responses to this entry through the RSS 2.0 feed. Both comments and pings are currently closed.