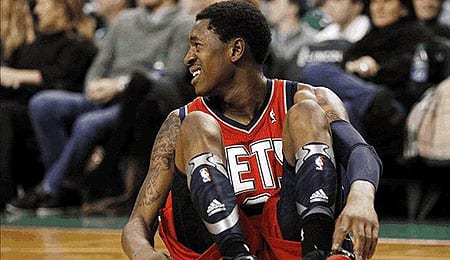 MarShon Brooks is finally getting off his ass and contributing.

Can you believe we’re heading into Week 21? The NBA season is nearly complete and we hope that this column has helped you remain in contention all season long.

The Trail Blazers sported their ‘rip city’ jerseys Thursday and they inspired a team that is holding its own lately; Miami continues to move towards immortality with its winning streak, now at 21 games; and on Friday, Kobe Bryant made a valiant attempt to come back from a severe ankle injury, but couldn’t last long in his return.

MarShon Brooks, SG, Brooklyn Nets: Back in January, we sent some love Brooks’ way when Gerald Wallace was out. Now that Joe Johnson (heel) is missing in action, Brooks is back into some serious rotation minutes and he responded Tuesday with 14 points (on 5-of-6 from the field and 4-of-5 from the line) and three boards. That kind of effort is going to earn him decent PT going forward, making him a nice low-end option. There’s a chance the Nets will try to deal Brooks this summer, and if that’s the plan, perhaps he’ll be showcased a bit more down the stretch. This kid showed he could score as a rookie last season, but his soph campaign has been a nightmare as the addition of JJ has him buried in Brooklyn.

Steve Blake, PG, Los Angeles Lakers: Blake missed a lot of time earlier this season but he’s recently seeing some serious minutes as the team’s sixth man and he’s responding. On Friday, he canned five treys on his way to 18 points with seven rebounds, six assists, four steals and two blocks. Wow. That was probably the best game he’s had in three seasons with the Lake Show. Blake’s touches are up of late and his FT shooting — an issue this season — seems to be improving somewhat lately. Don’t expect monster lines again like Friday’s showing, but give him a look if you need guard help.

J.J. Barea, PG, Minnesota Timberwolves: Barea shot very well Friday on his way to 19 points, so give him a look if you need guard help in a deep league.

Iman Shumpert, SF, New York Knicks: In mid-January we recommended Shumpert and now that he’s starting with Carmelo Anthony out, he’s worth a second look. Shumpert is one of the Knicks’ top defenders, and that alone should garner him plenty of PT (although you should note that Melo could be back Sunday). But when he contributes offensively (11 PPG over the past four including a season-high 20-point explosion Wednesday that included four three-pointers), he has to be put on the Fantasy radar. Besides, Shumpert is part of the new Champs campaign, so he deserves some love for that awesome ‘fro he’s sporting.

Tayshaun Prince, SF, Memphis Grizzlies: When Prince was dealt to Memphis last month we said we expected his value to rise. The new Grizzlie is helping his team roll, going off Wednesday for 18 points in 39 minutes while adding six boards and a steal. Prince played big minutes again Friday, chipping in with three assists, a three pointer and another steal. He’s not shooting as well from the line as he usually does and while Detroit was wise to rid itself of his salary and offensive limitations, there’s no doubt that the Pistons’ D has struggled without him.

Kenyon Martin, PF, New York Knicks: K-Mart was just signed for the remainder of the season and he’s getting a chance to shine with Tyson Chandler out.

Jae Crowder, SF, Dallas Mavericks: Crowder is getting a chance to start while Shawn Marion nurses a calf woe and he crashed the glass for a career-best 14 boards Friday. Why not take a flier?

Brandan Wright, PF/C, Dallas Mavericks: We gave Wright a nod in December and while he enjoyed an uptick in PT that month, he hasn’t really justified our faith. Things have changed now, however. Wright is seeing 25 MPG so far in March and with the Mavs looking at a four-game week, he’ll be a nice pickup. Need blocks? He’s averaged two per game over the past five, has reached double digits in scoring in four of those games and has pulled down at least five boards in every contest. Wright has cannibalized Chris Kaman’s PT and finally seems to have coach Rick Carlisle’s confidence, so grab him while he’s getting the burn.

Kosta Koufos, PF/C, Denver Nuggets: We gave Koufos some love in late-January and while he let us down last month, he’s back now and again worthy of your consideration. A top 120 player, he’s been largely ignored by Fantasy owners all season, but that’s about to change after he exploded for a career-high 22 points Monday and then pulled down a career-best 16 boards Friday. Koufos is getting to the line more often (including six times Friday) and that will help him beef up his scoring (even if he’s struggled from the stripe this season). Denver is on fire (11 straight wins) and Koufos’ improved play is a big reason why. The big man is coming into his own right before our eyes, so jump on his train now.

Josh McRoberts, PF/C, Charlotte Bobcats: McRoberts moved into the starting lineup Tuesday and responded with his first double-double for the Bobcats and then just missed another on Friday.

Jason Maxiell, PF/C, Detroit Pistons: Maxiell returned from an ankle injury Wednesday with 14 boards, eight points and three assists in 32 minutes. If you need rebounding help, this dude could get the job done.

By RotoRob
Tags: Portland Trail Blazers
This entry was posted on Saturday, March 16th, 2013 at 1:45 pm and is filed under BASKETBALL, RotoRob, The Wire Troll. You can follow any responses to this entry through the RSS 2.0 feed. Both comments and pings are currently closed.