The Wire Troll: Vince Carter Putting on a Show From Downtown 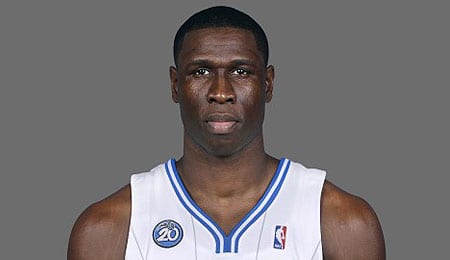 Mickael Pietrus is getting a ton of burn in Toronto.

This week, Kevin Durant went off for 36 points to put the Lakers in their place; speaking of the Lake Show, Pau Gasol could be on his way out of town; and over on the east coast, the defending champion Heat is currently dealing with its own issues.

Mickael Pietrus, SG, Toronto Raptors: Pietrus pretty much remained on the periphery of Fantasy value last season in Boston, but he seems to be reborn since the Raptors signed him at the end of November. Injuries in Toronto have allowed the swingman to quickly become the starting small forward and he’s taken advantage of his opportunity so far, scoring 21 points in 40 minutes Wednesday and following that up with a four-trey night Friday en route to 13 points with three blocks and a fourth straight game with a steal. Pietrus has never gotten this kind of burn before, so grab him while you can.

Randy Foye, PG/SG, Utah Jazz: Heading into the season, we projected Foye 40th in our Shooting Guard Rankings, but he’s been closer to 30 so far, meaning he needs to be added in lots of formats. He’s been getting plenty of burn lately (30.4 MPG over the past five), shooting well and really lighting it up from beyond the arc. Don’t expect to see many three-block nights like he had on Friday, but Foye is capable of putting points on the board. He’s having an unbelievable season from downtown, so if that’s a need on your squad, give him a look.

Eric Gordon, SG, New Orleans Hornets: Okay, there’s still no timetable for Gordon to return from his latest knee woe, but he is reportedly making progress, so if you have room, stash him.

Marco Belinelli, SG, Chicago Bulls: Belinelli is starting with Rip Hamilton out and getting it done, canning a pair of treys en route to 16 points Friday after going off for 23 Wednesday.

Vince Carter, SG/SF, Dallas Mavericks: When Carter returned from a foot injury in January, we recommended him as a waiver wire addition and that wound up being a decent choice as he struggled with his shot in February, took care of the rock in March and then did a better job of sinking the ball in April. He’s supplying some nice offence off the Mav bench now, scoring a team-high 16 on Wednesday for his sixth straight double-digit scoring effort. He got extra burn the next night and while he struggled with his shot, VC was perfect from the line and pulled down four boards with a couple of steals. Vinsanity has been putting on a clinic from downtown lately and while he’s only a bench player at this stage of his career, he’s still capable of helping your Fantasy team.

Elton Brand, PF, Dallas Mavericks: Part of the Clipper reunion tour in Big D this season, Brand has spent most of the season starting for the Mavs, and while we’re still waiting for him to flash some consistent offense, he’s been doing a great job on the glass and racking up the blocks. His PT is up a bit lately and while he’s still not getting as many touches as we’d like, if Chris Kaman (ankle) has to miss some time, Brand could be quite useful.

Jared Dudley, SG/SF, Phoenix Suns: Dudley has publicly supported Michael Beasley, but with Beasley moving to the bench, it is Dudley whose value could jump.

Bismack Biyombo, PF/C, Charlotte Bobcats: Biyombo is racking up boards and blocks off the bench while starting to steal big man minutes from starters Byron Mullens and Brendan Haywood.

Brandan Wright, C, Dallas Mavericks: Last month we recommended Wright as a pick up and that advice definitely bore fruit for a about week before his PT started to wash up and he began taking DNP-CDs. He got another shot Thursday, and responded with a season-high 16 points with a couple of boards and blocks. Both Shawn Marion and Kaman (possibly) could be out Saturday, giving Wright more burn. He’ll need to do better work on the glass to really stick in the rotation and it would be nice to see him get to the line more often, but if the Caveman does in fact miss time, we like Wright’s chances of earning Coach Rick Carlisle’s trust a bit more.

Enes Kanter, C, Utah Jazz: We really liked Kanter’s skill set heading into the 2011 NBA draft, but as expected during his rookie season he came off the bench behind Al Jefferson so didn’t get a chance to show much. However, with both Big Al and Derrick Favors hurting Friday, Kanter earned his first career start and went off for 18 points, eight boards and a block. The kid is just a flier choice right now, but as he gets more and more minutes, we love his chances to produce.

Jason Maxiell, PF/C, Detroit Pistons: When Maxiell is crashing the boards and busting his hump, the Pistons seem to be more competitive. Don’t expect him to sink many buckets, but back-to-back five-block games last week sure were intriguing.

Spencer Hawes, Philadelphia 76ers: On Friday, Hawes shook off a prolonged slump with 10 points, six boards, a block and a steal off the bench. His minutes have crept up this week, so keep an eye on him.

By RotoRob
This entry was posted on Saturday, December 8th, 2012 at 4:06 pm and is filed under BASKETBALL, RotoRob, The Wire Troll. You can follow any responses to this entry through the RSS 2.0 feed. Both comments and pings are currently closed.