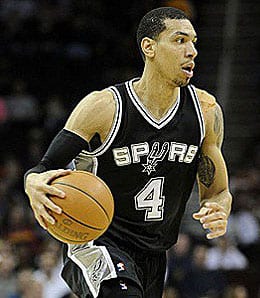 Metta World Peace put on a show from downtown to help the Lakers snap a four-game skid; Tim Duncan is heading to his 14th All-Star Game; Warriors’ Coach Mark Jackson is fuming that his point guard isn’t joining The Big Fundamental on the Western Conference All-Star team; and over in the East, Dwyane Wade has his scoring mojo going, leading the Heat to four straight wins.

Note that the Hawks, Thunder and Spurs all play just twice this week, so roster players from those teams very judiciously.

Danny Green, SG, San Antonio Spurs: Green struggled at the end of November and beginning of December and he didn’t get to the line as often last month. His slump continued into January, but Green is showing signs of awakening from his slumber, reaching double digits in scoring in the last two games, racking up five steals and five treys along the way. This dude shoots the vast majority of his shots from downtown, and although he’s not hoisted as many as usual lately, he’s been deadly accurate. Green has simply canned more buckets this season as he continues to improve as an NBA player. While he’s hot, pick him up – especially if you need help in three-pointers. Remember that San Antonio only plays twice next week, so if you pick him up, bench him in weekly formats.

Randy Foye, PG/SG, Utah Jazz: Foye got a Wire Troll nod a few weeks back, and the time has come for another look. The Jazz plays four times next week and Foye has been putting on a show from beyond the arc lately – draining multiple treys in each of the past eight games. He’s sinking more buckets recently and his PT keeps rising as the season has progressed. Foye’s actually seeing his most action this season since he was a budding star on the T-Wolves. What pleases us is that he is not solely relying on the three-ball, but is also periodically driving to the hoop.

Luke Ridnour, PG/SG, Minnesota Timberwolves: Ridnour’s been picking up the pace lately, averaging over 15 PPG in the past five, seeing at least 30 minutes of action in each of those games.

Nick Young, SG, Philadelphia 76ers: Young’s effort has caught the eye of Coach Doug Collins, so he’s seeing much more PT the past few games. The fact that Jason Richardson’s knee will keep him out for the time being helps Young’s cause even more, although note that Young’s hip was barking Friday, so check his status for Saturday before putting in a claim.

Jimmy Butler, SG/SF, Chicago Bulls: Talk about coming out of nowhere. Since Luol Deng went down with a hamstring injury, Butler has stepped into the starting five and delivered one strong performance after another. The second year swingman barely earned any rotation time as a rookie, but he’s suddenly been thrust into a primary scoring role and he’s passed the test with flying colours. Butler had his first career double-double Friday and he’s been sinking far more baskets of late. He’s not much of a threat from three-point land, but his overall shooting touch is much improved this season. As long as Deng is sidelined, Butler is worth a look and even when he’s sent back to the bench, Butler has done enough to earn more rotation time.

Kawhi Leonard, SF, San Antonio Spurs: We recommended Leonard when he returned from a knee injury last month and although he didn’t get as many touches in December, he was shooting well this month before the knee sidelined him again Wednesday. Well, he returned to action Friday and wasn’t shy about hoisting the rock from downtown, canning 2-of-4 long bombs on his way to 10 points, eight boards, four steals and two assists. We remain surprised that Leonard is available in as many leagues as he is. Smart owners will rectify that situation because he’s going to be in line for a lot of open looks from outside in that Spurs’ offense. Once again, the Spurs only have two games next week, so keep Leonard on the sidelines in weekly formats.

Landry Fields, SF, Toronto Raptors: Fields’ PT has been all over the map recently, so this is probably just a deep league option, but his shooting touch has been rock solid lately.

Byron Mullens, PF/C, Charlotte Bobcats: When we last checked in on Mullens a few weeks ago, he was losing PT and then a couple of weeks later, he went down with a serious ankle sprain and has yet to return. That’s about to change, however, as he has stepped up his rehab and is aiming to rejoin the team on the Bobcats’ upcoming road trip, which starts Monday and runs through February 6. Mullens doesn’t offer the type of high FG percentages you normally associate with big men, but he’s seen way more action than ever this season and has developed an outside game to compensate for his low percentages from the floor. Stash him now if you need big man help.

Kendrick Perkins, C, Oklahoma City Thunder: In mid-December, we recommended Perkins and while he shot poorly last month, his work on the glass has been better in January. This is a seriously deep league special only, but the less than graceful veteran is seeing a bit more PT recently. Still, his ability to get to the line has regressed for several seasons, so this is one of those “as long as he keeps starting, he’s worth looking at” situations. Like we said, deep leaguers only need apply for Perk, and with OKC playing just two games next week, he’s more of a daily league option.

Kosta Koufos, C, Denver Nuggets: Koufos keeps showing us the good (a fourth double-double of the season Wednesday) and the bad (major foul trouble of late including a DQ Wednesday). Even with all the fouls, his PT is up lately, so give him another look in deep formats.

Brendan Haywood, C, Charlotte Bobcats: Need a centre and need him now? If you can’t wait on Mullens, Haywood continues to provide low-end value in his stead, pulling down nine boards Wednesday and throwing a block party last weekend. What can we say? Centre is a black hole in Fantasy basketball, my friends.

By RotoRob
This entry was posted on Saturday, January 26th, 2013 at 2:04 pm and is filed under BASKETBALL, RotoRob, The Wire Troll. You can follow any responses to this entry through the RSS 2.0 feed. Both comments and pings are currently closed.