The Wire Troll: Al-Farouq Aminu is Cleaning the Glass 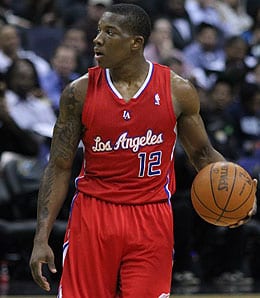 Eric Bledsoe has been starting with Chris Paul hurting.

LeBron James had a hell of week, on Wednesday becoming the youngest player in NBA history to reach 20,000 points and then going off for 39 points against the Lakers the next night; San Antonio keeps rolling, opening up a four-game lead on fourth place Memphis in the West; and Kevin Durant exploded for a career best 52 points Friday to lead the Thunder to a sixth straight win, cooling off a hot Mavs team in OT.

Note that the Clippers play five times next week, so make sure that even fringe players on this team are active for your Fantasy squad. And when you’re setting your lineup, check if any of your players have dates against the Bobcats; if so, make sure they are active.

Eric Bledsoe, PG, Los Angeles Clippers: Ever since Chris Paul and Chauncey Billups arrived in LA, Bledsoe has been an afterthought unless injuries thrust him into a larger role. With CP3 currently nursing a bruised kneecap, Bledsoe has started the past few games, once again emerging with some value. At this point, Paul is expected back any day, but if this injury lingers into next week, Bledsoe will be huge with the Clips on tap for five games. Bledsoe has averaged 6.5 boards in the past two games, has eight steals over the last three games and the youngster is having a career year as he proves he can be a weapon off the bench for the Clippers. Even when Paul returns, Bledsoe could retain value in deeper formats.

Iman Shumpert, PG, New York Knicks: When Shumpert returned from his knee injury last year, we recommended him as a wire pickup. Flash forward 54 weeks, and he has just returned from another knee woe (ACL surgery), making his season debut Thursday and getting the start. Shumpert was limited to 15 minutes in his first game, but he still managed to drain a pair of treys while filling the stat sheet with eight points, two boards, an assist, a steal and a block. He may only be starting because the Knicks don’t want his knee to stiffen up after shootaround, but he may also entrench himself in the starting five. Either way, if you need help in treys, Shumpert is a great dude to grab.

Jerryd Bayless, PG, Memphis Grizzlies: Since returning from an ankle injury a couple of weeks ago, Bayless has been getting more burn. The production should follow, so give him a look in deep leagues.

Devin Harris, PG/SG, Atlanta Hawks: Lou Williams hurt his knee Friday, giving Harris a chance to build on his recent success. Harris has averaged 34 MPG the past two, so give him a look.

Al-Farouq Aminu, SF, New Orleans Hornets: In our season debut of the Wire Troll we recommended Aminu and he shot well in November, didn’t rebound as well in December, but has picked up his scoring again this month (including an 18-point effort Wednesday), yet is still available in about three quarters of leagues. Scoring isn’t really what it’s about for Aminu, but over the past five he’s averaged over 10 boards, nearly a block and 1.4 steals per game. We love the work on the glass out of a small forward and it’s obvious that losing his starting job and taking a few DNP-CDs last month snapped him out of his slump. Now that Aminu’s back in the starting five, he’s worth another look.

Wilson Chandler, SF/SG, Denver Nuggets: Heading into the season, we had Chandler 20th in our Small Forward Rankings, but thanks to a hip woe, he hasn’t even been among the top 100 at the position. Well, he’s back now after a two-month hiatus and his return has helped Denver get as hot as it’s been all season. Tuesday, Chandler canned the game-winning three-pointer in OT and after sitting Wednesday, he returned Friday as he gets eased back into heavier minutes. He only scored four points Friday and will be subject to occasional resting, but Chandler is worth grabbing in leagues with 14 teams or more with the hope that he gains strength and consistency in the second half.

Danny Granger, SF/PF, Indiana Pacers: Granger (knee) has been participating in non-contact drills and is on schedule to return in early February, so stash him now.

Derrick Favors, PF, Utah Jazz: Big Al Jefferson and possibly even Paul Millsap are expected to be dealt at deadline, so Favors should be a beast in the second half. Now’s the time to scoop him up.

Andrew Bogut, Golden State Warriors: Just a week ago, we alerted you that Bogut was making progress with his ankle injury and he’s now taking the next step, walking through shootaround Friday. This means his return is imminent, so now is the time to pounce. Yes, we all know how injury prone the big man is, but when he’s on, he’s a beast and one of the best defenders in the association. Sure, there will be rust from a two and a half month absence, but if you need help at centre, Bogut is widely available now. A week from today, he won’t be.

Greg Stiemsma, Minnesota Timberwolves: Heading into the season, we ranked Stiemsma just outside the top 30 in our Centre Rankings, but given how poorly he’s shot and how little PT he’s received, he hasn’t even been a top 70 player at the position. However, that’s all about to change thanks to a wave of injuries in Minny. Nikola Pekovic is the latest to join the walking wounded for the Timberwolves, who are already missing Kevin Love, Brandon Roy, Chase Budinger and Josh Howard (who was released after tearing his ACL). And that’s just the frontcourt injuries. It’s been a long haul for Stiemsma, who had to play overseas and in the NBADL before finally getting his shot with the Celtics last season. If you need help in blocks, this is a great speculative add, because he’s expected to get a chance to start and finally show what he can do for Minny.

Ed Davis, C/PF, Toronto Raptors: Davis’ scoring is way up of late, but Friday he flashed serious all-around ability, scoring 18 points with 10 boards, six assists, two blocks and a steal. He won’t be available in more than half the leagues much longer.

Elton Brand, C/PF, Dallas Mavericks: Brand scored 20 points Monday and then racked up back-to-back double-doubles, the first of which was the 400th of his career.

By RotoRob
This entry was posted on Saturday, January 19th, 2013 at 1:53 pm and is filed under BASKETBALL, RotoRob, The Wire Troll. You can follow any responses to this entry through the RSS 2.0 feed. Both comments and pings are currently closed.