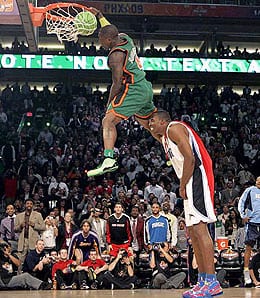 Nate Robinson (top) has been soaring for the Bulls.

Just two weeks ago, we recommended you pick up Jerryd Bayless, and damn, we sure hope you listened, because he’s really getting a chance to shine now thanks to injuries and trades in Memphis.

The most recent of those trades, of course, was the three-team deal that sent long-rumoured on the block Rudy Gay to Toronto. The Raps also got Hamed Haddadi from the Grizz, while Memphis received Ed Davis from Toronto and Tayshaun Prince (look for his value to rise) and Austin Daye from Detroit. The Pistons? They got Jose Calderon’s expiring contract from the Raptors.

Nate Robinson, PG/SG, Chicago Bulls: In late-November we gave Robinson a nod, and after jacking up plenty of treys that month, he upped that by a full attempt per game in December and took even more overall attempts last month, yet remains unowned in nearly three-quarters of leagues. Little Nate can’t drop a dime? He notched 11 of them Friday to go along with a dozen points for his first double-double of the season. Despite a poor shooting performance Friday, he’s been lights out of late and he’s been healthy all season. We also love that Robinson has been taking it to the hoop lately, something that helped him pot a team leading 24 points Wednesday.

P.J. Tucker, SG, Phoenix Suns: In a real rarity, Tucker has established Fantasy prominence over six years after being DNP-CD fodder for the Raptors. Of course, later that season, Toronto would waive him and he’d spent the next five seasons with various teams across the globe. Tucker returned to the NBA this season and out of nowhere, he’s taken minutes from much more heralded Michael Beasley. Tucker keeps playing bigger minutes lately and despite shooting poorly Friday, he salvaged his Fantasy night with eight boards and three steals. Last weekend, Tucker bagged the first double-double of his NBA career and the fact that he’s secured a starting spot is one of the best stories of the first half. It’s surprising that he didn’t wind up playing out his career overseasons; the fact that he’s suddenly Fantasy relevant is an ever bigger shock.

J.J. Barea, PG/SG, Minnesota Timberwolves: Barea has asked his teammates to be tougher. He’s been tough on opponents lately, getting at least 11 points in seven straight games.

Tony Allen, SG, Memphis Grizzlies: With Gay gone, Allen has averaged 32.5 MPG in the past two contests, doing yeoman work on the glass (8.5 per game) for a two-guard.

Michael Beasley, SF/PF, Phoenix Suns: Beasley was losing PT to Jared Dudley and then Tucker, but since Coach Alvin Gentry and the Suns decided it was time to part ways, Beasley’s been getting more chances. Friday was an ugly shooting performance, yet he still pitched in with six boards, a block and a steal. With the Suns on tap for a four-game week, we expect Beasley will continue to put his awful start in the past. He is really shooting better lately, even as he’s sunk fewer three-pointers in the past month. Beasley got plenty of time in the starting five earlier this season, and if his recent uptick continues, he could force his way back into that role. Bear in mind that the second overall pick from 2008 just turned 24 last month, so don’t you dare assume that he can’t still break through and deliver on that promise.

Trevor Ariza, SF, Washington Wizards: Ariza’s Fantasy-friendly game is a bit more appealing right now with Bradley Beal hurting. On Wednesday, Ariza scored 12 points with five boards, three treys and a block and on Friday he nailed another long bomb with a couple of steals. We expected him to be a top 20 small forward this season but thanks to way less PT and a FG percentage that’s way worse than usual, Ariza hasn’t even been a top 60 player at the position. Of course, he also missed 18 games with a calf injury – and that’s affected his overall ranking in a big way. Still, consider him a decent stash candidate, because there’s a chance Ariza could wrestle the starting SF gig back and, with of his defensive presence, he’ll always earn decent minutes, making him at the very least a low-end option.

Martell Webster, SF, Washington Wizards: If Ariza doesn’t turn your crank, try the starter – Webster. His back is finally healthy and he leads the NBA with six four-point plays this season. What? That’s not a category in your league?

Caron Butler, SF, Los Angeles Clippers: With Matt Barnes suspended Friday, Butler got even heavier minutes and even while the Clips got smoked in the Big Smoke, he kept fighting until the very end, and we do mean the very end. Douchey move or not? Who does that? Whatever. Butler’s PT is way up and he’s producing, so grab him.

Brandon Bass, PF/C, Boston Celtics: Heading into the season, we ranked Bass 30th in our Power Forward Rankings. Unfortunately, he hasn’t even been a top 50 PF as his role has diminished and he’s simply not getting as many buckets thanks to the emergence of rookie Jared Sullinger. Well, Sullinger underwent season-ending back surgery Friday, thrusting Bass back into a larger role. In the past two games, Bass has averaged 32 minutes, pitching in with 12 points and three steals Wednesday and then seven boards as the starter on Friday. He just lost his starting PF job to the rookie a couple of games ago, but Sullinger’s injury has handed the job right back to Bass.

Taj Gibson, PF/C, Chicago Bulls: Gibson got a Wire Troll nod from us in mid-November and it was a decent call as he sunk more buckets in November, before seeing less PT in December. And while he struggled from the line last month, his production has been up significantly. Now, with Carlos Boozer (hamstring) hurting, Gibson has been starting – and excelling. Gibson had to play all 48 minutes Friday, so he was gassed afterwards, but he once again flirted with a double-double and continued a block party that has seen him swat 11 shots in the past four games. It would be nice to see him get to the line more often, but as a short-term pickup, he looks like a nice play with that centre qualification.

Aaron Gray, C, Toronto Raptors: Since Davis has been dealt, Gray has been racking up the boards, averaging 11 per game over the past three. Jonas Valanciunas returned Friday and Andrea Bargnani is not far behind, so this is a short-term grab only.

Bismack Biyombo, Charlotte Bobcats: Biyombo had a double-double last Saturday, flirted with another on Monday and then blocked a pair Wednesday. Needs blocks? He averaged two per game last month and has swatted an average of 3.2 over the last five games.

By RotoRob
This entry was posted on Saturday, February 2nd, 2013 at 12:19 pm and is filed under BASKETBALL, RotoRob, The Wire Troll. You can follow any responses to this entry through the RSS 2.0 feed. Both comments and pings are currently closed.