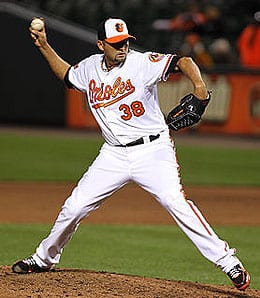 Luis Ayala was a real workhorse in a solid B-More bullpen.

The Baltimore Orioles were one of baseball’s best stories this year – a Cinderella squad that almost knocked off Goliath for the AL East and wound up upsetting two-time defending AL Champion Texas in the Wild Card game before succumbing to the Yankees in the ALDS.

All season long we talked about how the O’s were doing it with smoke and mirrors, but today we wanted to highlight one of the team’s real strengths – the bullpen. Without this surprisingly effective collection of relief arms, there’s no way Baltimore would have made the playoffs this year.

The Orioles’ bullpen comprised a collective 3.00 ERA – good for fifth in the majors and third among AL clubs. It was the best bullpen in the AL East by far – yes, even better than the vaunted Yankee pen.

Now let’s meet some of the arms that helped usher in much of B-More’s success and allowed the team to go 76-0 when leading after seven innings.

It’s been over three years since Luis Ayala popped up on the Fantasy radar, but he offered value in deeper AL-only leagues this year as he paced the Orioles in relief innings and enjoyed a very fine campaign. The O’s rewarded him by exercising his 2013 $1 million option after he gave up just one earned run or less in 59 of his 66 appearances.

Getting a performance like that from a veteran (Ayala turns 35 next month) is a huge reason why Baltimore’s bullpen was such a pleasant surprise.

After his comeback effort with the Yankees in 2011, several teams were after Ayala but the Orioles landed him; who would have thought it would be such a key acquisition?

Given his first extended opportunity to close, Jim Johnson was absolutely lights out, emerging as a must-own Fantasy asset along the way. In an early October Podcast, we talked about what a shock it was that he and Fernando Rodney combined for almost 100 saves this season. Wow.

Okay, so Johnson’s postseason gopheritis was ugly, but no one can take away how unhittable he was en route to a major league leading 51-save regular season which included his first All-Star appearance.

He gets no Fantasy love, but Darren O’Day emerged as a decent AL-only option with a tremendous comeback season. The sidearming righty finished second on the O’s in holds and enjoyed his highest WAR ever. He was incredibly valuable to Baltimore all year long and come playoff time, he was even better (seven innings, one hit, no runs, one walk, five strikeouts, three holds).

Pedro Strop also offered AL-only league value and was a Wire Troll recommendation in September, so of course he winds up struggling with his command down the stretch and slipping behind O’Day in the pecking order. D’oh! Still, Strop led Baltimore in holds and wound up getting more action than ever before, earning a career high five wins along the way.

He has a really great arsenal, which includes an overpowering heater, and we’ll get a chance to see Strop in the WBC in March when he pitches for the Dominican Republic.

Part of the return the Orioles got from Houston in the Miguel Tejada trade, Troy Patton finally established himself as a full-time big leaguer and enjoyed a breakthrough campaign – just in time for arbitration eligibility as a Super Two. The southpaw saw more action than ever, was less hittable and trimmed over half a run from his ERA. If not for a higher home run rate, Patton’s numbers would have been even more impressive.

Now 27, Patton was one of the Orioles’ top prospects a couple of years ago, so it was great to see him finally deliver on his promise.

Early in the season, veteran Kevin Gregg was passed by Strop on the depth chart and in September the Orioles finally cut bait on the two-year contract they gave Gregg in 2011 when he was signed to be their closer. He was way too hittable and got off to an awful start en route to his worst season since 2005. The switch at closer this year from Gregg to Johnson was the biggest reason Baltimore’s pen was as great as it was. He finally just pitched his way out of a job.

Matt Lindstrom was having a nice year in the B-More bullpen, but he too was passed by Strop before getting dealt to Arizona for Joe Saunders in late-August. If not for the depth of the Orioles’ relief corps, they would not have been able to make this move to beef up their rotation. Before the trade, Lindstrom had reduced his hit rates and upped his strikeout rate.

By RotoRob
This entry was posted on Monday, December 31st, 2012 at 1:17 pm and is filed under BASEBALL, RotoRob, Team report. You can follow any responses to this entry through the RSS 2.0 feed. Both comments and pings are currently closed.