Can Orioles Stop the Bleeding? 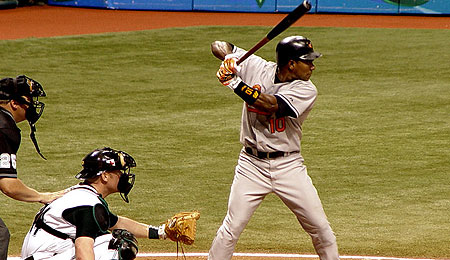 Dealing long-time offensive leader Miguel Tejada to Houston was the centrepiece in an offseason of change for the Orioles.

In an effort to stop a streak of losing seasons that dates back to 1997 – the team’s last playoff appearance – including three straight years of declining win totals, the Baltimore Orioles underwent some major changes this offseason.

Gone is Miguel Tejada, long the cornerstone of this team’s attack, as middling as it’s been in recent years. Gone is Erik Bedard, the oft-injured but undisputed ace of the Orioles.

The loss of Bedard will likely hurt even more, but in return, Baltimore got a tremendous outfield prospect in Adam Jones, a man who could team with current star Nick Markakis to turn a weak area into a strength for the O’s. Baltimore also got four arms in this deal: lefty reliever George Sherrill, who could close in a pinch, but if nothing else, is a very dominant lefty specialist; Chris Tillman, who was the Mariners’ Minor League Pitcher of the Year last season; Tony Butler, also a strong pitching prospect; and Kam Mickolio, who could turn into a decent middle reliever.

The de facto ace left in Baltimore is Daniel Cabrera, a maddeningly great talent who has consistently teased us with his potential, but never fulfilled us with his results. Steve Trachsel, Lance Cormier and Greg Aquino are among other arms the team has brought in to add some depth, something that was sadly lacking last year as one by one, the Orioles’ starters succumbed to injury, while the bullpen also took its licks.

In manager Dave Tremblay’s first full season at the helm, it stands to reason that this team could get worse before it gets better. Moving Tejada, although hurting the team offensively, at least gets rid of a potential headache given the steroid allegations that surround him in the wake of the Mitchell Report. The O’s have already dealt with enough grief in that area with Brian Roberts and Jay Gibbons each getting fingered for PED infractions.

Having said that, gone are the unwieldy, multi-year contracts to veterans that handcuffed the Orioles’ efforts to move forward for years. This team has undergone a major makeover and is now young – not among the youngest in the majors, but definitely on the young side.

Whether getting younger also means getting better remains to be seen in this case, and it wouldn’t shock me if this team struggled to reach 65 wins. But some hard decisions were made this winter, and some of these moves have a chance to pay off before the end of the decade as the O’s look to break an 11-year losing skid.

By RotoRob
This entry was posted on Wednesday, February 20th, 2008 at 4:46 pm and is filed under BASEBALL, RotoRob, Team report. You can follow any responses to this entry through the RSS 2.0 feed. You can skip to the end and leave a response. Pinging is currently not allowed.