The Wire Troll: Invasion of the Top Prospects 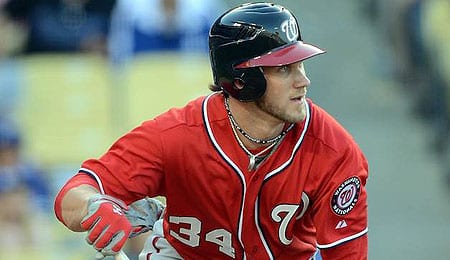 Ready or not, Bryce Harper is now a big leaguer.

Tim is away this weekend (but not to worry — he left me detailed instructions), so the Wire Troll falls to your trusty editor this week. And what a week it’s been, especially this weekend as we saw some serious highly-touted talent get the call to the Show. On to this week’s Fantasy baseball waiver wire picks…

Mike Trout, OF, Los Angeles Angels: The Angels – off to a crappy start – decided to shake things up, releasing Bobby Abreu and bringing up top prospect Trout. You can bet they didn’t recall him to collect splinters and with Peter Bourjos off to a lousy start and Vernon Wells not exactly tearing it up, Trout is going to get some burn. The kid was making a mockery of Triple-A, batting over .400 with 21 runs (in 20 games!), one dinger, five triples and six swipes. No. 3 on the RotoRob Top 55 Prospects list this season, Trout has also shown an improved batting eye (11 walks, 16 strikeouts). This 20-year-old uber talent is clearly much more prepared for the bigs than he was last year when he struggled in a 40-game stint.

Bryce Harper, OF, Washington Nationals: Harper — one of the two players ahead of Trout on our Top 55 Prospects list (No. 1, in fact) — was also recalled this weekend. There’s definitely some question about whether he’s ready for this, and it’s also reasonable to wonder whether this is a short-term stint while Ryan Zimmerman is on the DL, or if Harper is here for good. He was only hitting .250 through 20 games at Triple-A with very little extra-base pop, so it will be interesting to see how he fares in his first taste of the bigs. Harper came through with his first big league hit on Saturday in LA and even Dodger fans were excited; in fact, one was so stoked he felt it necessary to show his ass to the world. Harper may one day be a star, but on Saturday the only visible heavenly body was Uranus.

Tony Campana, OF, Chicago Cubs: Heading into the season, we had Campana ranked as a top 125 outfielder, but even though he started the year in the minors, he’s already been vastly better than that, currently performing at a top 75 level. He’s a real offensive instigator, specializing in distracting opponent hurlers, and in the week and half since being promoted from Triple-A, Campana is carving out a role for himself on the offensively-challenged Cubs, swiping five bases in four games before Saturday. He’s combining with Starlin Castro to give Chicago a much-needed spark near the top of the lineup. Extra-base pop is not his thang, but Campana is playing well enough that it’s hard to imagine he’s not going to stick and the fact that he moved up to the two-hole last week is another promising sign.

Scott Downs, RP, Los Angeles Angels: We did mention the Angels are shaking things up, right? A top 70 reliever in our pre-season relief pitcher rankings, Downs has actually underperformed slightly so far, but that could all change now that he’s replaced Jordan Walden, who’s been “temporarily” removed as the Angel closer. After all the drama that Walden brings to the table, how soothing was it for LA to see Downs toss a 1-2-3 ninth Saturday to bag his first save? No one knows how temporary this gig is for Downs, but one thing we all know is that this dude is hard to hit. Who cares that as a soft-tossing lefty he doesn’t fit the closer profile? Downs gets people out and that’s what you need in the role.

Pedro Strop, RP, Baltimore Orioles: With Jim Johnson suffering from the flu, Strop has stepped in and temporarily grabbed the O’s closing gig, vaulting past Kevin Gregg and Matt Lindstrom in Baltimore’s bullpen. Acquired from the Rangers last summer for Mike Gonzalez, Strop has pretty much come out of nowhere to earn two holds, two wins and two saves (back-to-back) in his last six outings. He’s improved his control and his ratio has been phenomenal even if his ERA is up slightly. Strop should retain value even when Johnson returns and has now arrived as the official closer of the future in B-More.

Addison Reed, RP, Chicago White Sox: To the surprise of many, Hector Santiago grabbed the closer role for the Sox, but he’s blown two of his last three saves chances. And despite Robin Ventura standing behind him (and sort of staking his managerial reputation on this choice), the leash has to be getting shorter here. Jesse Crain has landed on the DL, so the replacement options come down to Matt Thornton or Reed. Reed is the most skilled reliever the White Sox have, and he has a real chance to be earning saves this season – sooner if not later. Smart owners have already been adding Addison and while he’s not striking out batters at the same rate as last year, he’s not being touched on the scoreboard – and we mean at all. Chicago’s bullpen is very young, giving Reed a chance to establish himself as a long-term closer very soon.

Brandon Belt, OF/1B San Francisco Giants: Aubrey Huff’s anxiety issues have given Belt a chance to prove he belongs in an MLB lineup every day.

Michael Saunders, OF, Seattle Mariners: Saunders smoked two dingers Friday, including a grand salami, further entrenching himself as the every CFer — at least until Franklin Gutierrez comes back in June.

Mitchell Boggs, RP, St. Louis Cardinals: Boggs’ great start has seen him ascend to the primary set-up role and with Jason Motte struggling, he’s just an injury (or a complete implosion by Motte) away from having serious value.

Nick Hundley, C, San Diego Padres: Hundley started slowly, but is starting to roll and has spent most of his time hitting in prime RBI slots in the Padre lineup, so if he’s still on your wire, grab him while you can.

Jason Hammel, SP, Baltimore Orioles: Hammel has looked phenomenal so far and is even striking out hitters this season. WTF? Grab him while you can while he’s flying off the wire.

By RotoRob
This entry was posted on Sunday, April 29th, 2012 at 1:50 pm and is filed under BASEBALL, RotoRob, The Wire Troll, Tim McLeod. You can follow any responses to this entry through the RSS 2.0 feed. Both comments and pings are currently closed.