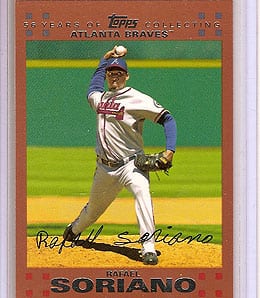 The closer job share in Atlanta is over with Rafael Soriano’s brilliant pitching of late.

Chad Qualls’ job became much safer with the trade of Tony Pena to the White Sox as there is one less arm to look out for. Keep in mind, however, that other teams are sniffing around about Qualls, but the Snakes are unlikely to deal him unless they get an offer they can’t refuse. On the field, Qualls had a shaky save his last time out, but has pitched extremely well this month. His control, in particular, has been very impressive this season.

Jon Rauch has progressively gotten better as the season has gone along and could become an option should Qualls falter. He’s the clear No. 2 man in the D-Back pen, and should ‘Zona deal away Qualls, Rauch has to be first in line for saves. As things currently stand, however, Rauch only has value in extremely deep NL-only leagues.

Rafael Soriano has emerged as the go-to guy in the Atlanta pen, earning saves in seven straight appearances until Sunday. His ERA hasn’t been above 1.64 all season long, and right now, he’s pitching as well as any closer in the game. Meanwhile, although he’s been slightly easier to hit than last season, Mike Gonzalez hasn’t been a slouch at all this year. July, however, has been a rough month for him. He not only lost his closer gig to a streaking Soriano, but he’s been getting hit hard and missed a week and a half recently because of elbow issues. He’s still worth owning in most leagues because of the volatility of closers, but Gonzalez has been winding up on a few wires.

I’d keep an eye on Boone Logan. The way he’s pitched recently, it wouldn’t shock me to see him usurp Gonzalez as the top lefty in the Brave pen. Logan, who came to the Braves from the White Sox in the Javier Vazquez deal, is not currently an option, except in very deep NL-only leagues, but he bears watching.

With Matt Lindstrom on the DL with an elbow injury, the Marlins having been using Leo Nunez and Dan Meyer to close out games. Nunez has been prone to the long ball, but has had a pretty decent season and seems to be the favourite for saves, as the team is mostly going situational, leaving the righty Nunez as the main man with five saves so far. Stranger yet, Nunez is available in almost all leagues still. However, Meyer has incredible numbers this season, and could grab his share of saves.

Note that Lindstrom had a bullpen session Sunday, and will toss a simulated game Wednesday. If everything is groovy after this, he’ll head out on a rehab assignment and could be back early next month.

The Marlins recently acquired Luis Ayala from the Minnesota Twins (who had DFAed him even though he wasn’t that bad) to bolster their bullpen. Manager Freddi Gonzalez has indicated that he might consider using Ayala to close games in the second half of the season, but that strikes us as a serious longshot considering the numbers of Nunez and Meyers and the fact that Lindstrom could be back within a couple of weeks. But I suppose it’s something worth keeping an eye on. If you’re a gambler, you should consider taking a flyer on Ayala in deeper NL-only leagues.

Jonathan Broxton has been dealing with a toe injury that is expected to nag him the rest of the season. It’s time to somewhat lower your expectations of Broxton since there will be times he’s unavailable and the toe is sure to affect him. He’s had a rough July, but has looked a bit sharper lately, and he’s still saved 23 of 25 this year. Not too shabby.

However, Joe Torre named Guillermo Mota as his closer the weekend before the All-Star break when Broxton couldn’t go, but it was Ramon Troncoso who got the save right before the break. Troncoso has great numbers and hasn’t given up an earned run in over a month. He’s got five saves on the year compared to Mota’s none which should tell you something. Consider Troncoso a decent pickup in NL-only leagues.

Do note, however, that Mota has been blazing, and also hasn’t given up a run in over a month (although he’s struggled with allowing inherited runners to score). He’s worth considering in a deep NL-only league.

Billy Wagner is scheduled to return some time in the second half, but he’s stated that he doubts he’ll be used much — and probably not in a set-up role. If you’re looking to next year, Wagner might be a decent gamble if you have space. He was a top closer before he got hurt and could be again although at his age (37), you have to start to wonder. He’ll be a free agent at the end of the year and some team will probably take a look at him (the Nats could sure use the help, for instance). If he performs well in his comeback and you’re in a keeper league, snatch him up.

Matt Capps had a horrific outing on July 11 when he turned a non-save situation into a loss. His ERA is currently a career-worst 5.81 and his WHIP is equally unappealing. The Pirates recently traded for former Washington closer Joel Hanrahan. Fortunately for Capps owners, Hanrahan was pretty horrific this year as closer so it’s doubtful that he’ll get a look. Lefty John Grabow has had a decent season, pitching especially well lately, and might get a look if Capps can’t start closing games efficiently. It’s been over a month since Grabow allowed an earned run, and he’s starting to garner interest as a trade target for some teams with the deadline approaching.

Mike MacDougal is the best option the Nationals have in the bullpen right now, but he’s shaky at best (how about one K vs. eight walks this month?). MacDougal tends to make every outing an adventure only to pull it out of the fire. That can give managers fits, and new National field boss Jim Riggleman may not have the heart to stand MacDougal’s wild ride. Joe Beimel could factor in here (although he could be dealt) and Sean Burnett has been impressive since coming over from the Pirates. He’s got a wide array of pitches that he uses well and he might force himself into the closer picture before the year is out.

By Todd Habiger
This entry was posted on Tuesday, July 21st, 2009 at 12:32 pm and is filed under BASEBALL, Saving Grace, Todd Habiger. You can follow any responses to this entry through the RSS 2.0 feed. You can skip to the end and leave a response. Pinging is currently not allowed.