The Awards ceremony surges forward today as we move onto the diamond and examine the heroes and goats from the 2012 MLB season.

Without further ado, let’s announce the winners of the 2012 RotoRob Baseball Awards… 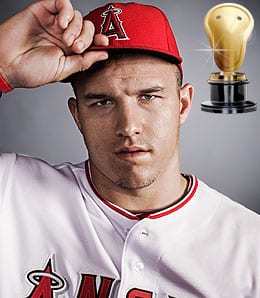 Mike Trout had a season for the ages.

There were so many incredible performances to honour last year, but the most impressive one came from a rookie who wasn’t even in the bigs at the beginning of the season. That’s right, we have to give the hardware to Mike Trout, who made an immediate impact both on the Angels and his Fantasy owners’ teams.

The debate about whether Trout or Triple Crown winner Miguel Cabrera was the best player in the American League in 2012 was among the most spirited discussions in years, but from a Fantasy perspective, this was a slam dunk when you consider Trout’s draft position (or the fact he likely could have been scooped off the wire).

All Trout did was lead the AL in WAR every month from May (his first month in the bigs this year) to August, finishing second in September. Wow.

How much fun will opposing pitchers have facing a lineup that includes Trout, Albert Pujols, Josh Hamilton and Mark Trumbo next year? – RR 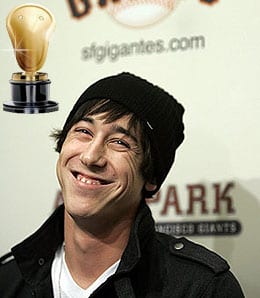 We always tend to avoid calling players who were hurt duds as that’s not really fair. What we’re seeking here is a player you drafted early who spent the entire year on your roster, frustrating you week after week.

There were several candidates here but based on his first half ugliness, Giants’ “ace” Tim Lincecum takes the cake as the 2012 Fantasy Dud of the Year.

In late-October, we conceded that he was a much better pitcher in the second half, but for most Fantasy owners, the damage was done. When a dude you drafted in the third round has already dropped 10 decisions and has an ERA of nearly six and a half at the break, you’re pretty much screwed.

Lincecum, who has the best K/9 in the majors since he arrived in the Show, can still throw the ball by hitters, averaging 9.19 whiffs per nine, but his walks soared to their highest level yet, and that was a killer. He reached double digits in wins for the fifth straight time, but for the second straight year his win total declined. Fifteen losses while pitching for a division winner? Really?

Look no further than Lincecum’s WAR of -2.0 to see what a dud he was. But he’ll be back in 2013, right? Don’t bet on it. Lincecum was moved to relief in the playoffs, but was unable to throw any harder (his fastball velocity dropped significantly during the regular season).

The Giants are trying to beef him up this offseason to increase his durability and really there’s no more important development than a Lincecum rebound if the Giants are going to win the World Series again. — RR 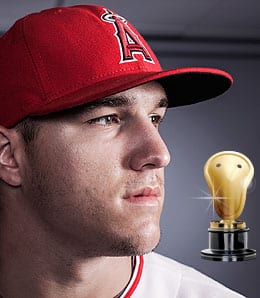 Was there ever a greater rookie season than Mike Trout’s?

Duh. If he’s our Fantasy Stud of the Year, then obviously Trout is also our Fantasy Rookie of the Year. But what the hell else can we write about him? Well, there’s that freaking amazing defense he flashed all year; he threatened Cabrera’s Triple Crown by nearly stealing the batting title; he became just the fourth rookie ever to score 120 runs or more; and he led the AL in runs, steals and WAR.

What Trout did was beyond amazing – it was historic. This was arguably the greatest rookie season in the history of the game. — RR 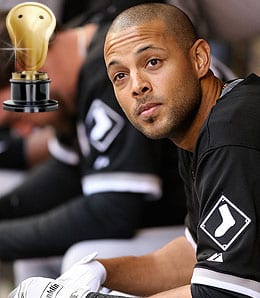 Love him or hate him, Alex Rios returned to Fantasy stardom.

After being considered for the 2011 Dud of the Year award, Alex Rios shockingly bounced back and is our hands down choice as Comeback Player of the Year. In a season that saw the surprising ChiSox contend for the AL Central title, Rios enjoyed one his best seasons in the bigs, smashing 25 homers with 91 RBI, 23 thefts, and a .304 BA. Coming on the heels of his 13 homer, 44 RBI, .227 BA 2011 effort he is a most deserving winner of this award. — TM 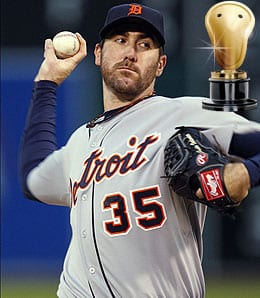 To become a top notch athlete requires so much hard work and discipline – especially in terms of taking care of your body. Right? Um, just ask 2011 Cy Young winner Justin Verlander. On a January appearance on Conan O’Brien, the Tigers’ ace revealed his dietary secret: Taco Bell the night before every start. Seriously? I tried eating 14 chalupas, yet somehow my fastball still paled in comparison to Tim Wakefield’s. WTF? – RR

Impersonator of the Year Award 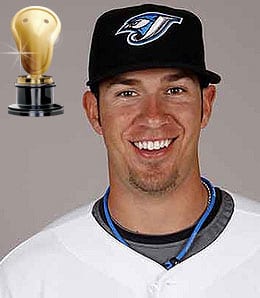 J.P. Arencibia knows a thing or two about riffing on someone.

Many have tried, but Jays’ backstop J.P. Arencibia is hands down the winner as the best Tim Kurkjian impersonator. ESPN columnist Kurkjian should be incredibly proud of this effort as Arencibia demonstrates that a gig opening for Rich Little could be waiting in the wings. 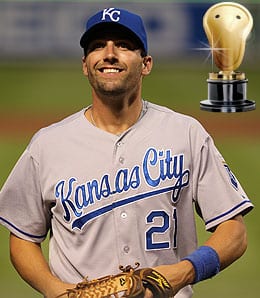 Jeff Francoeur knows how to win over fans: bacon, beer and ‘za.

How could we look anywhere else but Jeff Francoeur? Apparently he enjoys interacting with the fans and he likes bacon, but then again who doesn’t enjoy bacon? After a meat and greet in 2011 with some Oakland fans and apparently a tasty morsel of bacon, the next day Frenchy tossed a ball into the stands with a $100 bill wrapped around it instructing the fans to buy some bacon and beer. He followed that up in 2012 by having 20 pizzas delivered to the faithful in the bleachers in Oakland. A tip of the cap to Mr. Francoeur for taking the time to enjoy both the game and the great fans of the game. — TM 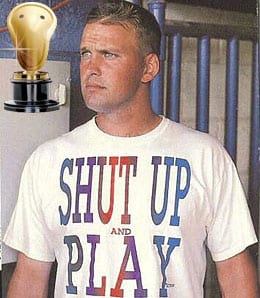 Mark Grace, Carlton Fisk, and Michael Pineda, all of whom had at least one to many pina colodas are co-winners of this award. Isn’t it about time that major leaguers grow up and realize that drinking and driving is not a joke? It’s a crime and one that takes the lives of way too many innocent people. Just ask Matt Bush for his thoughts on this topic, assuming he can remember. — TM

The “Who Me” Award

Bobby Valentine didn’t have much to smile about in Boston.

When Bobby Valentine was hired in Boston it had disaster written all over it and it didn’t take long for this year-long drama (of sorts) to unfold. Confusing Matt Albers with Matt Alberts, insulting the legend of Kevin Youkilis and tossing him under the bus, and having the team mutiny and go to management for resolve were just some of the many highlights of the Valentine regime. Oh, did I mention it was all Big Papi’s fault? The carnival arrived in Beantown in 2012 and Bobby V was the ringmaster of this unmitigated disaster. — TM 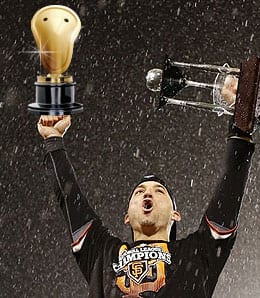 Marco Scutaro was toiling in obscurity in Colorado when the Giants took a chance at the trade deadline and the rest is history. In September he pounded the ball, going 41-for-102 with 21 RBI and 22 runs scored, carrying the Giants into the playoffs. Scutaro didn’t let up come playoff time, winning the NLCS MVP Award and emerging as a key component in San Francisco’s second World Series win in three years. Who in their wildest dreams could envision Scutaro being the key component in this amazing run by the Giants? — TM

Con Artist of the Year Award 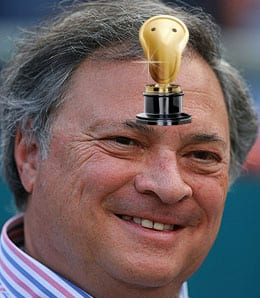 Jeffrey Loria wears his hardware like a crown of shame.

We’d be very remiss if we didn’t find the time to mention that Jeffrey Loria did what he did best, again, in 2012. In 2011, he won this award for convincing the Miami-Dade commission to pay for his new playground and then proceeded to fill his roster with big money top-tier free agents. In 2012, Loria sold them all and has gone back to being MLB’s welfare state. He’s now conned the landlord, his players, Bud Selig and his clubhouse pals in MLB, and the fans in southern Florida, and that’s just in the past two years. It really doesn’t give Loria much room for a run at our Awards in 2013 but knowing his history absolutely nothing can be ruled out. 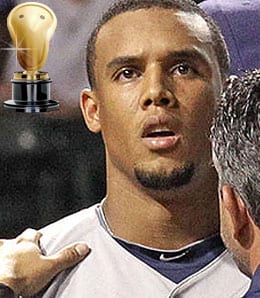 Carlos Gomez knows how to showboat.

Back in July against the Phillies we saw Carlos Gomez tag one and make the obligatory home run trot only to round third base and find the batboy waiting to hand him the bat. The sheepish look on Gomez’s face is worth hardware alone. To add insult to injury, he struck out looking on the next pitch. Heckuva round tripper, Carlos, but next time a quick check with the umpiring crew could save you both the jog and the ribbing he had to have taken in the dugout. — TM

By Tim McLeod
This entry was posted on Tuesday, January 1st, 2013 at 9:22 pm and is filed under BASEBALL, RotoRob, RotoRob Awards, Tim McLeod. You can follow any responses to this entry through the RSS 2.0 feed. You can skip to the end and leave a response. Pinging is currently not allowed.