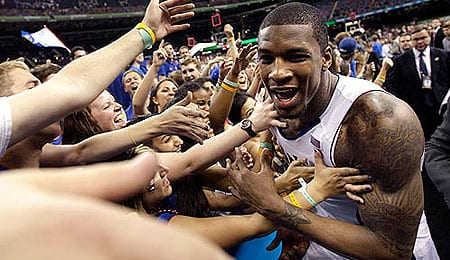 Thomas Robinson is waiting for his chance to win over the Sacramento fans.

With the calendar year winding down, we’re nearly a third of the way through the NBA season – a great time to revisit the 2012-13 rookie class.

Back in late-September, we identified those players who we thought would be the top 10 rookies this season. How are these dudes faring at this stage of their debut seasons?

Anthony Davis, PF, New Orleans Hornets: The former Kentucky star isn’t used to losing, but he’s sure having to deal with his fare share of it in the Big Easy. Davis has already dealt with health woes, missing nearly three weeks in November and December with an ankle injury and suffering a concussion earlier in the season. But when he’s played, he’s made a quick adjustment to the NBA game, flashing occasional scoring punch and improving rebounding and block numbers. The monobrowed one is already a force on the glass, and with an average of 10 boards per game over the last five, he’s only improving in that regard.

Michael Kidd-Gilchrist, SF, Charlotte Bobcats: Another Kentucky product that’s suddenly having to deal with losing, Kidd-Gilchrist has battled rookie inconsistency. He showed what he’s capable of Saturday night with an incredible shooting performance (11-for-14) for 22 points with nine boards, two blocks and a steal, but he’s struggled from the line lately (and isn’t getting there often enough). Still, MKG has been healthy and has been getting enough PT to be a virtually must-own Fantasy asset.

Thomas Robinson, PF, Sacramento Kings: The lottery pick from Kansas simply isn’t getting enough PT to show what he can do. He averaged 20.5 MPG in the previous two games and then took a DNP-CD on Friday. He’s only an asset in deeper league.

Harrison Barnes, SF, Golden State Warriors: Barnes’ PT has dipped of late, but on Saturday he gave us a hint of what he’s capable of, scoring 15 points with eight boards and three treys in 26 minutes. He was aggressive and showed some all-around skills and consistent efforts like that would make him a nice waiver wire option.

Dion Waiters, SG, Cleveland Cavaliers: Waiters is another rook dealing with a tough losing environment, but he’s been one of the few bright spots in Cleveland. This kid’s scoring potential has made him a near must-own player, although he’s been having a tough time sinking his shot of late. As long as you can withstand Waiters’ FG percentage, he’s a nice option.

Damian Lillard, PG, Portland Trail Blazers: Lillard, who flashed his scoring prowess with 20 points Saturday, has been a must-own Fantasy player all year long. He’s slowly been gaining confidence as a distributor, but took a goose egg in the dime department Saturday. On the plus side, Lillard’s outside game has shown improvement and that’s helped him score at least 20 points in over half his games.

Bradley Beal, SG, Washington Wizards: Beal, who missed a couple of games earlier this month because of his back, has been a decent waiver wire option at times this season. His PT is up recently, but it would be nice to see him get to the line more often. Even when Beal’s shots aren’t falling (which is often), he’s not afraid to keep jacking ‘em up – a definite sign of a scorer.

Andre Drummond, PF/C, Detroit Pistons: This kid is only 19, but is starting to prove he can be a very useful Fantasy asset with back-to-back double-doubles. Drummond is a lousy free throw shooter, but after getting sporadic PT through the early part of the sked, he’s getting the burn now. The call for him to move into the starting five in Detroit is underway.

Jeremy Lamb, SG, Oklahoma City Thunder: We had high hopes for Lamb and then he was dealt to a deep OKC squad, where he saw such little PT that he was dispatched to the D-League. Lamb showed he could score down there, earning a recall a couple of weeks ago. Unfortunately, he’s still barely playing if at all, so this tatted rookie is currently not a Fantasy asset.

Perry Jones III, SF, Oklahoma City Thunder: Jones, who has barely seen any action with the Thunder, recently hurt his ankle and has now been farmed out to the D-League. If he gets dealt to the Cavs as rumoured, Jones could get another chance in the NBA.

John Henson, PF, Milwaukee Bucks: This kid has serious potential as a defensive force, but he’s simply not getting enough PT to be an asset at all. Earlier this season, Henson was starting; now, he’s toiling near the end of the bench.

Donatas Motiejunas, PF/C, Houston Rockets: Motiejunas flashed some scoring ability in the preseason and continued to put up numbers in the D-League, earning a recall a couple of weeks ago. That experience will stead him well as he tries to carve out a rotation spot in Houston, but right now, you can ignore him for Fantasy purposes.

Jared Sullinger, PF, Boston Celtics: Sullinger has been lauded for his attitude and he’s starting to get enough action to be worth an add in deeper formats. Boston is starting to give him serious burn in games that are decided, so perhaps he won’t remain underrated for long.

Austin Rivers, SG, New Orleans Hornets: Rivers has been on the periphery of Fantasy value, but a recent scoring drought has sent him back to the wire in most formats. He hasn’t been shooting much from downtown of late and now that Eric Gordon is back, Rivers will have a tough time getting enough burn to be useful. The former Duke star will make an impact in time… just not now.

By RotoRob
This entry was posted on Sunday, December 30th, 2012 at 2:54 pm and is filed under BASKETBALL, Rookies, RotoRob. You can follow any responses to this entry through the RSS 2.0 feed. Both comments and pings are currently closed.