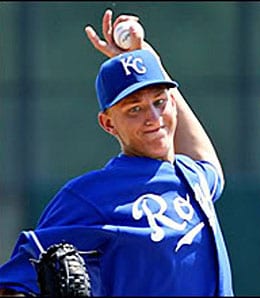 Mike Montgomery will soon be mowing down hitters for the Royals.

The 2011 RotoRob MLB Draft burns on with another chapter in our Top 50 Prospect tome. So while you wonder if the Phillies’ offense can match their pitching this season, let’s take a look at prospects 20 through 11.

Prospects 50 through 41 can be found here
Prospects 40 through 31 are here
And prospects 30 through 21 are here.

20. Mike Montgomery, SP, Kansas City Royals (NR): The Royals’ prospect cup runneth over these days – especially with hurlers, of which Montgomery is the best. This is another player that RotoRob baseball editor Tim McLeod scouted at the AFL, suggesting he can develop into a dominant hurler if he remains healthy. The southpaw was filthy good at High-A, striking out 12 per nine in four starts before forcing a promotion to Double-A, where his results were more modest, but still solid. Blessed with an ideal pitcher’s build (6’5”, 180), Montgomery is a future front-of-rotation starter on a team that has a boatload of such options.

19. Chris Carter, 1B/OF, Oakland A’s (16): While he’s slipped a bit in this year’s rankings, we still believed that Carter had a chance to be a post-hype bargain this year. And the fact that his big league debut wasn’t exactly a smash hit only increases the chances that Carter has serious sleeper potential this year. The power is definitely there, but Carter is going to rack up plenty of strikeouts – and I do mean plenty. However, after he smacked 31 homers in 125 Triple-A games while showing massively improved patience, I’m expecting him to establish himself as a legitimate big leaguer this year.

18. Jameson Taillon, SP, Pittsburgh Pirates (NR): The second overall pick in last year’s draft, Taillon was throwing as fast as 99 mph for his high school, The Woodlands (TX), the same school that produced Kyle Drabek, our No. 14 prospect this year. He’s an intimidating presence on the mound at 6’6”, 225 pounds, and his makeup is reportedly top notch. He’ll likely begin his pro career at Low-A, but Taillon is a special talent that could move fairly quickly for a high school pitcher. At this point, however, he’s only of interest to keeper league owners.

17. Matt Moore, SP, Tampa Bay Rays (NR): Moore bubbled under our top 45 prospects list last year after leading the minors with 176 strikeouts in 2009. But this year, after striking out an eye-popping 208 batters in 144 2/3 IP at High-A, he’s soared into our Top 20. One of the keys of a still jammed-packed Tampa Bay farm system, Moore did a good job of reining in his wildness last year, and while the true test of his prospect status won’t be known until this year when he tackles Double-A, it’s impossible to ignore his potential as dominant starter.

16. Martin Perez, SP, Texas Rangers (10): Perez made our Top 10 last year, but he’s slipped a bit after struggling to an ERA of almost 6.00 in his first full season of Double-A. He remains the jewel of the Ranger system, and with his repertoire of well above-average stuff and smooth delivery, he could still arrive in Texas by next year assuming he masters Double-A this season. Frequently compared to Johan Santana, Perez is often grouped with Brave prospect Julio Teheran because they are both 1991-born pitchers that reached Double-A last year. However, Teheran’s numbers at this level – albeit in a smaller sample size – were far superior, and that’s the difference between a Top five prospect and a Top 20 prospect at this stage.

15. Jarrod Parker, SP, Arizona Diamondbacks (18): Despite the fact that Parker was slated to miss the entire 2010 season, we still liked him as a top 20 prospect last year. Now that he’s healthy again, we like the ninth overall pick from 2007 even more this year. Parker boasts a dominant repertoire that includes four pitches that he can get over for strikes, and now that he’s recovered from Tommy John surgery, he will most likely begin the season at Double-A. There will be some rust, but it wouldn’t shock me to see Parker arrive in Arizona at some point in the second half or earlier if he forces the team’s hand with his performance.

14. Kyle Drabek, SP, Toronto Blue Jays (25): A key piece of the puzzle that Toronto received when it shipped Roy Halladay to Philly, Drabek made his MLB debut last September, and held his own in three starts, buoying hopes that he can be a useful part of the Jay rotation this year. His potential is off the charts, but some of his pitches will need refinement before he’s ready to be an impact pitcher. With Shaun Marcum being dealt to the Brewers, Drabek has a good shot to win a rotation spot, but I have my suspicions that it could be a bumpy rookie season. I love Drabek’s long-term prognosis – his fairly seamless transition to Double-A confirmed that – but I also believe the Jays are under a bit of pressure to rush him to the majors to show a tangible result from the Halladay trade, and that worries me. It wouldn’t shock me to see Drabek spend a fair bit of the season at Triple-A, but he’s poised to have a strong career.

13. Mike Minor, SP, Atlanta Braves (37): Minor looked very impressive in his first four big-league starts, but rather hittable in the next four. Still, you have to be stoked by the command he showed in his first taste of the majors. Taken seventh overall in 2009, Minor was considered by many to be a reach pick by the Braves, but considering he soared through the team’s minor league system in his first full season, Atlanta’s faith in him has been justified. A southpaw out of Vanderbilt, Minor has the inside track on the fifth starter job in Atlanta this year. Don’t sleep on him as a Fantasy asset; he’ll win some games with Atlanta, and given that he averaged over a strikeout per inning in his first go-round, Minor could be a real asset in 5×5 leagues as well. In fact, it wouldn’t shock me if Minor gave teammate Freddie Freeman some competition in the NL ROY race.

12. Eric Hosmer, 1B, Kansas City Royals (NR): When Tim scouted the AFL, he came away impressed by both Hosmer’s size and strike zone judgment. His power is the real deal as he racked up 72 extra-base hits between High-A and Double-A last year, actually raising his slugging by 70 points after his promotion to the higher level. Hosmer will soon team with Mike Moustakas to give the Royals an impressive – and powerful – pair of corner infielders. Hosmer doesn’t have one dominant skill, but should be capable of very solid across-the-board production once he reaches the majors. I see Hosmer’s upside at around .300, 25-to-30 homers, 100-to-110 RBI and about 15 steals.

11. Freddie Freeman, 1B, Atlanta Braves (NR): Freeman made his big league debut last September and despite his struggles, Atlanta is handing him its first base job this spring. Both Troy Glaus and Derrek Lee were allowed to walk to create an opening for this now 21-year-old, who has become Atlanta’s top hitting prospect after batting .319 with an OPS of almost 900 at Triple-A – at the tender age of 20. Freeman stroked 35 doubles in just 124 games last year, and it’s reasonable to assume that some of those two-baggers will start leaving the yard as he begins to add strength to his 6’5” frame. He’s got a sugary sweet swing that should have him in the running for NL ROY honours this season.

By RotoRob
This entry was posted on Sunday, March 6th, 2011 at 8:48 pm and is filed under 2011 RotoRob MLB Draft Kit, BASEBALL, Cheat sheets, Prospects, RotoRob. You can follow any responses to this entry through the RSS 2.0 feed. You can skip to the end and leave a response. Pinging is currently not allowed.