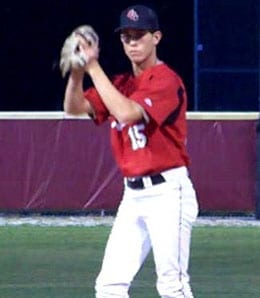 The move to San Diego should accelerate Casey Kelly’s arrival in the majors.

We’re back with more of the 2011 RotoRob MLB Draft Kit as today we unveil Part II of our Top 50 Prospects. So while we wonder if the Oakland A’s can build on that year’s .500 finish and make a run at the AL West or the Wild Card spot, let’s review prospects 40 through 31 as we count down the best young talent in the minors.

You can find prospects 50 through 41 here.

40. Casey Kelly, SP, San Diego Padres (20): A year ago, Kelly squeaked into our top 20 prospects, but after experiencing growing pains in Double-A, he’s clinging to his spot on the list. Kelly was apparently untouchable at the trading deadline last season, but when Boston had a chance to acquire Adrian Gonzalez, the youngster was headed west to the Padres. The move may be a blessing in disguise for Kelly, as not only does he get away from the pressure of being a Red Sox prospect, but he now has a clearer path to the majors. He remains a work in progress (having just converted to pitching full time last season), but his athletic build and feel for pitching have some believing he can be the next Kevin Brown. Yes, Kelly’s bump in the road that was 2010 definitely hurt his stock, but don’t for a second think that he’s no longer a top prospect.

39. Jenrry Mejia, RP/SP, New York Mets (31): In the Mets’ search for pitching, Mejia could be a real wildcard this season. He was brought up to the big leagues as a reliever last year, but was sent back down to stretch out his arm as a starter, however, he developed a shoulder issue. From the sounds of it, he’s fine now and will compete for a rotation spot this spring, but is more likely targeted for the Triple-A rotation. In his first taste of the Show, the youngster had some serious control problems, an issue that’s cropped up from time to time in his professional career. I also worry about the young righty’s frame (6’0”, 162), but there’s no denying he has upside as a No. 1 starter. The Mets believe they have a real gem on their hands with Mejia, so hopefully they will stop screwing with him and keep him as a starter for the foreseeable future. He probably could use at least a half-season in the Triple-A rotation to hone his control before he’s ready to come back to New York – this time to stay, I assume.

38. Hank Conger, C, Los Angeles Angels (NR): We like Conger enough that we included him in our catcher rankings this season. He made his big league debut last year, and while he struggled to hit for average in his brief look, he was productive and showed a decent batting eye. He had some injury problems early in his career, but in the last two seasons, Conger has made great strides both offensively and defensively. He’s ready to make a run at the starting catcher job this spring, but if he doesn’t win it, the Angels are wisely going to send him back to Triple-A to play every day. Conger’s impressive strike zone judgment allowed him to hit .300 at Triple-A, and his ceiling could be as a Victor Martinez type – a high-average catcher capable of nice power.

37. Tanner Scheppers, RP, Texas Rangers (NR): Scheppers spent some time in Indy ball after being drafted, but Texas signed him and he made a mockery of Double-A, forcing a quick promotion to Triple-A. Split between the rotation and the bullpen, Scheppers had some control problems at Triple-A, but make no mistake – this kid is an excellent prospect. The shoulder issues he had in college appear to be a thing of the past, and he can bring the heat in the high 90s and – with his array of secondary offerings – he could start or be a late-inning reliever, perhaps even take over as the Texas closer should the Rangers opt to finally let Neftali Feliz start. Right now, Texas is stretching him out as a starter, so either he’s going to stick with the team as a reliever or pitch out of the rotation at Triple-A. Whatever Scheppers’s long-term role is, he’s going to arrive in the majors very, very shortly.

36. Miguel Sano, 3B/SS, Minnesota Twins (NR): This 17-year-old Dominican has had scouts drooling for the past couple of years given his size and potential. At 6’3”, 195 (and supposedly still growing), he’ll probably outgrow shortstop, and the fact that he spent more time at third base last year is probably proof that the hot corner is his long-term future. But as part of a wave of fine young third base prospects, Sano has a chance to help beef up a position that’s become a bit of a Fantasy wasteland recently. Last season was Sano’s first in North America, and while he showed the kind of patience you expect from such a young Dominican (i.e., next to none), he did hit .291 and flashed some extra-base pop in the GCL. He’ll probably advance to Class-A this season, and while Sano won’t be on redraft league owners’ radar for quite some time, he’s a name you need to be aware of now if you’re playing in a keeper league.

35. Tyler Matzek, SP, Colorado Rockies (NR): Matzek was the top-ranked southpaw in the 2009 draft, and he opted to pass on a chance to pitch for the University of Oregon when the Rockies ponied up a team-record $3.9-million signing bonus. He has a powerful frame for a southpaw (6’3”, 220), but this power pitcher is still raw. Matzek’s best pitch is his fastball, which he throws in the high 80s but can dial up to 93 mph. As a pitcher drafted out of high school, he still needs plenty of seasoning, but his upside is undeniable. In his first pro season, Matzek went 5-1 with an ERA under 3.00 in the Sally League, averaging almost a strikeout per inning. But it’s clear where he needs work: the 6.3 BB/9 sticks out like a sore thumb on his stat line. Matzek will start out at High-A this year, and if he can rein in the walks, he’ll be ready for Double-A by season’s end.

34. Grant Green, SS, Oakland A’s (NR): We surmised that even a year ago, Green must have had current A’s shortstop Cliff Pennington looking over his shoulder. And while some aren’t nearly as high on Green as we are, he did nothing in 2010 to assuage our expectations that he’s going to be a fine major leaguer. The former USC star is tall (6’3”) and lanky (170 pounds), and while he’ll need to fill out to become a legitimate power hitter at the major league level, Green has already shown an ability to hit for high averages at every level. And it is worth pointing out that he did spank 20 dingers at High-A last year in his first full season of professional ball, so it’s already coming. He’s been invited to Spring Training this year as a non-roster player – a tell-tale sign how bullish the A’s are on this kid. Still, he needs another year and a half or so of seasoning to develop a more selective approach at the plate and to work on his fielding. If Green can’t cut it at shortstop, third base could be his ultimate destination.

33. Manny Machado, SS, Baltimore Orioles (NR): The third overall pick in the 2010 draft excelled on Team USA in 2009, but he signed too late last year for us to get much of a chance to see how he’d do as a professional, as he played just nine games. Machado is expected to develop decent power as he matures, and he’s already shown flashes of high average ability, hitting .345 in Low-A. Some are a bit higher on Machado at this stage, but come one – the kid’s 18. I want to see a full season from him before I start moving him into my top 25 or higher. Having said that, the pedigree is there, but is he next Alex Rodriguez? The last time I heard an 18-year-old called the next A-Rod it was Luis Montanez, who came up as a shortstop in the Cubs’ system. I’m not saying the same fate will befall Machado, just that I want to see more from him before drinking the Kool Aid.

32. Yonder Alonso, 1B/OF, Cincinnati Reds (39): Alonso slipped a bit in last year’s rankings, but he’s bounced back to the point where he’s almost a top 30 prospect. Some aren’t nearly as high on him, but I really like what I saw out of him at Triple-A last year, especially since he was adjusting to a new position (outfield). Alonso made his big league debut in September, and while he didn’t exactly tear it up, it won’t be long before he’s back for good. He’s in competition for a roster spot this spring, but realistically, Alonso will likely begin the season in Triple-A. Once he does make it back to Cincy, however, you should pay attention, because he’s got serious power potential.

31. Jacob Turner, SP, Detroit Tigers (NR): Turner was taken ninth overall in 2009, but even as an advanced high school pitcher, he still has a little ways to go before he’s major league ready. He can reportedly reach 98 mph on the gun, but generally throws his heater in the mid-90s. The Tigers have a few starters in their system that will soon be knocking on the door, and while Turner is probably the furthest from the bigs now, his upside is the highest. Don’t expect a huge amount of strikeouts, but his superb control and command will take him far.

By RotoRob
This entry was posted on Sunday, February 27th, 2011 at 5:10 pm and is filed under 2011 RotoRob MLB Draft Kit, BASEBALL, Cheat sheets, Prospects, RotoRob. You can follow any responses to this entry through the RSS 2.0 feed. Both comments and pings are currently closed.