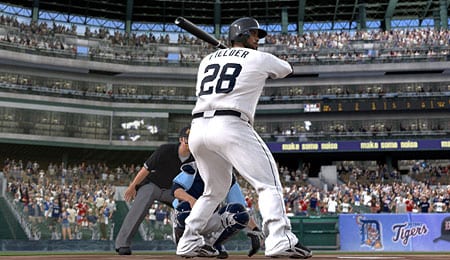 Graphically, MLB ’12 The Show is leaps and bounds ahead of the competition.

This time last year I felt 2kSports had started to close the gap on Sony’s highly regarded baseball title, The Show. Fast-forward to 2012, however, and after spending a couple of weeks with both games it’s clear that MLB ’12 The Show is once again firmly entrenched atop the genre. Most of its changes are under the hood, but fans of the sport should appreciate the uptick in realism they’ve produced.

Give Sony San Diego credit; it just keeps offering new ways for you to play the game. The most notable addition this year is pulse pitching, which has you place a pulsating circle where you want your pitch to go and then try to release when the circle is at its smallest (the smaller the circle the more accurate the pitch). It works fairly well, varying in speed and size based on a number of factors, and makes it more difficult to locate pitches with precision. It’s more realistic in that regard than the traditional meter that practically lets you live on the black, though it does lack the option to determine velocity.

Zone analog batting has also been added. Here you still use the right analog stick to stride (push down) and swing your bat (up), but now the left stick is used to determine where within the strike zone you’ll take your cuts. As you’d imagine this makes it tougher than ever to make solid contact, and driving the ball with authority feels like an accomplishment. PlayStation Move support has been employed in all facets of gameplay (hitting, pitching, fielding and baserunning) as well. Combine that with all the familiar mechanics returning and gamers have an unprecedented amount of options at their disposal.

While the series may have seemed to max out graphically over the past couple years, some new additions make MLB ’12 The Show the best looking game in the series. The biggest reason is the implementation of true ball physics, which really cranks up the realism by having the ball react more authentically than it has in the past. Balls spin in awkward ways, die in the outfield grass and tail away from fielders. It’s really impressive to play game after game and continuously see action on the field that makes you just shake your head; because that’s what it looks like on TV.

Speaking of which, The Show has also gotten a significant overhaul in the presentation department that makes playing a game eerily similar to watching a broadcast. Those willing to embrace a more deliberate pace can enjoy many new additions, such as more dynamic camera cuts, post-swing reactions from hitters and pitchers moving about the mound. Many of these nuances will be lost on gamers that press “X” after each pitch, though the mere fact that they’re included is pretty cool.

After so many years, there’s not much to say about the grouping of Matt Vasgersian, Eric Karros and Dave Campbell. If you’ve invested any notable amount of time into the game the commentary is going to feel awfully familiar — at some point shouldn’t Vasgersian stop questioning the strike zone? Yet, while commentary is status quo, ambient sound has been improved. The crack of the bat and pop of the glove seem noticeably crisper this year, and the ebb and flow of the crowd is solid.

Game to game, inning to inning, the biggest change in MLB ’12 The Show is the aforementioned ball physics. I don’t want to oversell them as revolutionary, but the prospect of having nearly limitless outcomes is something that really pushes the game forward. The most important aspect of any simulation-based sports title is its ability to mimic the real thing, and by making each at-bat feel that much more authentic it really helps make each game different from the last.

Road to the Show (RttS) has once again seen only minor tweaks from last year. Easily the biggest change is the streamlining of your minor-league journey. No longer will your starting pitcher begin his career as a Double-A middle reliever, nor will your middle infielder be relegated to spot starts and pinch hitting duty. Now your career begins with you entrenched as a starter, and while it’s still not the pit stop it is in MLB 2k12, the minor-league portion of your journey isn’t nearly as much of a grind. A few options and new training modes have been added as well, but overall, RttS delivers what you’ve come to expect and little more.

Fine tuning is also the Franchise’s MO for 2012. The player generator for future draft classes has been improved, allowing for a more diverse selection of created players. Trade logic is better as well as teams have a governing trend that helps guide their decision making. For instance, teams that are rebuilding will be hesitant to deal away young talent while big-market clubs will target big-name talent. Those hoping for an overhaul or signature new feature may be disappointed, though it’s hard to criticize the mode too harshly given its already impressive depth.

Joining those two familiar modes is a brand new one: Diamond Dynasty. Here you create a team from scratch that you can tailor to almost the last detail, including a cool logo customizer. Rosters are made up of real major leaguers and fictional players. Once you’ve got your team assembled you can square off against other gamers or the computer to earn a budget.

With your budget you can then purchase additional player cards or train your fictitious talent in a manner similar to what’s used in RttS. The more skilled a player is in a given area, the more it will cost you to improve. This is also true of areas that are vital to that player’s position. Conversely, a higher potential (or aptitude) will make it less costly to build them up. Players also have limited contracts that need to be monitored while unwanted cards can be recycled and so on.

There’s undoubtedly a lot to digest here, and the game doesn’t do you a lot of favours in easing you into the process. You enter some basic information about your club, pick a few primary colours and presto, you’re staring at a roster screen full of unknown names and abstract numbers. Once you get over the hump, though, you begin to see the mode’s potential as it offers yet another way to compete with other gamers for baseball bragging rights.

Unfortunately, much of that potential is squandered by Diamond Dynasty’s reliance on online play, which is once again The Show’s Achilles’ heel. Virtually every foray into online games ended with one or both of us calling it quits because of a poor connection. And if that happens in Diamond Dynasty you incur the double whammy of having the game count on your players’ contracts while simultaneously earning no funds. Bottom line; without better online play (and dissuasive measures for quitting) this mode can’t reach the heights it’s capable of.

MLB ’12 The Show does boast one more notable addition — the ability to share saved game files between your PlayStation 3 console and the all-new PlayStation Vita. I tested this extensively across several modes and was amazed by how well it worked. Uploading and later retrieving files from the cloud couldn’t be simpler. I loved taking the mound from my couch and then seamlessly picking up the game while getting my oil changed. It’s an absolutely fantastic option for those that possess the love of baseball and financial wherewithal to own both versions.

I’ve been playing video game baseball for a long time now, and I’d count MLB ’12 The Show as arguably the purest example of the sport to date. Upgraded presentation and realistic ball physics sound like small things, but in action they add to an already stacked game (not to mention the Vita functionality). Online play is a blemish, but The Show does too much right to let that ruin an otherwise great game.

By Herija Green
This entry was posted on Wednesday, March 28th, 2012 at 6:53 pm and is filed under BASEBALL, Herija Green, Video Game Reviews. You can follow any responses to this entry through the RSS 2.0 feed. Both comments and pings are currently closed.