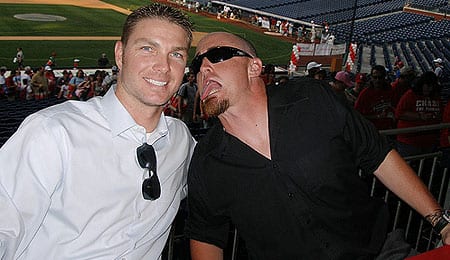 Ryan Madson (left) will have more time to hang out with douchebags now that he’s done for the year.

The 2012 season is underway (sort of), and with it comes a whole new set of discussions. In this week’s episode of RotoRob’s Fantasy Baseball Weekly, both RotoRob and Tim M. were out of action — not to worry, it was for sports reasons in both cases — so Buck brought out some guests in the form of KFFL.com managing editor Tim Heaney and RotoExperts’ executive editor Doug Anderson.

The panel covered a range of topics, including:

Thanks so much to both Tim H. and Doug for pinch-hitting for Tim M. and I this week and be sure to join us every Thursday at 9 p.m. EST on Blogtalkradio.

Listen to the Podcast by clicking the play button below.

By RotoRob
This entry was posted on Friday, March 30th, 2012 at 8:23 pm and is filed under BASEBALL, Buck Davidson, Podcast, RotoRob's Fantasy Baseball Weekly. You can follow any responses to this entry through the RSS 2.0 feed. Both comments and pings are currently closed.