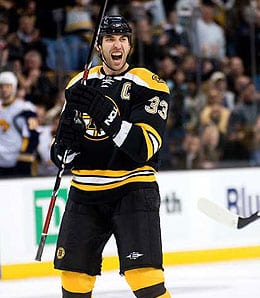 With hockey season around the corner, it’s time to launch into the 2011-12 RotoRob NHL Draft Kit, starting off with a look at the top 40 blueliners in Fantasy hockey.

Defensively, we are in a rare boon in Fantasy leagues. Drafting the No. 1 or No. 2 guy is not the essential, end of the world thing these days. There are at least seven or eight top tier defencemen that can step up and provide you a variety of Fantasy points. Keep in mind that we also include hits and blocks into our equation unlike some leagues. There will always be the Nicklas Lidstroms of the world along with Shea Weber, Zdeno Chara, Lubomir Visnovsky, and company.

There are also gems and sleepers to be had. Look at Matt Taormina in New Jersey or even some of those puck moving defenceman that may just below this list. The best approach is to take a look at the top and bottom of the list, not so much the middle. It sounds strange, but it is quite true. Depth is key when most leagues have four or five slots for your defence corps. Choose wisely and reap the benefits that most do not have.

So while you wonder if Phoenix will be a playoff team without Ilya Bryzgalov, let’s examine the defenceman you most want to target for your Fantasy teams this season.

1. Nicklas Lidstrom, Detroit Red Wings (5): Ho hum. Another season, another Norris Trophy as the league’s top defenceman for Lidstrom. Yes, he’s eventually going to retire, but after playing all 82 games for the second straight season and enjoying his finest offensive season since 2007-08, Lidstrom opted to return for another campaign. His +20 ranking last season was his lowest since 2003-04 and he didn’t take as many shots, but we’re quibbling at this point. The Wings’ captain remains a Fantasy stud.

2. Dustin Byfuglien, Winnipeg Jets (NR): You can easily make the argument that the 2010 RotoRob Fantasy Comeback Player of the Year could rank on top of this list. After all, he posted his first 20-goal season, all the more impressive given that he spent most of his time with the Blackhawks as a forward before Atlanta shifted him into a full-time blueliner last season. Now he’s charged with being one of the key attractions as the NHL makes it return to Winnipeg.

3. Lubomir Visnovsky, Anaheim Ducks (23): As we projected last season, the retirement of Scott Niedermayer meant big things for Visnovsky’s offensive output. Well, a season after racking up his second career 50-assist campaign, he’s a clear top five player at the position. His power play goal total didn’t exactly soar, but he still wound up leading all defencemen in points.

4. Zdeno Chara, Boston Bruins (9): Chara lost out on bagging his second Norris Trophy in three years, but he still managed to record his fifth straight 30-assist campaign. So, as long as he’s not lynched during one of Boston’s visits to Montreal, you can again count on fine production from the big man.

5. Keith Yandle, Phoenix Coyotes (28): We expected Yandle to be a top 30 defenceman last season, but he broke out in a huge way and we wouldn’t blame you if you reached for him even earlier than this. He’s durable, and although his goal total last season was somewhat disappointing given the number of shots he had, Yandle just turned 25 and has already shown great leadership qualities.

6. Tobias Enstrom, Winnipeg Jets (11): Enstrom was paired with Byfuglien last season, giving the Thrashers the most dangerous defensive tandem in the league. Enstrom’s franchise record consecutive game streak of 296 was snapped last season thanks to a broken finger, but despite missing 10 games, he still managed to reach double digits in goals for the first time in his career. The -10 ranking hurt, but this Swedish defenceman still has upside, so don’t be shy about targeting him early when filling out your blueline corps.

7. Dan Boyle, San Jose Sharks (4): Boyle missed some time last season, but came back in mid-March just in time to help with the Sharks with their playoff push. With Brent Burns now on the Ducks, Boyle could be poised for a huge season. He slipped offensively last season, yet still recorded his third straight 50-point effort, and while it was annoying to see him fail to reach double digits in goals despite his massive shot total, the fact that he won’t be the only offensive threat on the Sharks’ blueline this season bodes well for a nice comeback.

8. Shea Weber, Nashville Predators (6): A finalist for the Norris Trophy last season, Weber has his contract issues this summer, but he finally re-signed with the Preds. Last season, he played in all 82 games for the first time and enjoyed a solid all-around season as the defensive lynchpin of the Nashville blueline.

9. Mark Streit, New York Islanders (8): Streit has slowly been declining in our rankings, slotting in at No. 6 in 2009-10, slipping to eight last season, and clinging to his place as a top 10 defenceman this year after missing the entire 2010-11 season with a shoulder injury. But he’s back this season, and ready to resume his role as the quarterback of the Islanders’ power play. We’d like to see Streit improve on his even plus/minus of two seasons ago, but that should be accomplished easily as the young Isles mature into a better club. First order of business: make it through training camp unscathed.

10. Brent Burns, San Jose Sharks (NR): The addition of Burns could be just the ticket for the Sharks to finally make it over the hump this season. Two seasons ago, he got off to a lousy start, forcing him on to the wire early, and wound up missing a huge chunk of the season. Last season, however, Burns stayed healthy and enjoyed his finest offensive campaign, and even managed to move his lousy plus/minus closer to even. We’re really excited about what Burns will be capable of in San Jose, where he is reunited with his former minor league coach, Todd McLellan.

11. Drew Doughty, Los Angeles Kings (2): Doughty ranked near the very top of this list last year, but things have gotten ugly between him and the Kings as they’ve failed to come to terms on a long-term contract even though they’ve been working at it for months. Doughty failed to report to psychical and fitness training at the Kings’ camp, and his absence is not ingratiating him to the team. This situation, combined with the fact that his scoring tumbled to just 40 points last season after getting 59 in his sophomore season, has caused Doughty to tumble out of the top 10. His PP production plummeted last season, and that really hurt his overall numbers. Still, once Doughty and the Kings resolve this contract squabble, he has the talent to help take this young team far into the playoffs.

12. Kris Letang, Pittsburgh Penguins (25): Letang barely cracked the top 25 last year, but this season, he’s knocking on the door of being a top 10 D-man. In fact, we’ve seen some rank him much higher than this, so if you grab him even earlier than this, we won’t quibble. Letang stayed healthy last season, breaking through for his first 50-point campaign, while posting a robust +15. He became a real quarterback on the power play, picking up 20 assists on the man advantage. Last season, Letang was one of only two defenceman in the league to get at least 30 points and 100 penalty minutes.

13. Christian Ehrhoff, Buffalo Sabres (24): Ehrhoff is another blueliner we had just inside the top 25 last year that is now making a run at the top 10. After two season with the Canucks, the last of which featured him putting up his first 50-point effort, Ehrhoff has moved to the Eastern Conference for the first time to play with the Sabres. The Canucks will have a big hole to fill with the loss of Ehrhoff as they look to head back to the Finals and finish the job they couldn’t quite accomplish last season. Buffalo, meanwhile, boosts its chances of being a top four seed in the East and getting past the first round with this addition.

14. Alex Goligoski, Dallas Stars (32): Goligoski has taken an even bigger leap in our rankings this year, shooting up from the top 35 to the top 15. And why not? Last season, he was enjoying a breakout season for the Pens, and kept the party going after being dealt to the Stars. He wound up +20 despite Dallas’ late-season collapse, and even started to rack up a few more PMs. Best of all, after landing on the Stars, Goligoski saw a massive boost in PT, and if that continues, he’ll provide Dallas with its first real offensive threat on the blueline since Sergei Zubov was racking up the points.

15. Ryan Whitney, Edmonton Oilers (NR): Whitney was having a huge season before blowing out a tendon in his foot and undergoing season-ending surgery. When healthy, he’s a consensus top 15 defenceman, but he’s been slowed in camp after hurting the foot last month. Before his injury, Whitney was racking up the assists and seeing healthy amounts of ice time. He’s been cleared for practice, but is still dealing with some pain. It shouldn’t be an issue for long, so don’t downgrade Whitney unless he has a setback in camp.

16. Alexander Edler, Vancouver Canucks (NR): Back surgery abbreviated what was shaping up as a career season for Edler, yet he still reached 25 assists for third straight season while matching his career best with five PPG. This season, with Ehrhoff gone, Edler has a chance to become a real monster for the Canucks.

17. Duncan Keith, Chicago Blackhawks (3): Keith was a top three blueliner heading into last season, but he failed to put up the kind of numbers many expected after his Norris Trophy showing in 2009-10. He slumped to 45 points and failed to reach double digits in goals despite a shot total that didn’t drop much. Don’t be shocked if he soars back into the top 10 by season’s end, as there still may be upside for Keith.

18. Chris Pronger, Philadelphia Flyers (7): A top 10 defenceman heading into last season, Pronger endured an injury-ravaged season that carried on into the offseason when he had back surgery. But he’s finally back skating now and is focused on avoiding the health woes from last season. Even though he missed over a third of last season, Pronger still managed a seventh straight 25-point season. You can expect his ice time to inch back up this season as the newly-minted Captain of the Flyers looks to erase a forgettable 2010-11 campaign.

19. James Wisniewski, Columbus Blue Jackets (NR): Wisniewski got off to a great start last season, making many a Fantasy owner grateful. His solid season continued even after dealt from the Isles to Montreal. And now he joins Columbus, instantly helping what should be a very dangerous power play this season. Wisniewski isn’t the most durable player, but he did reach 75 games for the first time last season and responded by reaching double digit goals for the first time. There are about three Blue Jacket blueliners that are vying for a spot on the top pairing with Wisniewski; whoever lands this job will be a serious sleeper, so pay attention to this position battle.

20. Erik Karlsson, Ottawa Senators (NR): Karlsson enjoyed a fine rookie effort in 2009-10, but he really blossomed offensively last season, racking up 45 points in 75 points. He was a dismal -30 on a crappy Senator team that placed two defenceman in the bottom five of this category, but he more than doubled his penalty minute total.

By RotoRob
This entry was posted on Sunday, September 18th, 2011 at 2:15 pm and is filed under 2011-12 RotoRob NHL Draft Kit, Cheat sheets, Chris Wassel, HOCKEY, RotoRob. You can follow any responses to this entry through the RSS 2.0 feed. You can skip to the end and leave a response. Pinging is currently not allowed.