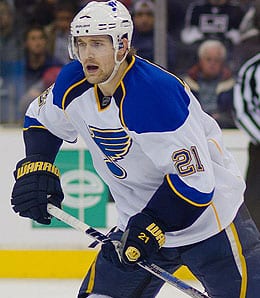 Patrik Berglund has turned his season around recently.

It is really the nicest feeling in the world for a fantasy hockey GM to know they are in the playoffs, but for those battling and clawing to get in, this can be a most unnerving experience. What do you think is the biggest key as far as winning in the playoffs? Well, digging for categories is the best way to go. Finding that magic scorer or goaltender is usually nearly impossible.

The other problem is injuries. More so than seemingly any previous season, injuries have wreaked such havoc on Fantasy teams in 2010-11. At press time, there were a whopping 130 injuries and 25 of those were head/concussion issues. When you figure that 15-to-20 per cent of NHL players are ailing in some way, some unconventional measures are in order.

This is why the playoffs this year are unlike any other. Honestly, we do not expect Sidney Crosby to be back for your Fantasy hockey playoffs. Crosby owners have been scrambling for the past 10 weeks or so and it has not been an easy ride, but if the storm has been weathered, then the time has come to turn the heat up because the playoffs bring that out.

When the schedule pans out for some, you have to look at New Jersey players because of the relatively easy schedule for March. However, the unconventional approach is looking at the teams like the New York Rangers and Buffalo Sabres. These are teams that play so much better on the road because their home marks are actually below .500 despite holding down the No. 7 and 8 seeds in the Eastern Conference race.

Then there is Pittsburgh, which actually has a tougher than expected week. The Senators and Oilers are better than their records indicate at the moment so using Penguins may not be all that prudent.

Even the New York Islanders have an interesting schedule, with games against the Rangers, Hurricanes and Panthers. Islander players may be worth a pickup because of the fact they play well against their rivals and a team that skates pretty well like the Isles can handle the pace of Carolina and Florida.

The San Jose Sharks got Dan Boyle back Saturday, so that’s an interesting piece of the puzzle to look at. There is a construct that often says the following: The top defenseman pairs well with the first line. More importantly, the second line has to have a solid chemistry with the third defenseman. San Jose has that ability which is their schedule is favourable.

Having said all that, what are some good pickups for this week? Like many have said, there are no such normal waiver wire pickups. The emphasis is to dig dig some more. How low do you have to go? With some teams cutting players because they are out of it, there may be a few players on the waiver wire to be had that could be considered a little surprising.

Are you ready? Well, it is time to go fishing and see what is out there for the Fantasy hockey GM.

Patrik Berglund, C, St. Louis Blues: Berglund was having a bit of a disappointing season and then all of a sudden, the points started to come. He has 14 points in his last 16 games to boost his season total to 45 points. But what has been key is the fact that he is shooting a bit more and he is starting to get a bit more physical. Berglund is the type of player that needs to play a bit physical to get results. His current ownership rate of 15-to 25 per cent (17 per cent in Yahoo! leagues) is way too low; it is high time to pick up a player like him.

Darren Helm, C, Detroit Red Wings: Helm is the type of player that really excels this time of year. Case in point: after scoring his 11th goal of the season Saturday, he now has six points in his last seven games and two multi-point games during this stretch. If you look at line pairings and the fact that Helm only has a 2 per cent ownership rate, he’s definitely a name to consider.

Jiri Hudler, LW, Detroit Red Wings: While we’re musing Motown, there is another guy that is averaging nearly a point a game in his last dozen and that is Hudler. He is on fire right now and he is only owned in 10-to-12 per cent of leagues (10 per cent in Yahoo! leagues). What that tells us is the usual suspects in Detroit are not the only ones that are scoring. Smile and look just under the surface to find more of these types of players out there.

Al Montoya, G, New York Islanders: We’ve been touting Montoyo for a little while now, but apparently not many owners have been listening as he is still only owned in a quarter of Yahoo! leagues, yet his GAA is right near 2.00 and he boasts a save percentage of .927. There’s a valuable lesson to be learned here. It definitely says something when a goalie can do this at a late stage in the season like what Montoya is doing. It tells you that the team plays well in front of him and that the goalie makes the saves. What makes Montoya attractive among the horde of goaltending options is that he plays the percentages well and he is getting a chance.

Now there is a little bit of time for some honourable mentions.

Blake Comeau, RW, New York Islanders: Comeau is on fire with five goals and an assist in the past six games including his first short-handed goal of the season in Saturday’s loss to New Jersey.

Curtis Glencross, LW, Calgary Flames: Glencross fired home two goals and two assists in a three-game span last week before getting shut out in his past two games. His PPG in a win over Columbus on March 4 was his career-best third of the season.

Cory Schneider, G, Vancouver Canucks: As Roberto Luongo’s understudy, Schneider obviously doesn’t see much action, but he’s looked great when in the nets. Thursday, he improved to 13-3-2 by stopping 44 shots by the Sharks. His 2.23 GAA is the best mark of his career — by far.

So, come one and come all. Good luck in all your Fantasy hockey playoffs and the crunch time that is coming. Look for our podcast on Sunday and Wednesday nights at 8 p.m. EST and all of our Fantasy picks and more.

You can also leave comments and suggestions here over the final few weeks of the Fantasy hockey season.

By Chris Wassel
This entry was posted on Sunday, March 13th, 2011 at 4:19 pm and is filed under Chris Wassel, HOCKEY, The Wire Troll. You can follow any responses to this entry through the RSS 2.0 feed. You can leave a response, or trackback from your own site.