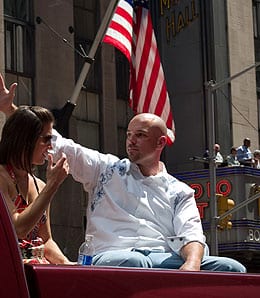 George Sherrill (right) hopes to be back with the Braves before the playoffs.

In this week’s column, we take a look at bullpen situations around the NL.

With an astonishing 19 consecutive saves dating back to when he returned from the disabled list on July 27, J.J. Putz is a big part of the reason the Diamondbacks lead the NL West, and his addition as a free agent has been just one of many astute moves GM Kevin Towers made. Despite a major meltdown on September 6, David Hernandez has bounced back with a hold and a win and remains a nice option in NL-only leagues and leagues that track holds.

Kris Medlen is making progress in his return from Tommy John surgery. He threw a 25-pitch bullpen session Saturday, and there’s a slim chance he could pitch out of the Braves’ bullpen in the playoffs. Medlen is still a long way from returning to the rotation, but the Braves don’t need help in that department right now anyways. Lefty George Sherrill is also on the comeback from an elbow injury. He tossed a bullpen session Friday and will throw again Sunday as he attempts to return before season’s end.

Francisco Cordero blew his last save chance on Thursday, and with his contract ending, Cincinnati could look elsewhere for a new closer for next year. Cordero had an All-Star worthy season and while the club does have a option on him next year, the Reds aren’t likely to exercise it. Aroldis Chapman could possibly take over for as the Reds’ closer in 2012, assuming the team doesn’t decide to make him a starter.

Rafael Betancourt still holds control over the starting closer position, however, his contract ends this year and he’s likely to wind up on a new team. Huston Street had a good year before his injury in August; he’s pitched well in a set-up role since his return and will likely regain the closer job next year. In regards to Fantasy options the rest of this year, both Street and Rex Brothers can be used for holds. Looking long-tern, Brothers has shown closer potential, so consider him a sleeper for 2012.

Jonathan Broxton’s contract ends this year, and his season took another turn for the worse as he’ll go under the knife Monday to reduce a spur on his right (pitching) elbow and remove chips. It’s a rather ugly way for him to end his Dodger career, but it’s highly doubtful he’ll don the uniform again even though he says he’s like to stay in LA. Javy Guerra, who has nailed down 18 saves in 19 tries with a 2.11 ERA, sue looks like a nice bet to be earning saves again next year.

John Axford tossed a scoreless inning Friday for his 43rd save of the season, third most in the majors, while lowering his ERA to 2.07. After setting these career bests only in his second full year in the majors, there’s no reason to believe Axford won’t be a top five closer next season as well. And as if his stellar season hasn’t already guaranteed some job security, the fact that both LaTroy Hawkins and Francisco Rodriguez will be free agents only solidifies his hold on the gig. K-Rod, who has been moaning about his lack of save chances, does have an option on his contract, but it won’t kick in because he won’t reach 55 games finished. Still, Rodriguez’s arrival in Milwaukee allowed the Brewers to really strengthen their bullpen by putting Hawkins and Kameron Loe in specific roles.

It seems like once a pitcher earns the closer job for the Mets they blow it up. Jason Isringhausen who first took over once K-Rod was dealt, is now looming as the fourth listed closer. One of just three active 300-save men, we know Izzy is capable of nailing down wins. Bobby Parnell was the most recent to claim the job, however, he has three blown saves this month. Even backup Manny Acosta has two blown saves in three attempts this month. On Thursday, he was absolutely ripped by the Nationals. ‘Nuff said. I would expect the Mets to go shopping for a top closer in free agency, but it’s worth noting that former Met closer John Franco is working with Parnell on the mental aspects of closing. It’s obvious Parnell has the arm to close; it’s his head that need an adjustment.

Ryan Madson continues to shine and hasn’t allowed a run since taking a career-worst bitch slapping on August 19. Both Madson and Brad Lidge will be free agents at the end of the year, although the Phils do have an option on Lidge. Given their worries about luxury tax, Lidge is probably done in Philly. The Phillies could re-sign Madson or explore free agency for a top closer to add to their playoff caliber team. Of course, they could also opt to hand the job to Antonio Bastardo, who sure looked lights out this season. Veteran minor leaguer Juan Perez pitched well in his brief time with the Phillies in July, his first major league action in four years. His reward? Getting outrighted to Triple-A to clear space on the 40-man roster. The same fate befell Mike Zagurski, who had better bottom line results, but allowed too many baserunners in his very brief time in Philly this year.

Thanks to some ugly glovework behind him, Jason Motte blew his first save chance on Friday since taking over the closer role, and Fernando Salas came on to record his 24th save of the season. Still, St. Louis loves what it’s seen from Motte, who will enter 2012 as the favourite to earn saves. Motte could still be available in some shallow mixed leagues, so grab him if you need relief help. Minor leaguer Francisco Samuel, who suffered through an injury-shortened season, was outrighted to Triple-A, thereby removing him from the 40-man roster. He once looked like a closer of the future, but injuries and ongoing wildness have steered him off course.

Heath Bell becomes a free agent this fall and will be one of the top closers signed most likely after Jonathan Papelbon gets a deal. Bell is just two saves shy of becoming the only pitcher in baseball to record 40 saves in each of the past three seasons, as RotoRob reported earlier this week. He’s tossed two straight hitless outings and has now given up just 48 hits in 58 2/3 IP, which is not quite as nasty as he was last year, but is pretty damned good. The Padres have an option on Chad Qualls next year that they could exercise if they opt to give him the closer job next year, assuming they don’t re-sign Bell or go with Luke Gregerson. With his hitless outing Friday, Qualls now has less hits allowed than innings pitched, a nice comeback after his nightmare 2010 season.

The Giants continue to struggle with their injury issues, with Brian Wilson remaining on the DL. He has been eligible to return, but he is still not healthy enough to return. The Bearded One probably needs one more mound session before being activated. With Wilson out, the closer committee is Santiago Casilla, Ramon Ramirez, and Sergio Romo. All are getting playtime, but Casilla is getting the most save chances between the three. Casilla earned his fourth save Friday when he threw a shutout frame and fanned two, giving him 42 Ks in 47 1/3; not as dominant as he was last year, but he’s allowed fewer runners this season. Ramirez gave up a couple of hits Monday, but has been flawless in his two appearances since to trim his ERA to 2.86. Romo has been crazy good all year and has set himself up for a nice raise in arbitration this winter.

By Trevor Blake
This entry was posted on Saturday, September 17th, 2011 at 3:56 pm and is filed under BASEBALL, Saving Grace, Trevor Blake. You can follow any responses to this entry through the RSS 2.0 feed. You can skip to the end and leave a response. Pinging is currently not allowed.