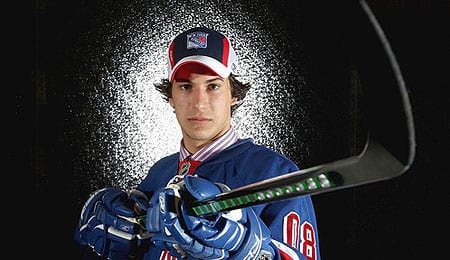 If you stood pat with your team, you might have missed out on early-season waiver wire gems like Michael Del Zotto.

This week we asked the Roundtable “Who is your earliest pick that you have already dropped from your Fantasy roster?” Because, honestly, I was feeling a little guilty about some recent moves.

I subscribe to the philosophy that the Fantasy hockey season is a marathon, not a sprint, so I don’t get too concerned about statistics from the first two weeks. By sticking to that philosophy, I know that I have now officially missed the boat on early-season waiver wire gems like Michael Del Zotto. But at the same time, I am patient to wait it out with players struggling early on like Roberto Luongo, Ryan Getzlaf and Pavel Datsyuk, meaning that I don’t even consider trade offers for those players from other owners looking for a buy-low opportunity.

Being patient over the first month means that the earliest pick that I have already dropped is likely a later pick than most of the other guys. But that pick is Filip Kuba, picked 159th overall in the Yahoo! Experts League. Kuba has been sidelined day-to-day for the past couple weeks, and the Senators have not placed him on IR even though there is no targeted return date. My defense on that team needs a significant upgrade, so I can’t afford to wait it out with Kuba any longer. Other players that I have dropped from other teams include Pierre-Marc Bouchard, Bryan Little, Johnny Oduya, Matt Niskanen and James Wisniewski, all for various reasons.

The NHL season is only three weeks old and many GMs panic and drop their early/mid round picks for the streaky FA. I tend to be very cautious when it comes to dropping players on my roster that are off to slow starts. However, I’m usually very active in rotating my last starting D in leagues that include four or more starting D.

My first drop was Brent Burns, two and a half weeks into the season. Since then I have rotated the spot with Marc-Andre Bergeron and Jason Demers. I will continue to cycle this position unless Burns becomes a valuable Fantasy asset again.

I tend to be cautious about panicking too early in the season (see my recent article here on the annual early-season panic). However, I have just recently dropped Brent Burns, who I had hoped was going to have a solid year (still possible), but obviously something is not right in Minny (maybe the new coaching style), but I just couldn’t live with a league worst -10.

I have also dropped Loui Eriksson at LW, not because he has had slow start (he’s doing pretty much what most folks thought he was going to do), but more as a reflection of some interesting opportunities at LW that became available in my league (like Patrick O’Sullivan, who I highly recommend as a LW2 or 3 if you can still pick him up off the wire).

I haven’t had any big let downs yet this year, and plus I think it’s a little early to be dropping guys that have proven themselves in years past. There’s no reason to drop any player that’s healthy if drafted in the top six or eight rounds at this point, but injuries are another story.

I highly recommend keeping an eye on the transaction history of your league on a daily basis to make sure that you can capitalize on other owners mistakes, like dropping Savard.

And as for yours truly?

I dumped Christopher Higgins, who’s been struggling for the Rangers. He’s got no goals and just two points and seems to be losing confidence by the day. But even more damaging, his coach, John Tortorella, seems to have lost confidence in him. And it seems like Higgins will be relegated to the bench in a manner of days. You picked him because you thought he would finally hit that 30-goal plateau, especially playing on a line with Chris Drury and Ryan Callahan. Now, it looks like he’ll be lucky to pick up 10 goals this year.

By Steven Ovadia
This entry was posted on Saturday, October 24th, 2009 at 3:00 pm and is filed under HOCKEY, Roundtable, Steven Ovadia. You can follow any responses to this entry through the RSS 2.0 feed. You can skip to the end and leave a response. Pinging is currently not allowed.