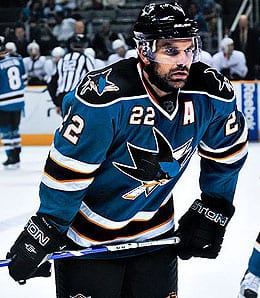 Dan Boyle is consistently one of the best defenseman in the game.

We’ve taken a bit of a break, but we’re back to push out the remainder of the 2010-11 RotoRob NHL Draft Kit. So while we wonder how the New Jersey Devils are going to get themselves under the salary cap, let’s examine our picks for the top defenseman in Fantasy hockey.

This year’s class of defensemen is more balanced than most. Some will say that it is not, but honestly there is Mike Green and then there is everyone else. Green is a defenseman in theory only. He piles up lots of points for Fantasy owners and accumulates a nice +/-. However there are still some very nice options out there. Listed below are our 25 best and a few more to consider. Good luck this year and hopefully our list helps you in your quest to find quality defensemen. Now, our rankings, which will likely generate some controversy.

1. Mike Green, Washington Capitals (1): Green’s goals did drop off, but he did have 57 assists and ten PPGs which is something important to keep an eye on. Yes, his play in his own zone is questionable, but with that Washington offense, this two-time Norris Trophy candidate should be the first defenseman taken off any board.

2. Drew Doughty, Los Angeles Kings (NR): I have to be honest and say that I expect Doughty to stay at about the same level of production this season as he did in 2009-10. That will disappoint some owners who see him going nutso again. I do not, but at the same time, his production should make fans content. Around 35-to-40 points on the man advantage should do the trick, but will Doughty be the NHL’s best defenseman before he turns 21? We have our doubts.

3. Duncan Keith, Chicago Blackhawks (26): Keith exceeded all expectations in 2009-10, potentially bombing out with 69 points. There are concerns that the three PPGs is pretty darned low, but he produces assists and a nice plus/minus and that’s attractive to Fantasy owners. One interesting point to consider is that Keith may benefit from having Marty Turco in net, as Turco excels at handling the puck which will lead to a better transition game for the Hawks. As we mentioned, this list will generate controversy as to where we have some ranked.

4. Dan Boyle, San Jose Sharks (4): Boyle is very consistent on a game-to-game basis. He recorded 57 points two seasons ago and put up 58 in ’09-10. That should give you a pretty good idea of what he will do this year. That type of consistency is rare in Fantasy leagues for defensemen, especially keepers. Boyle’s ability to produce in the clutch makes him a top five defenseman in our books.

5. Nicklas Lidstrom, Detroit Red Wings (3): You know what you’re getting with Mr. Lidstrom. Even in an off-season, he had 49 points in ’09-10. Expect 50 or more points this season and another potential Norris nod. If this is Lidstrom’s final season, expect the Wings’ captain to go out in a blaze of glory especially with an improved team on the man advantage.

6. Shea Weber, Nashville Predators (14): I like Weber as a player and I expect solid contributions from the Predators’ captain this season, although it would be nice to see him record a higher +/- (his best figure over the past three seasons is just +1). As a bonus, he’s in the final year of his contract, so is quite motivated to have a big season.

7. Chris Pronger, Philadelphia Flyers (9): Pronger is in a nice setup. He can rack up assists and good PIM totals in Philly which makes him a great investment for Fantasy owners over at least the next two or three seasons. Pronger may go earlier in drafts just on name recognition, but he’ll definitely bring a solid return on investment. He’s coming off right knee surgery and that will hold him out of practice in the early going, but this is not expected to be an issue.

8. Mark Streit, New York Islanders (6): The Islanders should be better team this season, and that will help especially in +/-, but they are still a team where scoring is at a premium. In fact, Streit could come to leading the team in scoring again after finishing just five points behind John Tavares last season. The Isles were one of the worst defensive teams in the NHL last season, but veteran Streit should help them improve.

9. Zdeno Chara, Boston Bruins (10): The lack of scoring depth on Boston hurts Chara, but it’s understood that he had a down season and his plus/minus and PIMs are usually very easy to take on most Fantasy teams. If you count hits and blocked shots in your league, that is an added bonus. He’s reportedly looking very good in training camp, so expect a bit of an uptick this season and maybe even a career high in points.

10. Tomas Kaberle, Toronto Maple Leafs (19): Last season, Kaberle seemed almost unhappy in Toronto for the first time. It may not have been said publicly, but it was there. I just seem to think he’ll get traded (almost certainly to a better team) and cranks out a 55-point season somewhere else or else he’ll be traded at the deadline and get hot. The Blue Jackets, for one, have already tried to land him. Either way, Kaberle will do better than last season and really he should be on your Fantasy radar.

11. Tobias Enstrom, Atlanta Thrashers (30): This is one of our first real “reaches” in a sense. But Enstrom is on a better Thrasher team that has more depth this season (the addition of Dustin Byfuglien was especially huge, no pun intended), and we expect him to mature. We like the way he plays even if his two-way game is not all the way there yet. The Thrashers’ coaching staff has improved and we feel Enstrom’s 50-point season was not a fluke. He may even improve slightly which may mean a few more PPGs and those are always nice.

12. Andrei Markov, Montreal Canadiens (5): Markov’s shot clearly got better until a late-season knee injury. The Habs will be better off this season with a healthy Markov from the beginning (if he’s ready by then, which is in doubt after he spent most of the summer rehabbing from surgery). If he stays healthy, he could top 60 points and rack up some nice numbers on the man advantage. That is a place Fantasy owners always like to go looking for bonus ways to take advantage of the competition.

13. Dion Phaneuf, Toronto Maple Leafs (12): He cannot be any worse than last year…really! Once he arrived in Toronto, Phaneuf made those around him better and he was rewarded (or should that be cursed) with the “C” as a result.

14. Sergei Gonchar, Ottawa Senators (2): Gonchar may be a bit old, but he will still produce some points. We’re talking about a blueliner that has managed to record at least 0.75 points per game for the past nine seasons.

15. Tyler Myers, Buffalo Sabres (NR): You need to be watch out for a sophomore slump from Myers, but last season was no fluke, so you can probably expect about the same, Fantasy owners. However, do keep in mind that this is a 20-year-old kid we’re talking about here.

16. Erik Johnson, St. Louis Blues (NR): We’re expecting a nice spike in production this season for this talented d-man, who at the age of 22 is already one of the Blues’ alternate captains.

17. Brian Campbell, Chicago Blackhawks (8): The veteran missed time with a shoulder injury courtesy of an Alex Ovechkin hit last season, but he still had the second best +/- mark of his career while logging more ice time. His bloated contract is a problem for the Hawks, but Campbell remains superb at lugging the puck out of the zone quickly.

18. Andy Greene, New Jersey Devils NR): Another year means more maturity, so do not sleep on Greene. If he gets the minutes, he will get the points. Greene opened some eyes last season; hence his inclusion in our Top 20. This season, he may become a household name.

19. Marek Zidlicky, Minnesota Wild (18): Minnesota should be better this season, and that’s good news for Zidlicky and his Fantasy owners. He’s currently day-to-day with a leg injury, but this is not cause for concern for this underrated performer.

20. Stephane Robidas, Dallas Stars (NR): Robidas offers steady production on an unstable Dallas team. He’s coming off shoulder and hip operations, but he remains a solid mid- to late-round choice as the only Dallas D-Man worth drafting.

21. Brian Rafalski, Detroit Red Wings (7): Rafalski’s numbers dipped last season, but he had a better +/- and pitched in with a few PPGs. Last season marked the first time that the Michigan native didn’t manage at least 55 points since he joined the Wings and given that he turns 37 next week, his days as a top 10 defenseman are likely over.

22. Joni Pitkanen, Carolina Hurricanes (NR): Pitkanen broke through for his first 40-assist campaign last season, but his +/- suffered on a crappy Carolina team. Still, the veteran played well down the stretch, scoring 11 points with a +6 ranking in 16 March games.

23. Lubomir Visnovsky, Anaheim Ducks (NR): Assuming Scott Niedermayer remains retired this time, Visnovsky is the only offensive blueliner hope in Anaheim and someone in Duck-land has to get points among the defense corps, right?

24. Christian Ehrhoff, Vancouver Canucks (NR): Increased blueline depth in Vancouver means the minutes will be spread around, but the Canucks’ power play quarterback should produce once again. Whether he can build on his career season, however, remains to be seen.

25. Kris Letang, Pittsburgh Penguins (23): Letang will get more points with Gonchar gone and he has a good chance of being on the Penguins’ top power play unit this season, which would provide a big boost, considering he did very little on the PP last season. Thankfully, Pittsburgh added Paul Martin and that should help take some of the pressure off Letang.

26. Kimmo Timonen, Philadelphia Flyers (20)
27. Paul Martin, Pittsburgh Penguins (NR): Martin would be higher if not for questions of durability, but he’ll get more PP time with a better team this season. He’s not a huge impact player, but is big enough to be a top 30 D-Man.
28. Keith Yandle, Phoenix Coyotes (NR)
29. Ryan Suter, Nashville Predators (24)
30. Jack Johnson, Los Angeles Kings (NR)
31. Bryan McCabe, Florida Panthers (22)
32. Alex Goligoski, Pittsburgh Penguins (NR)
33. Pavel Kubina, Tampa Bay Lightning (NR): He could really benefit from playing in Tampa Bay again.
34. John-Michael Liles, Colorado Avalanche (NR): We think he eventually will be traded to a better team where he can produce.
35. Jay Bouwmeester, Calgary Flames (13): The mighty fall hard, but there are tons of questions in Calgary.
36. Filip Kuba, Ottawa Senators (NR): Healthy now, he is a much better player, so expect 40 points, 30 of them on the PP.
37. Zach Bogosian, Atlanta Thrashers (NR): He is going to really surprise this season and may even break out.
38. Ian White, Calgary Flames (NR): He’s not the Phaneuf of days gone by, but is still a Fantasy producer for the Flames.
39. Michael Del Zotto, New York Rangers (NR)

By RotoRob
This entry was posted on Tuesday, September 21st, 2010 at 12:18 pm and is filed under 2010-11 RotoRob NHL Draft Kit, Cheat sheets, Chris Wassel, HOCKEY, Mike Chen, RotoRob. You can follow any responses to this entry through the RSS 2.0 feed. You can leave a response, or trackback from your own site.