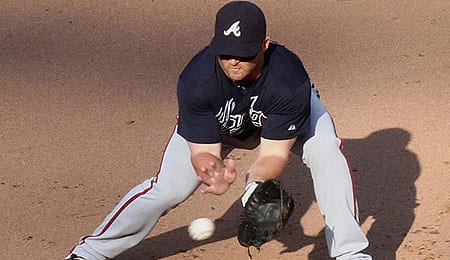 Dan Uggla is still hitting 30 points below his weight.

The Atlanta Braves have been spinning their wheels lately and have now fallen five games back of the first place Phillies in the NL East and are just 3.5 games ahead of the surging Nationals. More importantly, their grip on the NL Wild Card slot has slipped to a half a game with the Giants turning things around with three straight wins.

Dan Uggla? That big right-handed power bat the Braves thought they were adding to the middle of their lineup? Apparently, he purchased Nate McLouth’s DVD, How to Become an Atlanta Brave and Completely Forget How to Play Baseball.

We identified Uggla’s sluggish start very early in the season, but it’s honestly hard to believe that over two months later, we’re still waiting for the real Dan Uggla to show up.

He took an 0-for-3 Friday, committing an error and whiffing twice to drop back to .175, or about 30 points below his weight. After Uggla’s only three-hit game of the season on May 4, he reached a high water mark of .218. Pretty sad, huh?

Uggla is still hitting for power (he spanked his 10th dinger on Thursday), although not quite up to his usual standards. He’ll need a very big second half if he has any chance of reaching 30 homers for the fifth straight season.

Some people are uttering the name Rob Deer when discussing Uggla’s 2011 season. I think that’s grossly unfair, at least so far. But you do have to wonder how much longer the Braves will stick with Uggla before letting him ride the pine for a while.

Other than his rookie season and last year, Uggla has never really hit for much average, but what we’re seeing this year is just ridiculous. Some fans have even suggested that he should be sent to Triple-A, but you don’t generally demote players that you have a $62-million investment in.

By RotoRob
This entry was posted on Saturday, June 25th, 2011 at 2:19 pm and is filed under BASEBALL, MLB Today, RotoRob. You can follow any responses to this entry through the RSS 2.0 feed. You can leave a response, or trackback from your own site.