Random Thoughts on a Mid-May Day 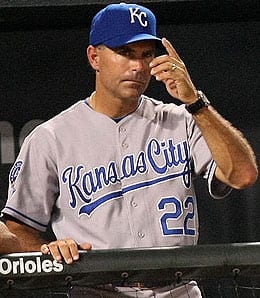 Didn’t Trey Hillman realize the answer to his problems was right upstairs?

So Trey Hillman is the first manager of the season to face a firing squad. Hard to quibble with this given that the Royals are below the punchless Indians, for freak’s sake. A scary thought: George Brett, who celebrates his 57th birthday today (Friday) would probably still be the third best hitter on the team. Perhaps if Hillman had coaxed the vice president of baseball operations out of retirement he would still have a job. Or failing that, he’d at least have gone out in a blaze of glory.

With 18 whiffs in his past 10 games, David Wright is up to 46 strikeouts through 35 games, a pace that would see him go down swinging 213 times. For reference, that’s just 10 shy of Mark Reynolds’ MLB record, set last season. Last season, Wright shattered his previous career high by fanning 140 times, but the way things are going this year, that figure is going to look pretty damn good by season’s end.

Sure, the Astros just walked into St. Louis and swept the Cardinals to pull within a game of crawling out of the NL Central cellar, but let’s get real: it’s just a matter of time before Lance Berkman, the last remaining Killer B in Houston, is dealt to a contender. He’s already said he’d be willing to waive his no-trade clause, so now it’s just a matter of finding the right match for the Astros. Roy Oswalt is as good as gone, as well.

On this day in 1993, the Montreal Expos retired their first jersey, honouring the No. 10 worn by Rusty Staub. Now that Rusty Greer’s been out of the game for several years and Rusty Meacham went to Indy ball before retiring four years ago, that leaves Rusty Ryal as the only current Rusty in the bigs. We need more Rustys, don’t you think? At any rate, Ryal’s pinch-hitting penchant (.393 BA) off the D-Back bench should ensure he’ll stick around at least through the 2010 season. It will be a sad day when I’m left without a Rusty to root for.

What’s wrong with Tim Lincecum lately? He’s recorded three straight no-decisions, and clearly, it’s all his fault: in 21 1/3 IP, he’s given up 15 hits, seven runs, two homers and four walks while striking out only 32. Uh…yeah. Me thinks that Saturday’s start at home against the NL’s worst offense (Houston) is just what Lincecum needs to get back into the win column.

On April 24, Hideki Matsui was batting .310 and making us look smart for picking him as a good last round flier. Well, he’s 6-for-52 since dropping to .226 and there are no injuries (reported, at any rate) to blame it on. Godzilla is only striking fear in his Fantasy owners these days as he’s managed just 10 runs through 35 games, and is finding himself on the bench on occasion as a result. Matsui is winding up on plenty of wires, and that’s a trend that may continue as June tends to be his worst month in recent years. July, however, has been very kind to him, so if you find yourself needing a bat about five weeks from now and Matsui is out there, he might be worth taking a chance on.

Fair is fair. We slagged Kevin Kouzmanoff for his declining batting average in recent seasons when ranking him as the 16th-best third baseman heading into the season. Well, he was definitely heading in that direction again, batting as low as .210 as of April 21, but he’s turned it around since then. In the last 10 games, he’s batting .333 to take his average over .270. It’s nothing worth getting wet over, but bear in mind that his personal best is .275, so this is breaking news. Unfortunately, I doubt it’s sustainable. Check out his batting eye: in 34 games, Kouz has walked five times while whiffing 25 times. Worse yet, his power – really the only reason you want him – continues to decline. In fact, his isolated power numbers have dropped every season he’s been in the bigs and this year’s .360 slugging is downright unacceptable. If I owned Kouzmanoff, I’d talk up his recent BA hot streak and sell his ass to anyone willing to take him. At this point, he’s a backup third baseman at best in a standard, mixed league. Even in an AL-only league, he’s a fringe starter.

Michael Cuddyer is slumping, a 4-for-28 skid in the past week and change dropping him from .309 to .275. Of bigger concern is his long-term prospect as a power hitter. After clouting a career-best 32 dingers last season, Cuddyer has just five this year. And while they are all at home, the early returns suggest that Target Field plays big, which is a troublesome trend for a flyball hitter like Cuddyer. I might try to move him as soon as he strings together a few good games.

Perhaps Mike Sweeney should concentrate more on hitting baseballs (he’s currently batting .189) than hitting his own teammates as he threatened to do to the two unnamed Mariners who exposed Ken Griffey Jr.’s now legendary nap to a reporter. Just saying…

Remember when Pat Burrell was a useful Fantasy player? If so, your memory is better than ours. Seriously though, have you ever seen a steeper decline? Since Burrell left Philly, he’s gone from bad to rancid. He’s losing PT to Willy Aybar, he of the 30 career homers. Burrell has hit at least that many dingers in a season four times, yet he can’t wrestle the DH spot away from Aybar. Yes, that’s lame.

By RotoRob
This entry was posted on Friday, May 14th, 2010 at 3:21 pm and is filed under BASEBALL, RotoRob. You can follow any responses to this entry through the RSS 2.0 feed. You can leave a response, or trackback from your own site.