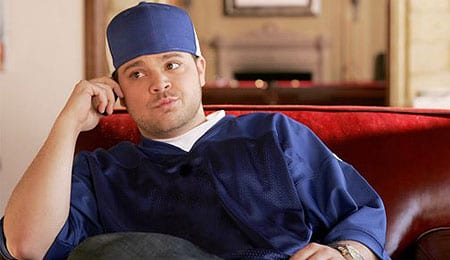 Turtle was turned down by Ryan Howard for tequila funding. Did the Entourage star curse RyHo?

It took Chris Carpenter until May 10 to bag his first win of the 2011 season. Over six weeks later, on Thursday he earned his second win by beating the Phillies.

It’s pretty obvious that at this rate he won’t be matching the 16 wins he put up last season, will he?

Lack of run support has been a real factor here, but for a pitcher we expected to be just outside of the top 20 starters in baseball, Carpenter has been a huge disappointment so far this season, as he hasn’t even cracked the top 100.

Carpenter had given up at least five runs in each of his two previous starts before Thursday’s seven-inning, one-run effort – just the second time all season he’s given up less than two runs in a start.

But there’s a more disconcerted trend here: in his last two starts, Carpenter has thrown 124 pitches each time out – the most pitches in a game in almost 10 years for the oft-injured righty.

Does St. Louis Manager Tony LaRussa believe that the 36-year-Carpenter is suddenly invincible? It’s a situation I would worry about greatly if I owned Carpenter, as this could very well have an effect on his subsequent starts. Watch his velocity and control over the next couple of starts.

By the way, that was the Cardinals’ first victory since Albert Pujols went down and the fact that they racked up some serious offense – 12 runs and 14 hits – was a promising sign.

The Phillies blew their chance to earn a sweep, and finished their six-game road trip at a pedestrian 3-3 as the Braves have pulled within four games of the NL East leaders.

Philly’s offense again went into the tank, but Ryan Howard continued his RBI tear with a two-out, run-scoring single in the sixth that got the Phils on the board. He’s driven in runs in 10 of the last 13 games and is up to 20 RBI for June to pull within one of Prince Fielder for the NL lead for the season.

We expected RyHo to be among the top five first basemen this season, but he’s barely been a top 10 player at his position thanks to a BA that’s slipped, and lower than expected run numbers (courtesy of a weaker than anticipated Phillie attack).

The reason why Howard’s numbers are down this season? Isn’t it obvious? It’s because he refused to invest in Turtle’s tequila company on Entourage. That’s some bad karma, dude.

Still, Howard has remained healthy so far this season, and we all know that he is a superb second-half player, so if you’re seeking a slightly buy low opportunity on a slugger, this is it.

One hurler that’s outperformed our expectations is Arizona’s Daniel Hudson. We projected him to be just outside the top 50 among SPs, but the way he’s pitching so far – despite an awful start to the season – Hudson has been a top 25 pitcher.

On Thursday, he wasn’t exactly overpowering (just one K in seven innings), but he held the Royals in check on six hits, one walk and three runs to win his third straight start, earn his sixth straight win and bag his ninth victory of the season, tied for tops in the senior circuit.

Remember that crappy start I alluded to? Hudson dropped each of his first four starts of the season. In his last 11 starts, however, he’s 8-1 with a sparkling 2.78 ERA. And the fact that he could earn a win and throw a quality start despite having shaky command on Thursday is a very promising sign, indeed.

Meanwhile, the D-Backs are looking like the best team in baseball away from home these days. Thursday’s win wrapped up a sweep in KC and gave the Snakes their 15th win in the past 19 road games. What a turnaround for a club that only won five times through its first 18 games away from home. Arizona, first in the NL West, has now opened up a four-game lead on the third-place Rockies.

By RotoRob
This entry was posted on Friday, June 24th, 2011 at 12:36 pm and is filed under BASEBALL, MLB Today, RotoRob. You can follow any responses to this entry through the RSS 2.0 feed. You can skip to the end and leave a response. Pinging is currently not allowed.