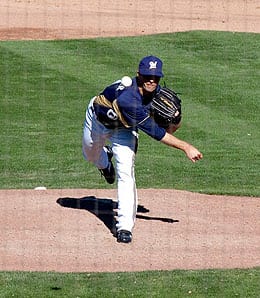 Toronto got hammered again in Boston on Monday (and not in a good way) as Jose Bautista managed just one hit in four tries, running his current chilly streak to 5-for-24 with one homer, four RBI, two runs and one steal over the past week.

Of greater interest, he’s walked just twice in that span after drawing a whopping 10 walks in the first six games of the season. Clearly, pitchers are not being as careful with Bautista as they were to begin the campaign.

Bautista, who missed a few games earlier this season because of the birth of his child (don’t you just love that as a Fantasy owner? It’s called a calendar; look into it), has become a real leader on this Toronto squad, although he hasn’t quite lived up to our pre-season billing as a top 20 outfielder.

Along those same lines, Bautista has only played the outfield this year, so it’s looking very much like he won’t qualify at third base any longer after this season. That’s got to be a consideration as a keeper league owner, so if you own him and are set at third base beyond Bautista, you may want to move him (once he heats up, of course) to a team that needs short-term third base help. It’s something to think about, at any rate.

Depending on your league rules, Kevin Youkilis has recently qualified or is about to qualify at third base (14 games), something that will give him a nice boost in value. Hey, at least something will increase his value, right?

Like many of the Red Sox, Youk got off to an extremely sluggish start, but he’s turning it on now. He doubled and homered on Monday, driving in two runs and giving him hits in seven of his last eight games. Hey, Youkilis is back over the Mendoza Line!

What I’m finding most encouraging is the fact that the extra-base hits are starting to come with greater frequency. In the four-game set against the Jays, Youk had two dingers and two doubles. I’d say the buy-low window for Youkilis is about to slam shut, so if you’ve been considering making a run at him, do it very quickly.

Milwaukee Brewers reliever Brandon Kintzler is miles from having any Fantasy value, but he’s looked better in each of his outings, and Monday he tossed two shutout innings for his first major league victory. He’s probably only going to stick around until LaTroy Hawkins is activated over the next day or two, but Kintzler has proved he can close in the minors, and John Axford was a nobody at this time last year, wasn’t he? Just sayin’…

Speaking of Axford, he suffered his second blown save in five tries thanks to Pete Orr’s pinch-hit RBI single in the ninth inning on Monday. Orr only earned a spot on the Opening Day roster thanks to Chase Utley’s injury, but all this Canadian veteran has done so far is bat .455. If Wilson Valdez wasn’t off to such a fine start as Utley’s early-season replacement, Orr would be seeing more PT, and given his strong spring (nine extra-base hits), I’d be interested to see what he could do. The 31-year-old was a useful bench player in Atlanta for a couple of years, but he has never seen more than 154 at-bats in any one big league season, and it’s not likely to happen this season, either. Still, his 6-for-11 start deserves a mention because otherwise we’d never have a chance to utter his name.

Heading into the season, we projected budding Pirate star Andrew McCutchen as a top 10 outfielder, but he’s barely been a top 30 player at his position so far. He missed one game with a stiff neck in the opening week, is hitting just .246 and has struggled on the basepaths (just 1-for-4 in stolen base attempts). Yet, positive signs abound: his power continues to develop; despite his lacklustre average, he’s been quite productive (he hit a two-run double Monday, and had three hits, two RBI and a homer on Sunday); and his batting eye just keeps getting better, and that tells me the BA will follow.

Really, the key here is McCutchen has just been unlucky. He has a career .315 BABIP, but it’s just .256 so far this season. McCutchen owners, don’t worry – your dude’s batting average will rise very soon. Yes, was he was struggling before Sunday’s action (1-for-14 skid), but is awakening now. If there is any opportunity for you to pry him away from an owner that’s frustrated by his sub-.250 BA, do it and do it now. McCutchen is a superstar waiting to happen, and we believe that’s going to come to fruition by the end of this season.

In his current role he has virtually zero value, but I will be watching to see if Matt Maloney gets a chance to start for the Reds at all this season. Notwithstanding one very, very ugly outing, he’s fared quite well as a long reliever/mop up man so far this season, and the Reds’ rotation – considered a strength heading into the season – doesn’t look as solid as most expected.

Johnny Cueto and Homer Bailey are still hurting, Edinson Volquez has just one quality start in four tries, Travis Wood has been roughed up in half of his starts and Mike Leake apparently can’t afford to buy his own shirts.

Enter Maloney, who caught our eye when he first arrived in the bigs a couple of years ago, and looked very good in limited action last season.

On Friday night, Maloney bailed out the Reds’ bullpen by throwing four scoreless frames in a 6-1 loss and in Monday’s 9-3 loss, he only gave up one run over three pretty tidy innings of work. The 27-year-old southpaw has pitched very well in the Triple-A Louisville rotation for the past couple of years, displaying phenomenal command. Personally, I’d be very interested to see what Maloney could do with a run of 10 MLB starts or so.

By RotoRob
This entry was posted on Tuesday, April 19th, 2011 at 1:06 pm and is filed under BASEBALL, MLB Today, RotoRob. You can follow any responses to this entry through the RSS 2.0 feed. You can leave a response, or trackback from your own site.