The Wire Troll: Brian Gordon Gets a Shot 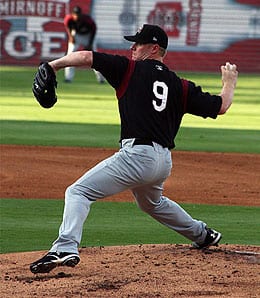 Brian Gordon will remain in the Yankee rotation for now.

Tim is off to a specialized fracture clinic (which hopefully doesn’t specialize in fracturing his head wide open) this week, so the Wire Troll once again is left to my care. So let’s rock…

Brian Gordon, SP, New York Yankees: Gordon is a converted outfielder that we’ve been hoping would get an extended look in the majors for a few years now. He did make his big league debut in 2008 with a few relief appearances – and fared well – but hadn’t been back until the Yankees signed him about a week and a half ago. Gordon’s been middling in his two starts so far, but he’s likely to maintain a rotation spot until Bartolo Colon or Phi Hughes returns. It’s worth noting that Gordon’s next start could be skipped, but if you are beating the bushes for starting pitching for your AL-only league team, keep him in mind as the veteran minor leaguer was filthy good at Triple-A before opting out to sign with the Yanks.

Desmond Jennings, OF, Tampa Bay Rays: In last week’s Podcast we talked about how Jennings was one of the few prospects still awaiting a promotion. Well, we’re still waiting, but sharp owners will strike now and stash the talented Ray flyhawk. There’s talk that B.J. Upton, who will be a free agent after the season, could be dealt, which would open up centrefield for Jennings. Meanwhile, Jennings continues to rake at Triple-A, going 3-for-5 Saturday to push his June BA well over .300. For the season, he’s batting .280 with 54 runs, a somewhat surprising 10 homers and an 831 OPS in 72 games. Jennings has only stolen 14 bases (a disappointment after he combined for 89 the past two seasons), but he’s picked up the pace with five so far this month and has only been caught once all season.

Jon Jay, OF, St. Louis Cardinals: Jay was someone we talked about a few weeks ago on the Podcast, suggesting he could be falling through the cracks for Fantasy purposes. And while Jay has cooled the past week, he did manage a couple of hits and a run on Saturday, but more importantly he’s getting the majority of the action in right field in St. Louis these days, which makes him worth an add. Remember that this is a dude that hit .397 in May and is capable of providing a sprinkling of homers and steals.

Josh Spence, RP, San Diego Padres: This young Aussie dominated as a set-up man at Double-A (1.71 ERA with just 29 hits allowed in 47 1/3 IP), earning a promotion to the Padres last week. Spence sparkled in his big league debut, mowing down the middle of the Atlanta lineup in order to finish off a win on Friday, and he was equally good on Saturday. Keep an eye on this kid in leagues that track holds as he could very well emerge with value.

James Loney, 1B, Los Angeles Dodgers: Loney has been more or less a huge disappointment since arriving in the majors with a splash and enjoying a superb rookie campaign in 2007. It’s been pretty much all downhill since then, and he continued to struggle this season, with a putrid OPS of just over 400 by late-April. And while Loney still doesn’t supply the kind of power you need out of your first baseman, he’s been on a major tear lately, and deserves some Fantasy love. Over the last 14 games, he’s batting .436 and is not slowing down, with three straight multi-hit games and four in his last five contests. Loney is up to .365 in June, and — once again — you must look elsewhere for power, but if you need a boost in BA, few players are hotter right now.

Al Alburquerque, RP, Detroit Tigers: If you’re going to be named after a city, wouldn’t you prefer one that’s easier to spell like London or Boston? Well, this Tiger reliever has no so luck, but spelling issues aside, there are precious few names in his bullpen that Detroit manager Jim Leyland prefers to call upon these days. And why not? Since his recall from Triple-A in mid-April, Alburquerque has been scary good, giving up a mere 10 hits in 26 1/3 IP (a .118 BAA… really?!) with a whopping 44 strikeouts. Yes, control has been an issue (18 walks), but judging by the results, you can definitely classify Alburquerque as “effectively wild.” Need holds, strikeouts, wins and a sweet ratio for your AL-only team? Check this dude out.

Paul Goldschmidt, 1B, Arizona Diamondbacks: Goldschmidt is another prospect that’s awaiting the call, but has been delayed because the D-Backs are trying to avoid him getting Super Two status. The thing is, Arizona has been one of the hottest teams in the game – especially on the road – and it needs all hands on deck to keep the mojo going, so it probably won’t be long before Goldschmidt gets the call. The dude’s made a mockery of Double-A, batting .319 with 65 RBI and a whopping 55 walks in 73 games. Current D-Back 1B Juan Miranda was getting it done a few weeks ago, but he’s slumping now, so it’s just a matter of time before Goldschmidt gets his shot. Grab him now and stash him in anticipation of the move.

Wily Mo Pena, OF, Arizona Diamondbacks: No, we never thought we’d be typing this name again, either, but he’s back. The last time we heard from Pena, he got lost in the shuffle of a crowded outfield situation in Washington. Well, he didn’t do much in 2009, but had a big season at Triple-A last year, yet never got a sniff at the majors. This season, Pena’s minor league numbers were so gaudy he simply could not be ignored: 21 homers and 63 RBI in 63 games with a .363 BA, .439 OBP, .726 slugging percentage and mind-blowing 1165 OPS. While the D-Backs are playing in AL parks, Pena is particularly interesting, and he’s wasted no time making his mark, spanking two homers in his first five games. Pena’s got pop, no one has ever argued that, so go ahead and give him a whirl. He could give you a nice short-term shot in the arm from a power perspective.

By RotoRob
This entry was posted on Sunday, June 26th, 2011 at 1:19 pm and is filed under BASEBALL, RotoRob, The Wire Troll. You can follow any responses to this entry through the RSS 2.0 feed. Responses are currently closed, but you can trackback from your own site.