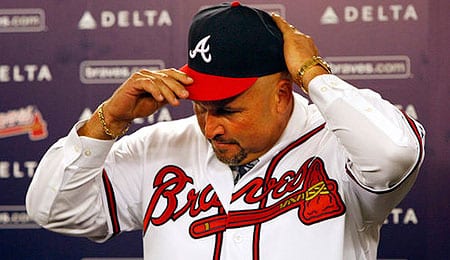 Fredi Gonzalez tried shaking up the Atlanta lineup — to no avail.

It’s an absolutely gorgeous day here in Toronto and it’s supposed to rain for the remainder of this long weekend, so I’m going to keep today’s post down and dirty with a few quick Fantasy observations so I can get the hell out of the house and enjoy the day.

The Braves have been struggling to score runs lately, so manager Fredi Gonzalez tried a new look Friday, swapping Brian McCann and Chipper Jones, shifting Jones from his traditional three-hole into the clean-up spot and installing his catcher in the third slot in the order.

It didn’t help. Atlanta got skunked 9-0 by the Angels in LA as Jones was 0-for-3 with a strikeout for his second straight hitless game following a modest seven-game hitting streak. We projected Jones as the 16th-best third baseman heading into the season and he’s probably been slightly better than that so far, but if he keeps taking 0-fers that will change shortly.

There’s also the concern about the slight tear in his knee that could require arthroscopic surgery if Jones can’t handle the pain. I’d wait for him to get on a bit of a roll and try to trade him.

One veteran that seems to be shaking off his early-season doldrums is Derek Jeter. The Captain had another hit and a walk Friday night, giving him hits in four straight games, two of which resulted in multi-hit efforts. He has struck out a whopping six times during this stretch, but he has actually showed a bit of extra-base pop, smacking a double and triple on Thursday.

We expected Jeter to be a top 10 shortstop this season, but he hasn’t even played at a top 20 level so far. The calls for the veteran to be moved down the lineup are growing louder, but it’s really hard to envision that ever happening. He’s 29 hits shy of the magical 3,000 mark for his career, and that quest is sure to bring some good vibes Jeter’s way. It might be a perfect time to try to move him as well.

It’s time to give Jon Garland a look if you need pitching help in your NL-only league. He sure ain’t flashy, but he has managed to string together five straight quality starts and today he faces his ex-team, the White Sox. It’ll be Garland first start in Cellular Field in four years.

We ranked Garland just outside the top 100 among starting pitchers heading into 2011, and his performance to date is likely a little lower than we anticipated. It’s never pretty, but he manages to avoid major damage, and that definitely counts for something, right?

By RotoRob
This entry was posted on Saturday, May 21st, 2011 at 1:18 pm and is filed under BASEBALL, Fantasy Notes, RotoRob. You can follow any responses to this entry through the RSS 2.0 feed. You can leave a response, or trackback from your own site.