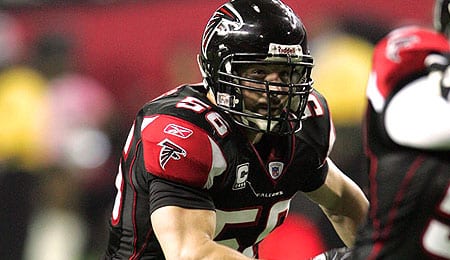 The addition of Keith Brooking from Atlanta helps plug a hole for Dallas, but may not address the Cowboys’ need for more toughness.

Long gone are the days of Saved By The Bell, Miami Vice and Plan B free agency. These days, a far more adventurous frontier of player movement occurs each spring. As the NFL Draft looms, it is time for a refresher on the NFC’s free agent happenings since February. We’ll follow with our AFC Free Agency Report shortly.

Additions – The free agency period proved to be a low key occasion for the Cowboys from a signing perspective. They added outside linebacker Keith Brooking from Atlanta and defensive end Igor Olshansky to help soften the blow of their own free agent defections. Dallas needs to improve its overall team toughness. Adding Olshansky and Brooking may not be answers to those issues.

Losses – The Cowboys made big news by releasing safety Roy Williams, cornerback Adam Jones, and receiver Terrell Owens. Without question, all three were talented players, but posed big headaches. Williams can’t cover the pass and is injury prone; Jones couldn’t stay out of trouble and wasn’t productive when he played (Pac Man’s most impressive feat may have been getting on national television late in the season and announcing his love of strip clubs. Real smart); and Owens is on the downside of his career and not worth the weekly headache. Dallas’ biggest loss may prove to be talented defensive end Chris Canty, who bolted for the Giants.

Additions – The Giants addressed one of the team’s strengths in previous years by adding defensive tackle Rocky Bernard from Seattle and bringing in Dallas defensive end Canty. It was a wise move by Giant GM Jerry Reese, who watched as the G-Men failed miserably in pressuring Donovan McNabb in the playoffs without the services of Pro Bowl defensive end Osi Umenyiora.

Additions – Of the four NFC East teams, the Eagles had perhaps the most peculiar offseason. After dropping the NFC title game to Arizona, the Birds went with a low-risk free agency approach. They brought in Browns safety Sean Jones to replace Eagles icon Brian Dawkins (more on that shortly). Also, they signed offensive tackle Stacey Andrews from Cincinnati. That move will serve a dual purpose as Andrews may have been brought in to help keep his brother, Shawn, in check. The team wisely addressed the fullback position by signing Seattle’s Leonard Weaver.

Losses – The Dawkins’ departure to Denver was a blow to the Eagle fanbase. However, the team’s brass doesn’t bend over backwards to keep guys over 30, especially those that were on the decline. Aging veteran offensive tackle Tra Thomas and tight end L.J. Smith weren’t as productive and jumped shipped as well. The Eagles choose often to do their rebuilding through the draft, trades (see the Jason Peters deal) and select free agent moves.

Additions – Defensive tackle Albert Haynesworthis in Washington courtesy of the eighth largest contract in NFL history. For seven years and $100 million, he better have an answer to the current economic downturn.

Losses – Since owner Daniel Snyder spends extravagantly, veterans had to leave to clear up cap space. Cornerback Shawn Springs, running back Shaun Alexander, linebacker Marcus Washington and defensive end Jason Taylor were all shown the door in the nation’s capital.

Additions – The Jay Cutler move dwarfed Chicago’s free agent acquisitions, which rank as uninspiring. The biggest eyecatcher was offensive tackle Orlando Pace, who should have the injury report named after him. Over the past three seasons, he has played in 23 of a possible 48 games.

Losses – The Bears did not lose much in free agency. The team’s most notable losses came via release. Receiver Marty Booker and oft-injured safety Mike Brownwere cut.

Additions – Well, when a team goes 0-16, changes are on the horizon. Defensively, Detroit added cornerback Philip Buchanon from Tampa Bay and former Atlanta Falcon defensive tackle Grady Jackson to help bolster what was one of the league’s worst defenses in 2008. They’ll need a lot more bodies, though, to fix its problems on defense. The hideous Detroit offense will get a bit of a boost from reserve running back Maurice Morris and receivers Ronald Curry and Bryant Johnson. While all three will not be confused with Pro Bowlers, they should at least help give the offense a bit of a shot in the arm.

Losses – Unless Calvin Johnson mysteriously disappears, anyone off the ’08 Lions is an immediate improvement.

Additions – Centre Duke Preston and free safety Anthony Smith represent the only free agent activity for the Packers in the ’09 offseason. That’s not exactly signing Reggie White, Keith Jackson and Sean Jones in the span of three years, is it? Green Bay opted for the less-is-more approach.

Losses – If you thought who they picked wasn’t a thrill a minute, get a load of this. The Packers only lost defensive tackle Colin Cole in free agency. Mean Joe Greene he is not. Green Bay is opting to build through the draft, folks.

Additions – Much like the Packers, the Vikings were very quiet in free agency. Receiver Glen Holt comes in to the Twin Cities from Cincinnati.

Losses – It’ll be interesting to see how Minnesota combats losing centre Matt Birk to Baltimore. Birk, a staple in the Minnesota area, was a steady player for the Vikings throughout the decade. Meanwhile, ball-hawking safety Darren Sharper fled Minny for New Orleans.

Additions – The Falcons played a conservative hand in free agency, only landing veteran linebacker Mike Peterson from Jacksonville. Considering how much Atlanta lost defensively, it’s a bit surprising it didn’t opt to build some depth.

Losses – Atlanta lost six defensive players to other teams including defensive tackles Rod Coleman and Grady Jackson; cornerback Dominique Foxworth; and linebackers Michael Boley and Keith Brooking. To the Falcons’ credit, most of the departed have some years on them except Boley, who enters his fifth season. Expect Atlanta to fill the gaps on defense in the draft.

Additions – All was quiet from the team that finished their season with a humiliating home loss to the Arizona Cardinals in the NFC playoffs. While the Panthers were roughly $13 million under the cap coming in, they devoted their resources to franchising defensive end Julius Peppers. After finishing 12-4 in ’08, the Panthers saw little in the ways of improvement via free agency.

Losses – The team didn’t suffer serious losses. Instead, it opted to cut ties with wide receiver D.J. Hackett, running back Nick Goings, cornerback Ken Lucas and defensive tackle Darwin Walker. By the way, it hasn’t been a fun year for Lucas, who gets punched out by then-teammate Steve Smith, but gets released in the long run. Let that be a lesson to you kids. Sports is part performance, part politics.

Additions – The clear goal for the Saints in the offseason was to upgrade the defense. Cornerback Jabari Greer comes in from Buffalo, while safety Darren Sharper brings experience aplenty with him to the Saint secondary. Meanwhile, defensive tackle Rod Coleman arrives from Atlanta to give the Saint defensive line a boost. The 23rd-ranked defense in the NFL surely could use the help.

Losses – The biggest off-season note for the Saints was the release of New Orleans favourite Deuce McAllister. After numerous knee injuries, the time arrived for the Saints to cut ties with one of the most productive players in team history.

Additions– With money to spend, the Bucs decided to go after Giant running back Derrick Ward. He’ll join a backfield featuring Ernest Graham, which should provide a formidable “thunder and lightning” combination. Speaking of offense, Byron Leftwich will take his newly acquired Super Bowl ring from Pittsburgh and join a muddled quarterback picture in Tampa.

Losses – The Bucs made waves in the offseason by releasing five previously productive veterans including linebackers Derrick Brooks and Cato June, running back Warrick Dunn, and receivers Ike Hilliard and Joey Galloway. A team that blew a playoff spot down the stretch in part because of its age needed to get younger and fast.

Additions – Kurt Warner dominated a lot of the free agent talks for Arizona, which spent much of the offseason paying attention to its in-house free agents instead of busting the bank for guys from other teams. That didn’t stop the NFC champions from weakening its Super Bowl foe, the Pittsburgh Steelers. Cornerback Bryant McFadden will join a secondary that failed to cover Santonio Holmes in the Super Bowl’s final two minutes, thus costing them the Vince Lombardi trophy.

Losses – Running back J.J. Arringtonand up and coming defensive end Antonio Smith left for Denver and Houston, respectively. Neither loss is necessarily crippling, but both defections damage the depth of the Cards just a bit.

Additions – The Rams seemed to do a lot more shedding of talent than acquiring it. Two of their biggest moves included signing centre Jason Brown and quarterback Kyle Boller from the Ravens. Do I hear restructuring through the draft?

Losses – Two of the last links to the ’99 Rams were cut loose by new head coach Steve Spagnuolo. Torry Holt and Orlando Pace are gone. The same goes for receiver Drew Bennett, whose time in St. Louis was marred by injury. By the way, here is a quick exercise. Write down the Rams’ starting receivers within the next five minutes. I bet you can’t do it.

Additions – Offensive tackle Marvel Smith was the prized possession of the 49er free agency plan. He’ll help shore up a unit that doesn’t do anything particular well, but has managed to be maddeningly mediocre for nearly a decade. Also, Brandon Jones joins the team from Tennessee to bolster a lagging wide receiver group.

Losses – The ‘Niners are not a talent rich team and other clubs aren’t exactly knocking down their door to steal players. ReceiverBryant Johnson left for Detroit, but otherwise San Francisco did not suffer wildly big hits in free agency.

Additions – One of free agency’s biggest prizes landed in Seattle in the form of T.J. Houshmandzadeh. Over the past few seasons with quarterback Matt Hasselbeck on the shelf and a rash of receiver injuries, the team’s passing game laboured a great deal. Houshmandzadeh gives them credibility at the receiver spot which the ‘Hawks greatly need.

Losses – Seattle’s depth took a hit with the losses of running back Maurice Morris and fullback Leonard Weaver. Don’t be surprised to see them possibly pick up a running back in the later rounds of the NFL Draft. Meanwhile,the Houshmandzadeh signing made Bobby Engram expendable. It might hurt in the leadership department, but in his 13th season, Engram’s productivity likely already crested.

By Derek Jones
Tags: NFL
This entry was posted on Thursday, April 23rd, 2009 at 12:11 pm and is filed under Derek Jones, FOOTBALL, Free agents. You can follow any responses to this entry through the RSS 2.0 feed. Both comments and pings are currently closed.