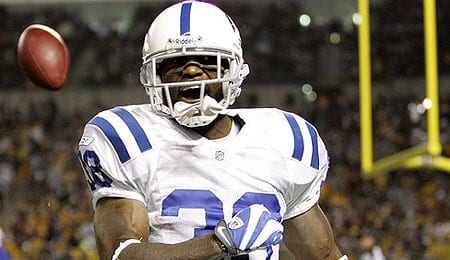 New Bill back Dominic Rhodes will put up nice numbers in the early going with Marshawn Lynch suspended for the first three games.

Earlier this week, we released the NFC portion of our NFL Free Agency Report. Today, we’ll switch to the AFC, starting with the East.

The Skinny – The Buffalo passing game was putrid in 2007 and pathetic in ’08, but may actually scale the dizzying heights of Mediocrity Mountain now that T.O. is in town. Owens should become the red zone target that the Bills have lacked since…well, forever. The Bills’ team record for TD catches in a season is a mere 11 – a figure T.O. has exceeded no fewer than seven times in his career. The big wideout should also draw attention away from talented but oft-forgotten receiver Lee Evans, who found the end zone only three times in 2008. Owens and Evans give the Bills one of the league’s most dangerous wide receiver tandems, and could mean that a new era of aerial firepower has been ushered into the frigid environs of Western New York.

The passing attack will probably have to carry the water (or ice) early on, since troubled running back Marshawn Lynch will be serving a three-game suspension to start the season. Former Colt and Raider Dominic Rhodes should be the feature back in Lynch’s stead, but he’ll be running behind a suspect offensive line that will be without Pro Bowler Peters, who was traded to Philadelphia. Even when Lynch returns, Rhodes should see some third-down and spot duty – further diminishing Lynch’s already floundering Fantasy value. The lack of a running game, and the presence of two top-notch wideouts, could actually make quarterback Trent Edwards (gasp!) Fantasy relevant — at least until the Buffalo winter closes in shortly after Labour Day.

The Skinny – The Fins were one of the league’s most surprising teams in 2008, and largely played a pat hand in the offseason. Wilson racked up 134 total tackles for the Raiders last season, and should team with Yeremiah Bell (who had 120 for Miami) to form a solid one-two punch at free and strong safety. The Miami defense was pretty darn good against the run in 2008, and Wilson’s arrival should bolster a secondary that finished 25th against the pass a year ago. Not that Wilson is afraid to stick the run – 98 of his tackles last season were of the solo variety. Holliday’s 3.5 sacks won’t be greatly missed – especially since he’ll turn 34 this season.

The Skinny – Some guy named Tom Brady will be asked to fill the big shoes of departed signal caller Cassel, who threw for almost 3,700 yards and 21 TDs last season, but we’re thinking the big kid from Michigan should be up to the task. Mr. Gisele will have another pair of targets in the big Baker and the elderly Galloway, but Randy Moss and Wes Welker should still see most of the targets. Running back Taylor is more durable than his rep would have you believe, but at 33, he’ll likely be no more than a role player in this offense.

The trade of Vrabel leaves a big hole at outside linebacker, and it wouldn’t shock us a bit to see the Pats try to snag an impact ‘backer early on draft day. Springs is an excellent corner when he’s on the field, but a spotty injury history may limit his playing time. Bodden had a fine season for Cleveland in 2007, but took a step backward in Detroit last year.

The Skinny – The Jets hope that Leonhard and Sheppard can help shore up what was a very leaky secondary last season, while Scott will team with David Harris to form a potent duo at inside ‘backer. Harris had a stellar season in 2007, but his ’08 campaign was pockmarked by injuries. Scott hasn’t been much of a pass rusher since he blew up for 9.5 sacks two seasons ago, but that could change in his first year with Gang Green. Sheppard is a decent pass defender whom the Jets rely on to provide some stability (by which we mean the ability to occasionally knock down a pass) opposite budding star cornerback Darrelle Revis.

Coles’ departure figures to sting in a big way; his toughness and ability to work underneath the coverage would have been valuable assets as young quarterbacks Kellen Clemens and Mark Sanchez learn the ropes. Baker’s departure should pave the way for tight end Dustin Keller to make his way onto virtually every Fantasy sleeper list heading into the ’09 season. If you like your tight ends late and with a double-shot of upside, DK could be your man.

By Buck Davidson
This entry was posted on Friday, April 24th, 2009 at 9:09 pm and is filed under FOOTBALL, Free agents. You can follow any responses to this entry through the RSS 2.0 feed. You can skip to the end and leave a response. Pinging is currently not allowed.