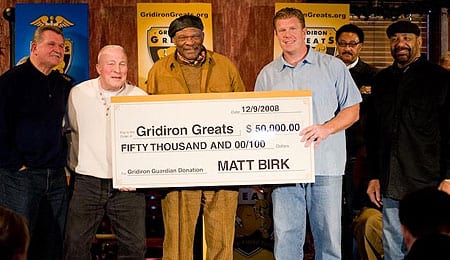 After signing a three-year, $12 million deal with the Ravens, Matt Birk (third from right) will have plenty of coin to be charitable.

We continue our look at NFL Free Agency today with the AFC North. We’ve already covered the NFC and the AFC East.

The Skinny – The ravenous Raven defense lost three starters over the offseason, and the advancing age of linebacker Ray Lewis and D-tackle Trevor Pryce is definite cause for concern. Nonetheless, this should be a dominant unit again in 2009.

Not so much for the offense; Birk’s presence in the middle of the line should help, but there are legitimate worries about the play of both offensive tackles. The run-oriented offense favored by the Ravens needs a beefy and athletic O-line to succeed, but the pedestrian 4.0 yards per carry B-More racked up as a team in ’08 bespeaks a line lacking in…well, beefy athleticism. Four-oh per crack won’t get the job done when your passing game is mediocre at best.

Smith will be there to fill in at tight end when Todd Heap succumbs to his annual injury woes, but the big guy has battled health problems of his own over the past two seasons. The concern for fantasy owners is that L.J. will steal some catches away from Heap, negating the value of both Baltimore tight ends.

The Skinny – Coles is not as skilled as Houshmandzadeh, but the veteran is a good route-runner and tough as nails. True to the Bengal tradition, he has also had a few brushes with the law in his time – and if he offers you a great deal on shoes, don’t take him up on it. In fairness, Coles has stayed out of trouble since the infamous Dillard’s incident back in ’99, and his ability to make the tough catch in traffic should make him a fan favourite as the Bengals try to reload their guns on offense.

And speaking of firearms, defensive tackle Johnson will compete for playing time inside – mostly as a run-stopper. The Tank is still only 27 years old, but won’t pile up enough tackles or sacks to be Fantasy relevant.

O’Sullivan figures to be Carson Palmer’s backup, but could be in line for the starter’s job if Palmer’s elbow isn’t ready to go – or if he suffers a setback. Palmer should be fine, though, and the nosedive O’Sullivan’s game took after the league adjusted to him last season should warn you to stay far away on draft day.

The Skinny – Barton should help shore up a defense that was awful against the run last season, but he’s not a big producer of sacks or turnovers. The loss of Winslow and the uncertainty surrounding wideout Braylon Edwards stands to hamstring an offense that wasn’t very good to begin with.

And furthering the “not very good” theme, Patten may actually win a starting wideout job opposite Edwards, especially given 2008 starter Donte’ Stallworth’s current serious legal troubles. Stallworth could possibly land in prison as a result of the charges against him, and it is very uncertain as to how much – or if – he will play this season. The Browns added a couple of young wideouts in the draft (most notably Brian Robiskie of Ohio State), but it’s very likely that Patten enters Week One as the starter. The 34-year-old went for 54-792-3 in New England’s pass-happy offense in 2007, but there’s nothing happy about the Brown passing game right now. At this point in his career, those 2007 numbers are probably Patten’s ceiling. Please try to contain your excitement.

Key Signings – None. One big addition: The Vince Lombardi Trophy.

The Skinny – The champs played a pat hand in free agency this offseason, preferring instead to address their team needs through the draft. Though Pitt should again be a force in 2009, it’s no secret that this team is getting a little bit long in the tooth – especially on the defensive side of the ball.
Washington’s ability to get deep will be missed, but his skills were not irreplaceable – and third round pick Mike Wallace will get the chance to make Pittsburghers forget all about Nate. The speed burner from Ole Miss scorched a 4.33 40-yard dash at the combine after averaging 20.1 yards per reception last season. He’s still raw, though, and probably won’t make much of a dent in the passing game this year, but could become a dangerous return man almost immediately. Leftwich joined roughly six dozen other mediocre quarterbacks on Tampa Bay’s depth chart, but Charlie Batch has shown in the past that he’s capable of carrying the water for a brief period. McFadden is a solid corner when healthy, but that “when” hasn’t been very often of late.

By Buck Davidson
Tags: NFL
This entry was posted on Monday, April 27th, 2009 at 8:57 pm and is filed under Buck Davidson, FOOTBALL, Free agents. You can follow any responses to this entry through the RSS 2.0 feed. Both comments and pings are currently closed.