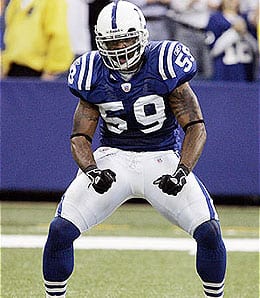 The Texans hope to get more out of Cato June than he showed in Tampa Bay.

The Skinny – June joins the Texans after two mediocre seasons in Tampa Bay, and the fact that the Bucs were willing to let him walk speaks to his limited abilities as a playmaker. He’s a decent pass defender, but not very tough against the run, and with just one sack in six seasons he’s not much of a Fantasy option, either.

Green’s long history of knee injuries limits his options as to where he’ll play in 2009. Seems there’s not much of a market for 32-year-old running backs with creaky knees in the NFL, and even if Green lands in a favourable situation, there’s no reason to believe that he’ll stay healthy long enough to make a Fantasy impact. Move along, nothing to see here.

Greenwood had an awful season in 2008, but the 30-year-old ‘backer had racked up four straight seasons of 100-plus tackles prior to last year. The Texans are very strong at linebacker, though, and became even better when they drafted versatile Brian Cushing with the 15th overall pick.

Key Signings – None of note.

The Skinny – The Marvin Harrison Era appears to be over in Indianapolis, and after a pedestrian 60-636-5 line in ’08, Marvelous Marvin is clearly nearing the end of his storied career. If he lands in the right situation, Harrison could still put up serviceable numbers – but it would appear that his days of 100-plus catches and double-digit TDs are just specks in the rear-view mirror.

Running back Joseph Addai’s Fantasy value took a jump upward when understudy and noted TD poacher Rhodes left town, but that balloon burst in a hurry when the Colts drafted Donald Brown of U-Conn with their first round draft pick. Brown led the nation in rushing last season, and could become the starter in Indy if the brittle Addai can’t stay healthy. Chances are that a two-headed monster is about to be unleashed in the Colt backfield; good for them, but bad for Fantasy owners.

The Skinny – The departure of Taylor and signing of three-time Pro Bowl left tackle Thomas means that running back Maurice Jones-Drew has a chance to become one of Fantasy football’s top players in 2009. While we’ve heard that line before, MJD quietly put up some very nice numbers in 2008, and figures to get the rock a ton in ’09. And therein may lie the problem: Drew has never carried the ball more than 200 times in an NFL season, and his diminutive stature makes him an injury risk…ah, but the potential reward.

By all accounts, Holt’s 2008 season was a bust: 64 catches, 796 yards and just three touchdowns. However bad it was, that sickly line still led the Rams, and also would have led the Jags had Holt posted it in J-Ville. Holt’s lousy ’08 campaign snapped a personal streak of eight straight seasons with at least 81 receptions and 1,188 yards, and the veteran has vowed that he’ll rebound in 2009. Don’t get all excited, though: David Garrard is still the quarterback in Jacksonville, after all – and Holt has definitely lost a step (or two) since the heyday of the Greatest Show on Turf. We’d advise drafting Holt as a low-end No. 3 wideout and playing him when the situation looks right.

Peterson could be a beast when he’s on the field – but with only 30 games played the past three seasons that beast didn’t get to show its teeth very much. Deep IDP leaguers should keep an eye on who wins the starting gig for the Jags, as that player could be a sneaky source of tackles.

The Skinny – The loss of one of the game’s best D-linemen will undoubtedly hurt the ferocious Titan defense, and Haye should not be viewed as anything close to a substitute for Haynesworth. Second round draft pick Sen’Derrick Marks of Auburn, though, showed some playmaking ability in his college career.

Washington gives the Titans a true home run threat, but he has yet to show the kind of consistency that will win – and hold – a starting NFL gig. He’ll team with the frustrating and fragile Justin Gage to give Tennessee an exciting and enigmatic duo at wide receiver. Translation: Don’t expect great numbers week-to-week with these guys, but either is capable of a big game here and there. If your league rewards long touchdowns, know that Washington’s three scores last season came from 48, 50 and 65 yards.

By Buck Davidson
Tags: AFC, Colts, Jaguars, South, Texans, Titans
This entry was posted on Sunday, May 3rd, 2009 at 10:14 pm and is filed under Buck Davidson, FOOTBALL, Free agents. You can follow any responses to this entry through the RSS 2.0 feed. You can skip to the end and leave a response. Pinging is currently not allowed.