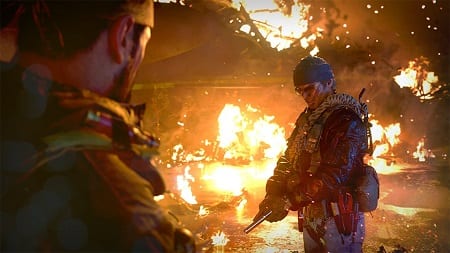 Burn it down. Burn it all down.

When Infinity Ward went with a soft reboot of its long-running Call of Duty series with last year’s Modern Warfare, you had to wonder if Treyarch would do the same with Black Ops, especially after it punted on the campaign in the most recent installment. In a way, it does, with the all-new Cold War taking place in the 1980s, making it much more of a direct sequel to the original than the previous games that jumped far into the future.

For whatever grief people like to heap on the Call of Duty franchise, ostensibly for its annual release schedule, it’s hard to make much of a case that the games don’t handle incredibly well and provide a wide range of feedback for its various guns. Cold War doesn’t really have any new tricks up its sleeve and trots out a number of series staples, such as controlling an AC-130 to defend an overrun position, but nothing overstays its welcome and it all feels responsive.

Visually, Cold War feels like a step back from last year’s Modern Warfare and maybe even WWII, though perhaps the Xbox Series X and PlayStation 5 versions fared better — we reviewed on the Xbox One X. Everything looks fine, and there are some fun locations, most notably the Main Street combat simulator, but it’s not pushing the envelope. It’s also worth noting that we encountered severe lag during the in-between mission briefings when the video would slow down and end up well behind the audio.

Speaking of the audio, the sound effects remain first rate with the sounds of battle going on all about you consistently delivering. Voice acting is solid as well. It’s not Mass Effect in terms of character building, but at least people are given stuff to do in what is a less action-heavy plot than your typical CoD fare.

Despite being the fifth title under the Black Ops banner, Cold War is actually a direct sequel to the original Black Ops released back in 2010. We pick up in the early 1980s with familiar faces Mason and Woods ready to do a little wetwork with CIA handler Russell Adler, eventually uncovering a nuclear threat posed by a Soviet operative known as Perseus, who the U.S. believed had been killed during the Vietnam War.

Given the go-ahead by President Reagan, Adler and company assemble a unit composed of CIA assets along with representatives of Mossad and MI-6. An additional agent, known only as Bell, is also brought in. You play as Bell and are given some leeway into personalizing the backstory of the character. It’s not much, but it’s something we haven’t seen in CoD before. Once together, the team must track down every lead to find Perseus and prevent him from detonating top-secret nuclear weapons spread across Europe.

As noted, this is a more subdued campaign than other recent CoD titles as it trades a lot of the over-the-top antics for some subterfuge and spycraft elements. There are certainly plenty of firefights within many of the missions, but it’s the ones that deviate from that path, at least for a time, that prove to be standouts — like targeting a potential lead in East Germany or infiltrating the KGB headquarters for a needed piece of info. There’s nothing particularly remarkable here, but it was still a fun five- or six-hour ride.

Of course, Call of Duty‘s longevity comes from its multiplayer modes, and Cold War packs plenty of content on that front. Old-school competitive multiplayer is how we spent much of our time, and it’s clear that Treyarch wanted to pump out a simplified version of what had become an increasingly elaborate selection of bells and whistles. This is pretty much straightforward run-and-gun stuff with basic killstreaks and loadouts that harken back to when the Black Ops subset began if not even earlier.

How you feel about that will probably be determined by how long you’ve been playing the series. For us, who still believe that Modern Warfare 2 was probably the apex of CoD multiplayer, scaling things back is just fine. For others that joined the fray more recently, it may feel a little barebones. Whichever side you fall on it’s hard not to feel like there should be a larger, more diverse selection of maps available — in fact, what’s there now is almost like a throwback to the days when post-launch map packs were big business.

When you consider the humble roots of how Zombies mode began back in World at War it’s quite amazing what it has grown into. Granted, it’s become something of a paint-by-numbers setup with its approach, but there’s no denying its popularity. We waded into the dead-filled waters for a couple of hours, reaffirming that it’s still as chock full of action and insanity as ever (and also that the time commitment required for deep progression just doesn’t fit for us any longer).

Call of Duty: Black Ops Cold War offers an interesting mix of content with a campaign that dials back some of the more grandiose spectacles the series is often associated with and a multiplayer that streamlines its systems to be more in line with CoD‘s of ages past. The result is a solid installment, but one that still feels like a step backward from last year’s excellent Modern Warfare.

With the narrative moved to the background, the gameplay and loot gathering are left to carry the load. While there’s undoubtedly a mindless charm to wading through dozens of enemies, neither the challenge nor the amount of interesting loot are as compelling as we would’ve liked.

Two fairly meaty DLCs are included as well with The Legend of Dead Kel and Teeth of Naros adding new races and regions along with additional features. Even sticking with the main story pushed well past 30 hours, so those with the time and inclination could easily more than double (and perhaps triple) that.