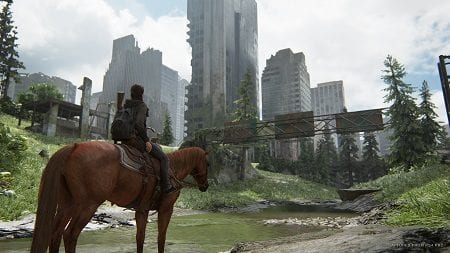 By far the most significant addition is the ability to jump. While it doesn’t sound like much, the effect on level design is massive and fundamentally changes what moving through the world feels like, opening up new pathways and areas to explore. Even moving at a deliberate pace and searching for every possible resource and collectible, we still ended up missing dozens of them on our initial playthrough, which speaks to how packed the game is with things to discover.

Inventory management still causes the occasional headache and prevents full marks in this area. As with the original, you’ll need to scavenge for resources that are then used to craft things like health packs, Molotov cocktails, arrows and more. Much of this is assigned to the d-pad, and as you progress and collect more items it grows more cumbersome to manage. On the bright side, it’s extremely rare that it gets in the way during a critical time.

Visually, The Last of Us Part II sets a new standard for the PS4/XB1 console generation. The detail and world design are impeccable, and the lush way nature reclaims buildings is consistently gorgeous. Character animations are top notch as well, especially during combat in which the game pulls no punches with its gritty violence. Cut scenes look amazing, and all of the actors involved deserve tremendous credit for their performances.

It’s a darker, more nuanced story than the original, which featured great world building, but was ultimately about protecting what you love at all costs. That relative simplicity of purpose is nowhere to be found here. To avoid spoilers there isn’t a lot else we can discuss about the story beats, but suffice to say there’s a lot to digest, and there were times when the game wore us down under its relentless sense of loss.

Each group offers unique approaches and necessitates different tactics. The Wolves are a mostly traditional armed militia, whereas the Scars typically favour bladed weapons and use whistles to communicate. The infected have been tweaked to be more dangerous, often by grouping them up with different types. For instance, runners are weak but can see you. So if you’re discovered, the clickers — which are blind but much stronger — will activate and attack.