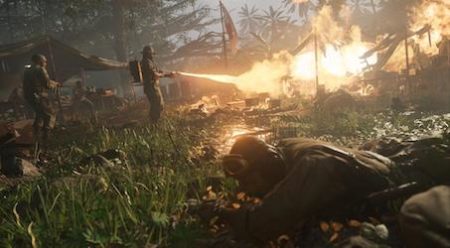 With a new installment of Battlefield on the horizon, not to mention the first Halo game to launch in more than six years, the FPS market is about to get awfully crowded. Activision kicks off the madness with its latest Call of Duty release, Vanguard, which once again takes the series back to the ever-fertile ground of World War II.

It’s been a long time since any substantive changes were made to how the Call of Duty games handle, and Vanguard doesn’t rock the boat in that regard. Aiming feels tight as always, and the deep well of weapons from which the game draws provides different experiences, encouraging you to cycle through them across all three modes. Some of the climbing aspects of the campaign feel a little out of place, but they’re not prevalent enough to do any harm.

Although Cold War did include a PS5/Series X upgrade, Vanguard is the first game in the series to feature real development time for the latest generation of consoles. It should come as no surprise then that Vanguard features some truly excellent graphics during its campaign, particularly during the cinematic cut scenes.

The campaign’s flashback-heavy presentation allows the game to jump around to multiple theatres, allowing dramatically different environments as you visit the Pacific, Africa, the Soviet Union and more. Weapons and explosions pack their usual punch, and the voice acting is solid work.

As noted, Vanguard takes the series back to World War II, casting you as a multinational special ops unit tasked with infiltrating 1945 Berlin to locate information about a secret Nazi project. You’ll spend time as each member of the group, experiencing their earlier exploits that led to them being recruited for this team.

Each soldier has a particular set of skills, and their missions feature those abilities, setting the stage for a fairly diverse suite of tasks. For example, Wade Jackson is a pilot, and you’ll get to take part in aerial dogfights as part of a bombing run. Polina Petrova is the resident sniper, so you’ll play her role in the Soviet resistance after the Nazis occupy Stalingrad. Each character also has a unique skill — giving orders, fitting into small spaces, etc. — that is incorporated.

It’s about what you’d expect from a Call of Duty campaign: roughly six hours in length, lots of big set pieces, numerous escapes from certain death and a decent cast of heroes and villains. If you tend to have fun with the single-player aspect, there’s no reason to think you wouldn’t enjoy what Vanguard has to offer.

As ever, though, multiplayer is the featured attraction. Here it consists of traditional PvP, a co-operative zombies mode and the battle royale Warzone, which launches in December. Let’s start with zombie mode, which has never really been our cup of tea. This mode, which was created by Treyarch, has been streamlined to a surprising degree.

Gone is the invariably wacky quest line and increasingly difficult rounds, replaced by an objective-based hub. While stripping it down is likely to bother long-time fans, it felt more accessible and enjoyable to us, though how much longevity it will hold is up for debate.

It may be fair to ask the same question for the traditional multiplayer, which feels like a throwback effort with all the usual stuff players have come to expect from Call of Duty and not a whole lot else. If you were coming into Vanguard hoping for significant tweaks from the progression system or gameplay loop you’re going to leave disappointed. It plays the hits, through and through, for better and for worse.

As it happens, we’ve long enjoyed the CoD take on first-person shooters, offering a constant stream of unlocks or upgrades that provides the feeling that you’re always earning stuff. The map selection is also top notch. Typically we’ll bump into a handful of maps early on that we simply don’t want to play, but with the possible exception of the claustrophobic Das Haus, which can have a major spawn camping issue if one side gets overrun, this is as about as good as you can hope for from a launch.

One issue worth discussing is Vanguard‘s use of operators. Whichever one you select will earn experience independent of your rank and weapon, and as you level it up you’ll unlock different cosmetic variants. Sounds fine, right? Well, here’s the thing, everyone is selecting from the same limited pool of operators on both sides of the battle. That means there’s no visual distinction between your teammates and your enemies other than the name that appears above their head. That’s not great, especially in close quarters when the split-second it takes to register whether it’s friend or foe leads to you being killed.

There are still some legacy gripes on our end as well, most notably with dissuading some of the more ridiculous play styles we encounter… for example, the person that’s constantly sprinting and jumping. One of these years they’ll figure out how to assign an aiming penalty of some kind to seriously curb that highly unrealistic approach.

For all the things it isn’t, Call of Duty: Vanguard succeeds in the most important area. It’s fun, and it consistently entices us to play one more match. So, while we’re ready for CoD to take a legitimate step forward sooner than later, we’ll still get hours of enjoyment here.