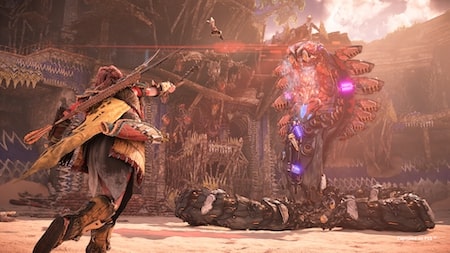 Snakes… why’d it have to be snakes?

While Sony has shown little trouble in creating entertaining and original series, one area where it consistently outshines Microsoft, Horizon Zero Dawn still managed to stand out when released five years ago. Now we’re finally getting the eagerly anticipated sequel with the launch of Horizon Forbidden West, which looks to build on the original. Time to dust off our trusty bow and bring down some machines.

There have been some changes to Aloy‘s arsenal, both in terms of weapon types (such as the spike thrower) and ammo, but the spear/bow and arrow combo remain the star attractions. It all feels extremely satisfying once you get the hang of it, and this might be the best use of the PlayStation 5 controller’s functionality to date. Managing weapon stamina and concentration, which allows you to slow time for more precise shots, are critical to success, and it’s a lot of fun to chip away machines piece by piece.

One area that has taken a definite step up is voice acting. Between the main story and side quests you’ll be interacting with lots of people, all of which are unique and interesting, which helps give the world a lived-in feel. About our only quibble comes from the exploration element in which Aloy would frequently get semi-stuck with modest changes of ground elevation, leading to some wonky leg movements. Climbing in general felt dicey and below much older titles like Tomb Raider and even Ezio-era Assassin’s Creed.

Forbidden West opens shortly after the events of Zero Dawn with the revelation that Aloy’s big victory over HADES didn’t save the world after all, and there’s still more work to be done. With a spreading blight signaling the end times, Aloy sets out to reboot the GAIA terraforming program that’s needed to stave off the latest bout of extinction. Standing between her and mission accomplished are a bevy of killer machines, rogue AIs, dangerous rebel tribes and a new threat from beyond the stars.

It’s a decent story, albeit one that’s not always delivered in the most palatable manner. Granted, some of the starts and stops are necessary to fit into the open-world style where it’s easy to get sidetracked for hours tracking down parts and completing secondary activities, but even taking that into account it’s not the smoothest narrative experience.

Where Forbidden West shines is with its characters. Its detailed approach to side quests, which are well fleshed out and not the repetitive “go here, get this” stuff you often get in this style of game, while introducing dozens of secondary characters that still feel like they have their own story to tell, even if you’ll only ever hear a fraction of it. Aloy’s companions and foils are also extremely well written and performed, especially if you take the time to go through the various dialogue trees available.

As it happens, however, the strength of the game’s peripheral characters lays bare perhaps its biggest fault: Aloy isn’t that interesting. Or, maybe more accurately, she seems disinterested in what’s going on. She’s not a bad main character, but her semi-snarky attitude doesn’t fit the seriousness of her situation. Her reluctance to accept help never rang true, either, considering that her failure would result in the end of humanity.

Thankfully, whatever issues Aloy might have in terms of personality, she’s more than capable of kicking serious ass, both human and robotic. The machines range in size and complexity, and even smaller ones can be dangerous to engage en masse. Scanning them will allow you to tag specific components. Some are weak points, but others double as essential crafting materials.

In this way, Forbidden West deftly allows more skilled players to shine while still giving less accomplished gamers a path forward through brute force since many components are rendered useless if you fully destroy a machine or stealth kill it using the silent strike ability. Those parts are typically available in trade as well, though, making it so those same players can still get their hands on necessary resources.

A sprawling upgrade system allows you to invest points into whatever approach suits your gameplay style. For example, the warrior branch features nodes that do things like make your strikes stronger or add new melee combos, whereas the hunter branch will make your bow more deadly and extend your allotment of concentration time. It’s a good system, though the lack of a respec function is unfortunate.

As you’d suspect from an open-world game of this scope, there is a ton of content that should easily push you north of 50 hours. As mentioned, the side quests are really strong, and it’d be great if future titles put as much thought into creating optional content. Beyond that, you’ll take down rebel outposts, play Machine Strike (a strategy board game), fulfill supply contracts, upgrade weapons and armour, and much more.

Is Horizon Forbidden West a better game than Zero Dawn? Yes. It doesn’t quite make the same sequel leap as standouts like Mass Effect 2 or Assassin’s Creed did, however. Still, it offers up a lot of quality content presented within a gorgeous world, making it a title that belongs in any PS5 owner’s collection.