Video Game Review: The Last of Us 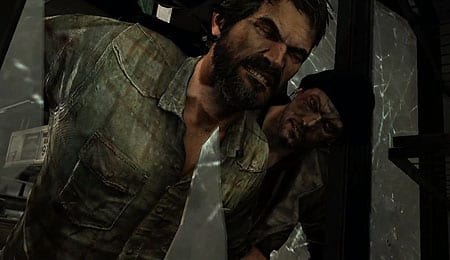 By Casey Curran and Herija Green

For me, The Last of Us did not start with the strongest impression. The first section felt like something out of Heavy Rain — and not in a good way. This was followed by a shift to years later, full of cut scenes and walking with no real interesting gameplay hook. I was preparing myself for another game that was designed to ensure I played as little as possible, and then it finally threw me into my first combat encounter. After that, I enjoyed every single second.

Controls in The Last of Us feel like they are somewhere between Uncharted and Metal Gear Solid 4 with some survival horror elements mixed in. The game employs an auto-cover system very similar to the recent Tomb Raider reboot, though structured in a way that favours stealth. Yet the controls also reflect that the main character, Joel, is not as capable with fighting or a gun as the likes of Nathan Drake or Solid Snake — his aim isn’t as steady, and he can be taken out by just about anyone. Overall, the setup works very well for both exploration and combat.

There were some nitpicks along the way, however. Picking up supplies is done with the triangle button, which works well during exploration, but if you need to scoop up some ammo that’s near a bottle during a fight you may grab the bottle instead. Inventory management can also be confusing. Many weapons and items are mapped to a single d-pad direction and, depending on whether the inventory is up or not, pressing a direction can have the exact opposite effect. These two issues got in the way a handful of times, but there was only one instance when this actually caused me to die.

The Last of Us will long be remembered as the game that pushed the PlayStation 3 to its absolute limit in the graphics department. Naughty Dog once again captured Uncharted’s spectacular character animations in which the player, allies and enemies all move like real human beings. This is especially impressive given the surprisingly numerous animations used for melee kills, all of which provide a very satisfying way to take out enemies.

In addition, the environmental effects were quite incredible. The game has lighting just as impressive as the Dead Space games in which a flashlight is required to navigate the darker areas. There is also a contaminated fog in certain sections that does a stunning job of limiting your long-range vision, while closer objects are more easily visible. The Last of Us did a fantastic job of using these environmental areas to not only bring variety to the gameplay, but to do so in a way that the world still looked fully believable.

The voice acting in this game is absolutely fantastic. The characters, while not original, are so well done in both writing and delivery that the game’s dialogue is on par with the best BioWare has to offer. There wasn’t a single character that I did not like, with a special mention going out to Ellie’s performance.

She strikes a fantastic balance between being hardened by the cruel world she lives in and displaying traits of innocence, all of which is then combined with a sharp wit. Many comparisons will be made between her and Joel to that of The Walking Dead’s Lee and Clementine, but despite the father figure taking care of the young girl, The Last of Us does a great job separating its world and characters from Telltale’s.

Naturally, the plot was very character driven because of this, and yet the world in which it took place still stood out from other zombie apocalypse settings. This was because the zombie outbreak was caused by a fungus, which allowed for interesting changes in victims later on. Picking things up 20 years after the initial outbreak, at a time when society had already crumbled and the only options are to live in oppression in a city or live in fear of what is outside, helped as well.

Music and sound effects continued to impress the whole way through, and just not because of their quality, but rather how they were incorporated into the gameplay. A great example is how stealth sections would be silent until I was discovered. Then there’d be a cue followed by some intense music that fit the tone very well. Meanwhile the effects felt perfect for the survival combat as they helped make headshots and melee finishers incredibly satisfying.

Despite the common theme of Naughty Dog taking tried and true elements from other games, The Last of Us feels different from any other game I’ve played. Stealth and horror end up blending together fantastically as they’re both centralized on how Joel is physically unable to take these enemies on himself, creating a feeling of vulnerability that complements each of these elements beautifully.

Encounters offer a variety of options to take enemies down including Molotov cocktails, homemade bombs and old fashioned sneak attacks. The game lets the player decide which tool is best to use or whether it is smart to save them for later. In fact, there were instances when I avoided enemies altogether because I wanted to save what little ammo and items I had.

This works well with the game’s crafting, which is done in real time with many weapons and items being molded from the same materials. This produces scenarios in which the player must decide whether to create a little bit of each item to be prepared or save the resources until they find the perfect opening (and be a sitting duck while crafting). This preparation even applies to the weapons as there are very limited slots and pulling out a loaded weapon from your pack can take enough time to make yourself vulnerable.

Enemies are a formidable threat in The Last of Us. Unlike Uncharted’s enemies, which charged you at all costs, human survivors will hide behind cover, try to flank you and fight in a manner in which they not only try to eliminate you but make sure they live to tell the tale as well. As you’d suspect, there are very different tactics between zombies and humans ensuring fighting these two feels unique. There are also different types of zombies, yet even small differences completely change how encounters play out.

However, the absolute best part of The Last of Us is how well paced it is. This is the best pacing I have seen in a game since Resident Evil 4. There is a great variety between how encounters play out. Some of these are meant to pick out enemies one by one. Some require taking out a small group with a bomb. And in others it’s best to leave enemies alone.

Even who you are fighting alongside can make all the difference. Some allies will be a great asset, while others can help in small ways, but need protection at all costs. The game also offers new types of engagements, which can involve surviving waves of enemies until help arrives, sniping to create a safe path, or just running from a threat behind you. You never feel like you’re overdoing anything in The Last of Us, which made the gameplay always feel fresh.

The combat scenarios were always intense and proved to be the best part of the pacing. The sections between this offer little other than scavenging for new supplies, and yet exploring rooms is strangely addicting as I found myself searching through every room and area I could find. These help build the world as well with notes scattered throughout the areas. These were not only interesting reads, but the characters provided additional commentary on them. Little touches like these made the world feel so much more alive and made me more compelled to find collectibles than usual.

Multiplayer manages to capture the fun of the single-player well. There are two modes, both of which are based around teams of four. The only real change between these is whether the player spawns a few seconds after dying with the goal to outscore the opponents or survive until the end of a round with the goal to win the most rounds. These still involve scavenging for supplies and crafting weapons and items, which makes the multiplayer very unique. And while I may not be playing months from now, I still see myself sinking a lot of time into it.

Calling The Last of Us one of the best games this year does not do it justice. It is one of the best games this generation. It is the kind of game that after beating it I immediately wanted to start a new game knowing there’ll be a third playthrough after that. I cannot recommend this enough, it is a nonstop thrill ride from start to finish that feels new yet familiar at the same time. Well done, Naughty Dog. Well done.

Unlike Casey, I loved the first hour of The Last of Us. It did a brilliant job of introducing us to the world as it was, and the world as it is — so much so that the fact that the game jumps ahead 20 years doesn’t undermine the story in the slightest. You know exactly what’s happening via a short introductory sequence, a handful of conversations and simply by walking around the quarantined zone. It lays the groundwork for a great story that’s partially about hope and sacrifice but more about relationships.

So expertly crafted is Naughty Dog’s tale that you cannot help but become Joel. Those moments when he flipped the switch and became a full-fledged bad ass (“That’s alright… I believe him.”) are as exhilarating and empowering as any I’ve encountered in a game. Conversely, when he shows himself to be something less than superhuman you’re left to feel almost disheartened because you want to protect Ellie… you need to protect her.

There’s a great, varied gameplay experience in The Last of Us as well, but it’s the way the game gets you to invest in Joel and Ellie that makes it special (and also allows it to differentiate itself from other post-pandemic, “man protects innocent” stories like Children of Men, The Road or The Walking Dead). Even though we’re tantalizingly close to the next generation, The Last of Us proves there’s still plenty of juice left in the current one.

By Casey Curran
This entry was posted on Monday, July 15th, 2013 at 10:37 am and is filed under Casey Curran, Herija Green, Video Game Reviews. You can follow any responses to this entry through the RSS 2.0 feed. You can skip to the end and leave a response. Pinging is currently not allowed.