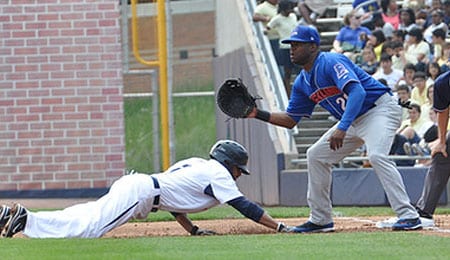 For those of you that have been following RotoRob for a few years – shockingly, we’re just a few weeks away from our fifth anniversary – you must remember one of our most enduring articles, “What the Hell Ever Happened to…Norm Hutchins.” Certainly from a reader backlash perspective, this was our most contentious article ever, as the back and forth between Hutchins’ defenders and detractors got downright comical at times.

In fact, the article got so much feedback that it has long ranked as the No. 1 Google result for “Norm Hutchins.” Posters ran the gamut from family members to ex-lovers that want a piece of Norm again to former teammates and coaches to former lovers that claim he gave them an STD. Very early on, Hutchins himself weighed in, but he has not returned since. Like I said, it was pure bedlam, and if you’ve never read the entire comments thread, you owe it to yourself to catch up.

When we first wrote about Hutchins in 2007, he was playing in the Atlantic League – considered the top Indy circuit. He bounced around other Indy leagues in 2008 and 2009, and – according to one reader – Hutchins was playing softball last summer.

Now a member of the Rockland Boulders who kicked off their season last week, Hutchins is off to a fine start, batting .320, having hit safely in five of the first six games. He was 1-for-2 with a run and two walks Tuesday, but got caught stealing for the second time in three tries. Hutchins has six runs, one homer, four RBI, one double, one steal and a solid 3/4 BB/K ratio.

The long-time outfielder is now 35, so he’s switched to first base for Rockland. If nothing else, the reduction in defensive responsibilities has helped him beef up his offensive numbers.

Because of the unbelievable uproar the Hutchins post caused, we can’t help but root for him. So make the most of this opportunity, Norm! And, as always, feel free to drop in and update us all on your experiences in the Can-Am.

It’s always fun to see the names that pop up in the Indy Leagues every year, a great source of ‘Oh! So that’s where he disappeared to’ moments for fading big leaguers hoping for a final chance, ex-prospects and hangers-on that just love to play the game.

Some highlights from the 2011 Can Am League: