Brad Cresse: What the Hell Ever Happened To… 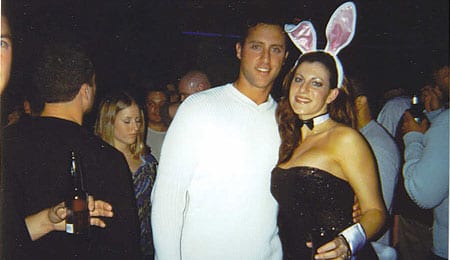 Brad Cresse never made it to the Show, but at least he attracted the attention of Playboy Bunny wannabees.

It’s been a really long time since we reached into our What the Hell Ever Happened To series, and that’s just plain wrong, because traditionally, it has spurred some of our most popular articles ever. Who can forget the Norm Hutchins thread that pretty much made RotoRob.com what it is today?

Over the years, offensive catchers are definitely the bane of Fantasy owners’ existence. We all want one, we all covet them, we all overvalue them, and just how many of them make that transition from minor league prospect to actual Fantasy contributor?

Brad Cresse, Arizona’s fifth round pick in 2000, is a perfect example. After a brilliant career at LSU (including 30 dingers in 69 games as a senior), he looked like a serious power-hitting catching prospect for a couple of years. This is a dude who smacked 78 homers in his college career – a total which still ranks sixth most all-time in NCAA history.

Yet Cresse never played a single game in the majors.

We’re here today to tell you what the hell happened to Brad Cresse.

Cresse managed to make one appearance on the site, however in passing. In my Spikes Up column in early July 2006 – an article I used to write for Creativesports.com – I wrote about how hard it was to find catchers of the future for Fantasy purposes and referenced several current and former Johnny Bench Award winners (the trophy that goes to the top college catcher in baseball). There were several nobodies on the list and a few failed prospects, among them – you guessed it — Cresse.

Prior to his career at LSU, Cresse was drafted by the Dodgers, for whom his dad Mark was a bullpen coach. Taken in the 34th round in 1996, he never signed, opting instead to go to LSU, a move that definitely paid dividends as Cresse massively improved his stock after his run with the Tigers.

As mentioned, Cresse’s claim to fame was as a college superstar. Part of a dominant LSU Tiger squad that wound up winning five national championships in 10 years, Cresse delivered the game-winning hit in the 2000 College World Series (scroll ahead to around the 4:30 mark to see the biggest moment in Cresse’s career). Not only did this wind up being the defining moment of his career, but it’s one of the most important moments in LSU baseball history. Most consider this game one of the most memorable events in all of college baseball in the 2000s.

Unfortunately, Cresse is erroneously referred to as “Joe” when the hit is mentioned in the prologue of Ryan McGee’s book The Road to Omaha: Hits, Hopes, and History at the College World Series.

Now 34, the Long Beach native went to high school in Huntington Beach, California before his stellar career at LSU. Obviously, his ties to the community still run deep as Cresse lives in Baton Rouge, Louisiana to this day. He’s an active participant on Tigalaya.com, an LSU athletics forum.

In the 2000 draft, Cresse was taken 159th overall by Arizona and his calling card to the majors seemed to be power. He looked like he’d be capable of a decent BA, but patience was not really his thang and contact hitting? Um, ya. About that. Cresse was blessed with catcher speed (i.e., next to none).

The D-Backs showed faith in the four-year college player, sending Cresse directly to High-A after drafting him in 2000, and he didn’t skip a beat, batting .324 with 35 runs in 48 games. Yes, he whiffed plenty, but what else was new?

Arizona quickly promoted Cresse to Double-A for the final 15 games of the season and while he remained productive, his slash line was predictably much lower.

Cresse spent the entire 2001 season at Double-A El Paso, hitting much better and scoring 55 runs in 118 games. He was a Texas League All-Star.

The following year, he spent most of the season at Double-A again, but his numbers dipped significantly (just 25 runs in 68 games). Regardless, Arizona promoted Cresse to Triple-A for the final few weeks and he was much better, flashing some nice extra-base pop.

He spent that entire campaign at Triple-A, but he struggled offensively, scoring only 40 runs in 82 games.

That was the end of the line for Cresse in the Arizona system. He was dealt to the Expos for a PTBNL in January 2004 and then dealt back to Arizona in March (apparently the deal was never finalized). Two days later, the D-Backs released Cresse and then he was signed by the Expos the following week. A month later, he was dealt to St. Louis. Yes, my head is spinning thinking about all that, too.

He spent the next two seasons in the St. Louis organization, splitting 2004 between Double-A (where he hit very well and scored 25 runs in 49 games) and Triple-A, where his numbers were again substandard.

The next year, he found himself in the Dodger system (10 years after they originally drafted him out of high school), where he briefly played at Rookie-ball (ostensibly on a rehab assignment) and less than 50 games at Double-A, where he actually enjoyed some decent numbers, but not enough to get another look at Triple-A.

That was the end of the line for Cresse, who retired after the 2006 season. His career slash line in the minors was .261/.335/.442 in seven seasons, nowhere near the potential he flashed at LSU.

After his career, Brad coached at the Mark Cresse School of Baseball for many years before joining the Big Leagues of Baton Rouge. It’s unclear if he still works there or if the school still even exists, but hopefully he responds to our Facebook message to bring us up to speed on what he’d doing these days.

Believe it or not, Eric Valent was once a popular attraction on the Bar Mitzvah circuit. Of this list of attendees to the Second Annual Hot Stove Dinner & Auction with the Phillies to be hosted by the Williamsport Crosscutters, who stands out as the person that would prompt you to buy a ticket: Hall […]

By RotoRob
Posted in BASEBALL, RotoRob, What the hell ever happened to? | 1 Comment »

On the Comeback Trail

One-time hot shot prospect Matt Anderson was attempting a comeback in Mexico. Remember Matt Anderson? You know, the first overall pick in the 1997 draft who was supposed to become one of the game’s top closers? Well, he recently resurfaced, pitching winter ball with Hermosillo of the Mexican Pacific League as he attempts to make […]

By RotoRob
Posted in BASEBALL, RotoRob, What the hell ever happened to? | No Comments »

Former Sox Catcher Gets Call to the Hall

It may just be the Rockland County Hall of Fame, but John Flaherty deserves kudos if for nothing more than talking Carl Pavano off a ledge. With the Sox in town this week, it’s been a busy few days as I scurry back and forth to the Rogers Centre in between trying to pack (the […]

By RotoRob
Posted in BASEBALL, RotoRob, What the hell ever happened to? | No Comments »