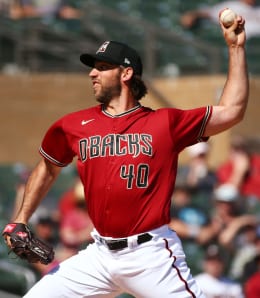 Are Madison Bumgarner’s best days behind him? (Rob Schumacher/USA Today Sports, via Reuters)

How weird will it be this season for San Francisco Giants’ fans to watch one of the favourite sons, Madison Bumgarner, toiling in the uniform of division rival Arizona Diamondbacks?

Stranger yet, with the NL adopting the designated hitter this season, we’ll be robbed of watching one of this generation’s top hitting pitchers (19 career homers) take his hacks.

While Bumgarner scuffled through his worst season, ERA-wise, in 2019, he was back to his usual durable ways after dealing with health woes in each of the two previous campaigns. Proving he was still capable of taking the ball deep into games while producing generally solid results, he was among the more attractive free agents on the market last winter, and Arizona pounced, inking him to a five-year, $85-million deal.

By now, you all know the story of the 10th overall pick from the 2007 draft. Two years after he was drafted, Bumgarner was pretty much the best lefty pitching prospect in the game, and he’s lived up to the hype with 11 years of mostly excellence with the Giants. Just keep him away from dirt bikes and Max Muncy (see below).

The big question now is how will Bumgarner fare, moving from the best pitcher’s park in the bigs to one that’s fairly neutral?

Well, for starters, this is a southpaw that’s been helped by pitching in Oracle Park his entire career. Bumgarner’s ERA on the road is 81 points higher over the course of his career. So, right off the bat, that doesn’t bode well for a recovery back to his low-3.00 ERA ways.

The good news is that in 20 career outings in Chase Field in Arizona, his ERA is 3.13 — identical to his career mark. Bumgarner’s Oracle Park ERA is still 41 points lower, but the difference isn’t nearly as stark as other parks he’s pitched extensively in (like Coors Field, for instance).

So, from a park effects standpoint, he’s not going to take a major beating, and by staying in the same division, his chief opponents remain the same (except this year of course, when he has to see them a much higher percentage of the time, which means more battles with his old buddy Muncy — see video below).

Back in 2014, Bumgarner set a career high in wins (since matched) and narrowly missed throwing a perfect game.

The following season, his command was even better, setting a career high with a 6.0 K/BB ratio. And while his win total dipped a bit in 2016, he still put up a third straight season (and fourth in five years) of at least 15 wins, while enjoying his best ERA yet.

In 2017, the injuries first reared their head, although his control remained near career-best levels. The following year, he dealt with more health concerns, and the worst command of his career. As discussed, despite the worse ERA, last year was a step in the right direction from a command perspective.

In his first outing of Summer Camp, Bumgarner was shellacked, but he looked much sharper in his second intrasquad start on Thursday. That’s a good sign given that he’s scheduled to start on Opening Day on July 24 and has just two weeks to ramp up for that.

After winning 85 games last year, Arizona believed that adding a veteran starter like Bumgarner could help take the team to the next level. We certainly know how good he’s been in most of his playoff appearances over the years, so if the D-Backs can make it to the postseason, they’ve got a real weapon here.

We also all know there’s a ton of wear on Bumgarner’s arm. He turns 31 at the beginning of next month, which certainly isn’t old, but it’s definitely worth noting that he’s topped 200 innings seven times already.

Heading into the 2020 season, there are several concerns here: a less forgiving home park, a rising hard hit rate and a rising launch angle. While Bumgarner is likely to get more run support on the Diamondbacks, his bottom line results are on shaky ground, making him no more than an SP3 for Fantasy purposes at this stage.

German composer Ludwig van Beethoven was one of the most celebrated classical music artists of all time. Born in 1770, he unveiled his fifth symphony in 1808. From this comes the “First Movement (in C Minor)” — one of the most recognizable pieces in music history, which appears on the 1992 album The Best of Beethoven.

Now it’s your turn. Let us know in the comments below what you’re expecting out of Bumgarner this season.

On this week’s episode of RotoRob Fantasy Baseball Weekly Podcast, heard every Thursday at 9 p.m. EST on Blogtalkradio, RotoRob was joined by Jonathan Mathis of I95 Sports & Entertainment Network and Tru School Sports.

The RotoRob Fantasy Baseball Weekly Podcast, heard every Thursday at 9 p.m. EST on Blogtalkradio, was back in action this week, once again featuring Pattonandco’s Tim McLeod.