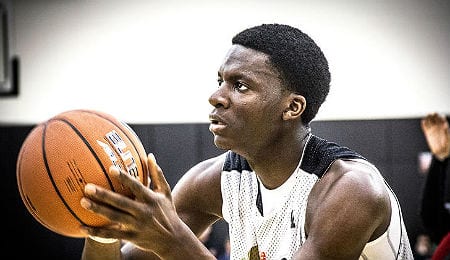 Clint Capela will be given the time to develop into a NBA player. (Nick Taylor)

Our 2014 NBA Draft analysis continues today as we turn to the teams in the Southwest Division to assess each of their draft classes.

Clint Capela, PF/C, Switzerland (No. 25): When you’re a team on the rise like the Rockets, you are afforded the opportunity to draft a guy and stash him for a minute while he develops into an NBA-ready player. That seems to be the case with Capela. His size alone is his biggest attribute and after some overseas seasoning he could very well make the transition from just being big to being big and skilled (although he flashed some skill at Adidas Eurocamp last year, as you can see in the video below).

Nick Johnson, SG, Arizona Wildcats (No. 42): The son of the late great Dennis Johnson should provide athleticism off the bench, which is something Houston has a strong need for after sending away Jordan Hamilton last season.

Alessandro Gentile, SG/SF, Italy (No. 53) (drafted by Minnesota, rights traded to Houston): By the looks of it, Gentile is a solid stash player for Houston. As long as he can develop some sense of how to play defense, he may be able to someday turn out some good minutes in the NBA.

Jordan Adams, SG, UCLA Bruins (No. 22): Adams is just what the Memphis Grizzlies needed — a shooter. Combine that with his solid defense and what you get is a stealin the latter portions of the first round. Now let’s see if Coach Dave Joerger can put it all together this season and bring some much needed NBA cheer back to Memphis after a disappointing season.

Jarnell Stokes, PF, Tennessee Volunteers (No. 35) (drafted by Utah, rights traded to Memphis): This kid can crash some boards and playing behind/with Zach Randolph only helps his cause. It’s actually hard to believe Stokes fell this far, but we’re sure Memphis isn’t complaining!

Russ Smith, PG, Louisville Cardinals (No. 47) (drafted by Philadelphia, traded to New Orleans): Smith is a quality PG, but trading Pierre Jackson for his rights seems counterproductive. The guys in the front office obviously see something in Smith that the rest of us do not and we’ll be the first to say we were wrong if Smith proves to be the better of the two. We like his game, we just don’t like the pick.

Kyle Anderson, SF, UCLA Bruins (No. 30): Oh, how the rich get richer. This pick makes complete and total sense for the Spurs: Anderson is smart, athletic, coachable and NBA ready. This pick is what makes the Spurs the Spurs. Anderson will fill a smaller Boris Diaw-type role for this team for years to come.

Nemanja Dangubic, SG, Serbia (No. 54) (drafted by Philadelphia, trade to San Antonio): There’s nothing here but a stash player, which is San Antonio’s specialty. We’re sure a few years from now we will be singing the praises of the Spurs front office for getting this guy.

Now it’s your turn. Let us know in the comments below how you think your favourite Southwest team did with its draft picks.

By J.R. Anderson
This entry was posted on Saturday, July 26th, 2014 at 1:34 pm and is filed under BASKETBALL, Draft report, J.R. Anderson, Prospects. You can follow any responses to this entry through the RSS 2.0 feed. Both comments and pings are currently closed.