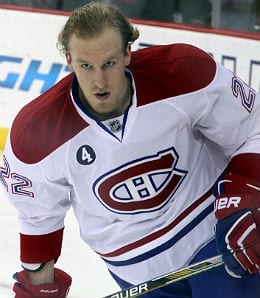 Dale Weise is one of the top 10 goal scorers early on. (en.wikipedia.org)

It’s been another great week of Fantasy hockey, and just as unpredictable as the last. Signs of life are beginning to show from the Connor McDavid-led Oilers, Chicago continues to struggle in the absence of its No. 1 defenseman, and the Minnesota Wild is finally getting goal support. Now if only it could get some goaltending support.

All around Fantasy studs, surprise sleepers, rugged blue liners and a goaltender about to rise to the challenge – this week’s Fantasy hockey waiver wire recommendations column has it all. Let’s get started.

Dale Weise, RW, Montreal Canadiens (ESPN: 5.9 per cent; CBS: 11 per cent): Coming off a hat trick (see video below) against the reeling Flames on Friday, Weiss finds himself tied for ninth in league goal scoring with such notable names as Jaromir Jagr, Patrick Kane, Blake Wheeler and Vladimir Tarasenko. The third-year forward is providing excellent production from Montreal’s third line, collecting six goals, eight points, a plus-4 rating, four penalty minutes, an outstanding 30 shots on goal, 16 hits and eight blocked shots through 12 games. The Habs seem to be firing on all cylinders thanks in part to this all around Fantasy stud.

Frans Nielsen, C, New York Islanders (ESPN: 45.6 per cent; CBS: 34 per cent): We seem to include Nielsen in our listings every October or November and then, as soon as we hit “publish,” he instantly stops producing. *Facepalm* We’re willing to take that risk, because he’s been just too good to ignore. Through 11 games played, Nielsen has five goals, nine points, a power play goal, 31 shots on goal, six hits and 13 blocked shots. Knowing our luck, that’s now all he’ll get for the season.

Justin Williams, RW, Washington Capitals (ESPN: 43.7 per cent; CBS: 36 per cent): The Caps have been listed as Stanley Cup favourites since before the start of the season, and they’ve lived up to it so far with eight wins and 16 points through 10 games. Their odds of hoisting hardware may have increased with the signing of “Mr. Game Seven,” Justin Williams. He’s playing a productive role in Washington’s top six, scoring two goals, eight points, a plus-5 rating, 23 shots on goal, three hits and four blocked shots. Williams’ production will no doubt decrease, but he’s definitely worth giving a shot, especially if your league has a shallow free agent pool.

Mark Borowiecki, D, Ottawa Senators (ESPN: 2.2 per cent; CBS: 15 per cent): Are you looking to add some grit to your offensively productive yet non-physical team? You might consider Ottawa rear guard Borowiecki. Through 11 games, he’s one of the league’s leaders in hits with 47. The rugged defender has also added an assist, a plus-1 rating, 21 penalty minutes, five shots on goal and 14 blocked shots. Don’t expect much offensive production (if any), but he’ll help in the miscellaneous categories.

Mike Condon, G, Montreal Canadiens (ESPN: 18.7 per cent; 9 per cent): Hart and Vezina Trophy-winning goaltender Carey Price is out with an injury for the Canadiens, which means the league’s leading team will now turn to Condon and fresh call-up Dustin Tokarski. Tokarski isn’t worth the pickup, but Price owners need to jump on Condon as soon as the former is made IR eligible. Through three games as Price’s spotter, Condon has three wins, a 1.67 goals against average and a .944 save percentage. He’s no Price, but he’ll do.

Fantasy Tip of the Week: Many big time players have already started dropping like flies with injuries. The plus side to that happening at the start of the season is that you might be able to take advantage of the less savvy GMs in your league.

If possible, we suggest you take a look at snatching up Chicago’s Duncan Keith. Our NHL Editor managed to snipe the reigning Conn Smythe Trophy winner, two-time Norris winner as the NHL’s best defenseman and three-time Stanley Cup champion by way of dropping Calgary’s struggling Dougie Hamilton, sneaking Keith onto Injured Reserve and adding the Islanders’ Travis Hamonic. Keith (knee) will most likely be out through the end of November, but picking him up now and storing him for later could pay massive dividends for your Fantasy team.

By Dakota Case
Tags: Chicago Blackhawks, Connor McDavid, Dale Weiss, Edmonton Oilers, Fantasy Hockey, Montreal Canadiens
This entry was posted on Sunday, November 1st, 2015 at 5:54 pm and is filed under Dakota Case, HOCKEY, The Wire Troll. You can follow any responses to this entry through the RSS 2.0 feed. Both comments and pings are currently closed.