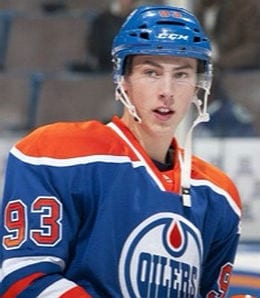 Ryan Nugent-Hopkins is going to be out for quite some time. (Twitter)

Who’s ready to watch the All-Star game next week? With talent like Alex Ovechkin, Jamie Benn and John Scott (!?), you definitely don’t want to miss this year’s game… but not before catching up on the latest injury news in this week’s edition of Hockey Hospital.

Ryan Nugent-Hopkins, C, Edmonton Oilers: Nugent-Hopkins’ tough season just took a turn for the worse as he’s expected to miss 6-to-8 weeks with an injured hand, suffered while blocking on a shot on the penalty kill (see video below).

Just when Connor McDavid is nearing his return, another one of Edmonton’s key forwards gets hurt. Nugent-Hopkins is a valuable part of the Oilers forward group and losing him for about two months will hurt. This may translate into them kissing their playoff dreams goodbye.

Kyle Turris, C, Ottawa Senators: A lower-body injury has kept Turris out of the past few games and it remains to be seen if he will be back right after the All-Star break. At least he now has a week off to heal. The Sens are hoping defenceman Marc Methot is also able to return after the break.

Sam Reinhart, C, Buffalo Sabres: Reinhart suffered an upper-body injury last week, but is likely to return after the All-Star break. The rookie began the month on fire with four goals in four games, but had failed to score in five straight games since.

Rick Nash, LW, New York Rangers: An MRI on Tuesday revealed that Nash was only suffering from a bone bruise and is expected to be back in action after the All-Star break.

Mathieu Perreault, C, Winnipeg Jets: Perreault has been placed on injured reserve with a lower-body injury. He’s enjoying a career season and is currently the third leading scorer on the Jets with 31 points, so hopefully this woe doesn’t knock him off track.

Chris Kunitz, LW, Pittsburgh Penguins: A lower-body injury kept Kunitz on the sidelines for a second straight game on Tuesday, but the ailment isn’t believed to be serious.

With Kunitz out Tuesday, Matt Cullen stepped up to the plate and was lucky enough to jump on a line with Sidney Crosby and Patric Honrqvist. While Kunitz is expected to return after the All-Star break, Cullen can provide short-term value in deep Fntasy leagues. Crosby and the entire Penguins offense have been on fire and many players have gained significant value playing next to arguably the best player in the world.

Cullen probably won’t be able to keep his spot there but the short-term potential is there for anyone who gets a shot to play next to Crosby. Cullen didn’t score Tuesday, but he managed to land five shots on net, so the production should follow.

Daniel Carr, LW, Montreal Canadiens: After suffering a knee injury in Monday’s game against Columbus, Carr will be out for the next three months. Montreal continues to be snakebitten by health woes.

Niklas Kronwall, D, Detroit Red Wings: Kronwall will be out of action for the next 2-to-4 weeks with a knee injury.

While Moore hasn’t provide much Fantasy value this season, he had been absorbing a decent chunk of ice time for the Devils. With him out of the picture, this creates an opportunity for another one of the Devils’ young defenders to grab hold of more even strength and power play time. This season, both Adam Larsson and Eric Gelinas have barely received any ice time and their point totals reflect that. However, both defenders have a lot of talent and have shown in the past that they’re capable of putting up points.

Gelinas is famous for his power play efficiency while just last season Larsson scored 20 points in the second half alone. In the past two games without Moore in the lineup, Gelinas has already seen a spike in ice time.

David Savard, D, Columbus Blue Jackets: An oblique strain will keep Savard out for the next few weeks. He shares the team lead in scoring among Blue Jacket blueliners, so it’s yet another blow for a woeful Columbus squad that’s actually been holding its own lately.

With Ward on the sidelines, Eddie Lack was given a chance to steal the starting job. Carolina has actually been playing really well recently and if Lack manages to give them good goaltending, the Hurricanes could string together a lot of wins. This situation reminds us of Ondrej Pavelec and Mike Smith getting injured earlier this season and their backups winning most of their starts. Lack even managed to shut out the Blackhawks Tuesday.

By Scott Maran
Tags: Cam Ward, Edmonton Oilers, NHL All-Star Game, Ryan Nugent-Hopkins
This entry was posted on Wednesday, January 27th, 2016 at 7:31 pm and is filed under HOCKEY, Hockey Hospital, Scott Maran. You can follow any responses to this entry through the RSS 2.0 feed. Both comments and pings are currently closed.