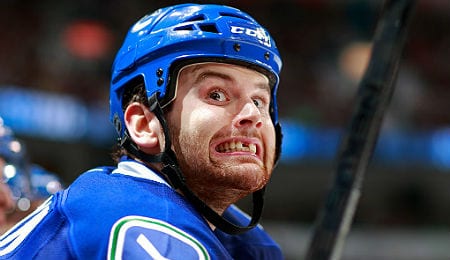 Zack Kassian is headed back out west. (hfboards.hockeysfuture.com)

The Montreal Canadiens have traded forward Zack Kassian to the Edmonton Oilers in exchange for goaltender Ben Scrivens. The Oilers will retain 24 per cent of Scrivens’ salary (a $2.3 million contract which ends after this season). Kassian’s contract also ends following this season and he’ll become a restricted free agent this summer.

As we all know, Kassian is not opposed to dropping the gloves (even if he doesn’t always win — see video below), having accumulated 124 penalty minutes two seasons ago and 81 in just a half a season’s worth of games in 2014-15.

This season, Scrivens has played nine games in the AHL, going 2-6-1 with the Bakersfield Condors (with a less than inspiring 3.47 GAA and .893 save percentage). In the past four seasons, he’s played with the Oilers, Los Angeles Kings and Toronto Maple Leafs, compiling a .905 career save percentage. Kassian has not played any games this season after he was entered into stage two of the league’s substance abuse and behavioral health program. Before this season, he was traded from the Vancouver Canucks, for whom he posted 59 points in 171 games over four seasons.

Both Kassian and Scrivens look like they could use a fresh start on a new team and both players might be able to get several chances to play. In Edmonton, Scrivens was banished to the minors and was stuck behind Cam Talbot and Anders Nilsson and in Montreal, Kassian was asked by the Canadiens to not report to their AHL team after he was sent down to the minors. Trouble seems to follow him around.

So while Scrivens should get a chance to start a few games while Carey Price is injured, Kassian’s best case scenario is to crack the Oilers bottom six, although given Edmonton’s good group of forwards, he’s already been sent down to the AHL for the time being.

Scrivens holds the potential to be a good backup goalie in Montreal and may be able to post similar numbers that he put up in Los Angeles. If he perform wells, he may be able to provide a lot of Fantasy value. However, it is unlikely that Kassian has the same potential as Scrivens to produce.

Now it’s your turn. Let us know in the comments below what you think of this trade.

By Scott Maran
Tags: Edmonton Oilers, Zack Kassian
This entry was posted on Monday, December 28th, 2015 at 10:51 am and is filed under HOCKEY, Scott Maran, Transactional analysis. You can follow any responses to this entry through the RSS 2.0 feed. Both comments and pings are currently closed.