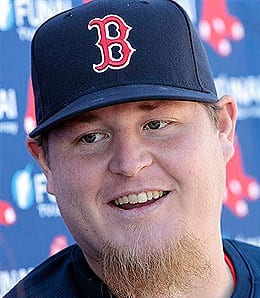 Hairs from Bobby Jenks’ silly beard will soon be all over the Boston buffet table.

In this week’s Saving Grace, we tour various bullpen situations in the Junior Circuit.

With one more save, Jonathan Papelbon will have reached 30 saves for the sixth straight year. He has only one blown save which came way back on May 9 and he’s yet to lose a game this year, sporting a 4-0 record. Papelbon has been particularly nasty as of late, with 15 scoreless innings since July 16. He continues to show his elite status against many top teams including the Rangers, Yankees, Rays, and Indians, and when opposing teams hear this tune at Fenway, they know the jig is up. Daniel Bard has five straight holds his last five outings and his excellence this season is a big part of the reason Papelbon is pitching so well. But with Papelbon a pending free agent, keeper league owners should note that Bard could very well be closing for the Sox in 2012. Bobby Jenks, who has been out since the beginning of July, threw a simulated game Wednesday and will begin a rehab assignment Saturday. The portly one could return to Boston’s bullpen when rosters expand in September, but the biggest impact he’ll have will probably be on the buffet table.

Jose Valverde continues to lead the American League in saves with 37. Despite a loss on August 17, he has converted nine saves in 11 outings this month. Because Valverde has worked so hard recently, he got a rest on Tuesday when Phil Coke picked up his first save of the season. Joaquin Benoit has been a solid set-up man with seven holds this month and is now just three away from tying his career high. He’s also been Justin Verlander’s best friend, stranded all five runners that the Tigers’ ace has left him this season.

Rookie closer Jordan Walden has struggled recently with two blown saves in his last three appearances. However, he redeemed himself with a win over the White Sox on Tuesday when Peter Bourjos hit his first career walk-off single. Walden’s K/9 is down a bit from his cameos last year, but he’s also been harder to hit and remains a dominant force. Lefty Scott Downs and righty Fernando Rodney have not been given any save opportunities recently, but Rodney has looked sharp, tossing four straight shutout appearances to trim his ERA by 55 points. Downs has been dealing with a hamstring issue for the past few days, but he’ll reportedly be ready for action on Friday. Walden, however, will need to pick up his game in the ninth inning if the Angels hope to chase down the Rangers for the AL West crown.

Joe Nathan has converted eight straight save chances and has all but officially taken the closer reins back from Matt Capps. Capps has not had a save since July 10 and blew his last save opportunity last Wednesday. Minnesota’s struggles will not help Nathan earn saves and if you are looking for a new closer to pick up for your last minute playoff run, Nathan most likely won’t get enough chances to help your team. However, his nice late-season run has given Minnesota food for thought as it considers whether to pick up his $12.5-million option next year or buy him out for $2 million. Of course, the other option is that the Twins deal him before the August 31st waiver deadline; Nathan has said he’d waive his no-trade clause if he was sent to a contender. Capps will also be a free agent, but it’s hard to imagine Minny bringing both of them back.

Since the Mariners remembered what winning was, Brandon League has been great, recording eight straight saves before giving up a three-run homer to Shin-Soo Choo in the bottom of the ninth during the first game of a double header against Cleveland Tuesday. It was his fifth blown save of the season, and it cost the Mariners a chance to sweep the series, but has a career with 31 saves. League’s last botch was on July 5, and he has posted a 10/2 K/BB ratio in his 12 2/3 innings since. Newcomer Chance Ruffin, acquired in the deal from Detroit, had put up goose eggs in his first three appearances as a Mariner, earning the win in one of them, but he came unraveled on Tuesday, giving up a hit and three walks while only getting one out. Seattle isn’t being shy about giving him a shot, though, as he appeared twice in the Cleveland series.

Kyle Farnsworth continues to be the closer for the Rays, with two saves and two wins in the last two weeks and change. In 8 1/3 IP this month, he has yet to give up a run and gave up his first two hits of the month on Tuesday. In one of the more pleasant surprises of the Fantasy season, Farnsworth has easily been a top 25 reliever. Joel Peralta recorded the win Wednesday when Elliot Johnson had a pinch-hit RBI in the 10th inning. It was his third win of the year, and in his six previous big league seasons, he had just five wins combined, never earning more than one in any season.

Jon Rauch went back on the DL last week and he’ll miss another 2-to-3 weeks while recovering from an appendectomy. Frank Francisco, who has played musical chairs with the closer job with Rauch all season long, resumed the role and recorded his 11th save with a shutout frame Wednesday against the Royals. Francisco has also been dealing with some shoulder sourness that kept his out of Sunday’s game when Casey Janssen (who is now the key set-up man) converted the save. If he stays healthy, Francisco should be the relief pitcher to pick up; however, he’s had some issues closing out games earlier in the season when he had the gig. The other reason to worry is that his reign as the closer may only last as long as Rauch is out.

Saving Grace: The Beard Gets Tangled

In four appearances last week, Putz recorded one win and three straight saves increasing his season total to 30, the third time he’s reached the mark. It’s pretty clear that Putz, three weeks removed from a DL stint, is back in cruise control.

July was Gregg’s worst month of the season as he gave up six runs in 9 2/3 IP. However, he’s thrown six straight hitless outings (the last three of which have been perfect) and could even bag a save early next week when the woeful O’s travel to Oakland.

The tough right-handed, sidearm pitcher should be used in the seventh inning role, and he brings a sparkling 2.39 ERA to help the Arizona bullpen. Assuming Putz can stay healthy the rest of the season, he seems to finally be back to his 2006-07 seasons with the Mariners when he recorded 36 and 40 saves respectively. Until this year, he had not gotten over 15 saves since his 2007 season.

The 2010 NFL regular season is in the books, and the playoffs are just around the corner. The most surprising team in the playoffs is the Seattle Seahawks, the first division champion in NFL history with a losing record.