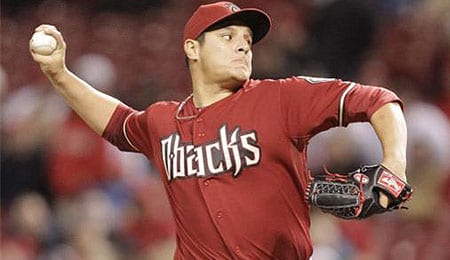 David Hernandez got the job done for the D-Backs while J.J. Putz was out.

After almost two years on the sidelines, we’re revitalizing one our classic baseball columns today. Not only do we welcome back Trevor after a nearly eight-month absence during which he was goofing off and getting an education (RotoRob officially endorses all our writers and readers earning a college degree), but Saving Grace, our column about all things closers, makes a comeback. Each week we will focus on a different league, bringing you all the Fantasy-relevant bullpen news. Today, we start with the Senior Circuit and next week, we’ll look at the American League.

Since J.J. Putz was activated off the DL on July 27, he has bagged four saves in four appearances while lowering his ERA to 2.82. He is clearly the outright closer in Arizona with 25 saves, however, while he was on the DL, David Hernandez took over, reaching nine saves on the year to go with his 14 holds. At the trade deadline, the D-Backs acquired Brad Ziegler in a trade with the Athletics. Set-up men sure were in demand at the deadline this year, weren’t they? The tough right-handed, sidearm pitcher should be used in the seventh inning role, and he brings a sparkling 2.39 ERA to help the Arizona bullpen. Assuming Putz can stay healthy the rest of the season, he seems to finally be back to his 2006-07 seasons with the Mariners when he recorded 36 and 40 saves respectively. Until this year, he had not gotten over 15 saves since his 2007 season.

I don’t think there is any doubt that rookie sensation Craig Kimbrel is outright closer in Atlanta. He recorded his 32nd save of the season on Wednesday, moving into second place in the Majors for saves, behind only the Bearded One. Kimbrel has not allowed an earned run since June 11, lowering his ERA to an even 2.00 in the process. When he recorded his 31st save on July 22, Kimbrel became the Braves’ new record holder for the most saves by a rookie. Jonny Venters is the next man in line for the Braves, grooving along with a miniscule 1.26 ERA to go along with three saves, 23 holds, and a 5-1 record on the season. Third in the pecking order is Eric O’Flaherty who has a sparkling 0.89 ERA with 21 holds. Obviously, the Braves have a solid — if possibly overworked — bullpen which should help them make a push for the playoffs being eight games behind the Phillies in the NL East, but 2.5 games up in the NL Wild Card race.

Perhaps Carlos Marmol had lost his firm hold on the closing position for the Cubs after a horrible month of July in which he got only four saves and saw his ERA balloon from 2.27 to 3.91. Marmol has come back to record three straight saves — the last two of which were flawless — and possibly recovered his form. While briefly holding the closer’s role for Marmol, Sean Marshall only recorded two saves. Marshall did however record holds in his last appearances to go over the 20 mark for the season.

After a great first half of baseball, Francisco Cordero had 17 saves and an ERA of 1.49. Since then he has blown three saves in five tries with a 1-2 record while seeing his FIP rise to 3.87. Flamethrower Aroldis Chapman has dealt with injury issues this season and has only one save to go with seven holds, but is getting hot at the right time. He’s currently riding a streak of 9 2/3 hitless innings, the longest single-season run by a Reds reliever since 1994. Chapman is starting to gain traction on the waiver wire, and while I don’t see anyone taking the closing role from Cordero anytime soon, the Cuban could potentially take the job if Cordero continues to struggle.

Despite blowing his third save of the season his appearance of August, Huston Street, thanks to his devastating slider, has 28 saves and is the clear starting closer. Backup Rex Brothers has allowed six runs in his last three outings and dingers in each of his last two appearances, so he could be close to losing Rockies skipper Jim Tracy’s confidence. This means that even though Street is supporting the highest ERA of his career at 3.75, his job security, not to mention his 6.57 K/BB ratio and 8.63 K/9, makes him a tier two closer.

On Tuesday, Leo Nunez pitched a perfect ninth inning to record his 31st save of the season. The Marlins have many worries, they are sitting at .500, 15.5 games behind the Phillies in the NL East, Josh Johnson’s health is in question, and Hanley Ramirez is struggling and is headed for an MRI on his shoulder. However, Nunez’s role as the starting closer is the one thing the Marlins do not have to worry about. Next year, when he’ll be due for a big raise on his $3.65-million salary in arbitration, however, is a long-term concern, and something we discussed on Wednesday.

In Fantasy leagues, the Houston bullpen is not the best place to find goodies. The closer for the team with the worst record in the majors is Mark Melancon, who took over the role mid-May. He did bagged just his 11th save on Wednesday — and it was a sloppy one at that — but he does sport a 6-3 record with a 2.98 ERA. Backups Wilton Lopez, who looked good in his last outing, and Fernando Rodriguez, who seems to be taking control of the eighth inning role, have combined for only 11 holds, but have five blown saves between them. Like we said, it’s a wasteland in Houston.

With formerly untouchable Jonathan Broxton still on the disabled list, still struggling Hong-Chih Kuo took over in May and then handed the reins over to Javy Guerra in July. Since taking the reins, Guerra has recorded seven saves and a win to total nine saves (in nine chances) on the season with a 1.78 ERA. The Dodgers are playing a bit better lately in what’s been an awful season, but they seem to have found a temporary solution in their closer role.

The Brewers already have one of the top closers this year in John Axford, who has been a huge surprise since ascending to the role, but do they think that’s enough to win the NL Central? Apparently not because their new set-up guy is Francisco Rodriguez, who they acquired in a trade with the Mets after the All-Star break. Axford has 31 saves on the season; Rodriguez already had 23 before being traded. Since then Rodriguez has two wins, two blown saves, and five holds. With a 3.5-game lead over the Cardinals in the Central, the Brewers have outfitted their bullpen well while they race for the playoffs.

After K-Rod was traded, Jason Isringhausen became the closer for the Mets. Izzy recorded five saves before imploding in his two August appearances, losing both outings and giving up five earned runs in two innings pitched. Will he even reach 15 on the year? With Isringhausen’s recent struggles, management could call upon Bobby Parnell, supposedly the closer of the future, to take a stab at earning saves. Before his August mishaps, Isringhausen seemed to be handling the closing role well. If he can return to his July form, he’ll be a viable Fantasy option in all formats.

Ryan Madson has had a good hold on things in Philly, and the pending free agent is setting himself for a nice payday. The Phillies have the best record in the majors and Madson has recorded 19 saves with a 1.86 ERA for them. When Madson was out, Antonio Bastardo took over and racked up eight saves in addition to eight holds. Between this pair and Jose Contreras, the Phils have 32 saves in 33 chances, a good reason their record is so impressive. If Madson gets hurt again, look for Bastardo to take over as a great Fantasy option. Adding to the bullpen’s depth, Brad Lidge recently came off the DL after starting the season on it. They have him set in the seventh inning, and in five appearances he has only allowed one earned run and while he’s yet to record a hold, he earned the save on Wednesday with Madson unavailable because his wife was pushing out a pup. Keep an eye on Lidge in deeper leagues as he can be a viable option for holds in the future and may yet regain his closer job at some point this season.

Besides the fact that the Pirates have surprised everyone this season by being in the running for the NL Central, Joel Hanrahan has been a revelation, virtually coming out of nowhere to record reach 30 saves already with an amazing 1.13 ERA. He has only blown one save on the season which didn’t occur until July 17. If holds are needed, righty Jose Veras is the best name to know in a no-name supporting cast, as he’s recorded 20.

After Ryan Franklin tanked his season in April, Fernando Salas has been the ruling closer in St. Louis with 19 saves. In his last nine appearances, Salas is 1-2 with four saves in five tries. His ERA has risen to 2.42 along with a splendid WHIP of 0.94. Jason Motte or newcomer Octavio Dotel, who has already been overworked, would be the next in line if something were to happen to Salas. Dotel has two saves to Motte’s zero for the season.

Heath Bell was almost traded to the Rangers before the deadline, but that deal fell through and instead the Padres sent their top set-up man, Mike Adams, to Texas. Now the struggling Padres get to keep the tier one closer, who has four saves in his last five outings giving him a total of 31 saves and an ERA of 2.23. Now that Adams is gone, Chad Qualls would be the next in line (assuming he doesn’t get dealt before the waiver deadline).

Brian Wilson, the man with The Beard, leads the majors with 33 saves in 37 tries. Before losing his last outing on July 29, Wilson had recorded eight straight saves proving he has returned to his playoff form from last season. By the way, if you haven’t had a chance to check out Showtime’s The Franchise series on the Giants, you should do so — Wilson is such a natural ham. Sergio Romo is the set-up guy for Wilson with 18 holds and a 1.75 ERA. The Giants’ offense may struggle at times, hence their trades for Jeff Keppinger and Carlos Beltran, but their pitching and bullpen are very strong as they fight to hold onto first place in the NL West against the Diamondbacks.

Another top young closer in the league is Drew Storen who is inching towards 30 saves in his first full season with the job. He recorded two wins, seven saves and an ERA of 2.25, while showing phenomenal command during the month of July. Opponents are hitting .205 against Storen for the season and he looks to have a tight hold as the closer over Tyler Clippard who has 27 holds and an ERA of 1.63. Clippard was reportedly offered to the Twins for Denard Span but the deal was rejected by Minny.

By Trevor Blake
This entry was posted on Thursday, August 4th, 2011 at 1:47 pm and is filed under BASEBALL, Saving Grace, Trevor Blake. You can follow any responses to this entry through the RSS 2.0 feed. You can skip to the end and leave a response. Pinging is currently not allowed.