Saving Grace: The Beard Gets Tangled 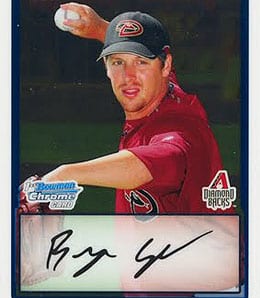 Rookie Bryan Shaw has solidified his role in the Arizona bullpen.

Saving Grace is back this week, focusing on NL bullpens in this installment.

J.J. Putz continues on his rampage to help the D-backs open up a 2.5-game division lead over the struggling Giants. In four appearances last week, Putz recorded one win and three straight saves increasing his season total to 30, the third time he’s reached the mark. It’s pretty clear that Putz, three weeks removed from a DL stint, is back in cruise control. Rookie Bryan Shaw, brought up for his second stint in the desert a month ago, has been sparkling, and has slowly worked his way into a set-up role. He’s racked up four straight goose egg outings to lower his ERA to 2.70 with five holds and a win. Keep an eye on him in deep NL-only leagues.

After struggling the last couple weeks, Huston Street was placed on the 15-day DL on August 9 with a mild right triceps strain. Street is expected to return when eligible on August 27, but for now Rafael Betancourt is handling the closing duties in Colorado. Betancourt recorded a save on August 9, but has not had another save opportunity since. Still, he’s been white hot, having not surrendered an earned run since July 6. Matt Belisle tossed 1 2/3 shutout frames on Monday to bag his seventh win, one shy of his career high, set when he was a starter for the Reds in 2007.

The Marlins are dealing with a banged up bullpen right now. Edward Mujica strained his lat on Tuesday, but he’s reportedly ready to return to duty if needed Friday. He’s done a much better job keeping the ball in the park this year, leading to a very fine season for the Fish. Brian Sanches (strained pitching elbow) landed on the DL Wednesday, but is expected to be back before the end of the season. After a fine 2010, Sanches’ WHIP has risen dramatically this year, causing his ERA to jump over a run per game. However, another injured Marlin reliever, Randy Choate (elbow) is probably done for the season after being placed on the DL Thursday. Florida’s LOOGY has complied a career-best 1.05 WHIP this year.

Now that 38-year-old Jason Isringhausen has reached 300 saves, he has lost his sole grip on the job to a three-pitcher committee including Pedro Beato and Bobby Parnell as the Mats would like to figure out if either of the youngsters can close for them next year. It’s doubtful Beato is the long-term answer at closer as the Mets plan to have him start in Winter Ball. After Parnell, who is really struggling lately, blew his save chance on Monday night, Isringhausen entered to record the save. However, that was Izzy’s only save this past week and only his second this month which shows the committee has taken away most of his Fantasy value. The pending free agent says he’d like to continue playing in 2012, but whether that will be with the Mets is another story altogether.

The team with best record in the Majors must have a strong bullpen and they do (currently ranked sixth in bullpen ERA). Ryan Madson has been rock on with nine straight saves since suffering his only blown save of the season. That’s 23-for-24 for those of you keeping score. He has made only two appearance in the last week and will be well rested this weekend when Philly travels to Washington. Antonio Bastardo and Brad Lidge are good set-up men to look into in NL-only leagues and deeper mixed leagues. In his last seven outings, Bastardo has five holds and two wins and his last four appearances have all been perfect. Lidge, who came off the DL a few weeks ago, has pitched well in August with one save (his 100th since being dealt from Houston to the Phillies), two holds and no earned runs allowed. David Herndon had a superb outing Thursday, giving up just one hit and no walks with four strikeouts in three shutout innings to rack up his first win of the season. He’s too low on the totem pole in the Phils’ bullpen to have any Fantasy value, but he could ascend to a more important role next year depending on how things shake out.

Joel Hanrahan has yet to record a save this month, and blew his last opportunity on Sunday against the Brewers. There’s talk the Pirates may try to move him this winter in an effort to improve their offense. Despite Hanrahan’s drop in Fantasy value, set-up men Jose Veras and Chris Resop won’t be taking over any time soon. Veras has only been scored on once in August, while Resop looked great in his last outing on Tuesday, hurling two shutout frames for his fourth win of the season.

The Bearded One, Brian Wilson, struck a razor on Monday, blowing a 4-2 lead in Atlanta when he gave up three runs and took the loss. It was his fifth blown save of the year, but he has been solid all season with 35 total saves. However, of greater concern is Wilson’s elbow, which is inflammed and kept him out for the past three days. It’s been reported that he may place catch on Friday, but we have no idea when he’ll be ready to pitch again and a DL stint is possible. In the meantime, Jeremy Affeldt could see a nice short-term boost in value.

In his last 14 chances, Drew Storen has recorded 13 saves and got the win in his only failure during this stretch. For the season, he’s now 33-for-37. Tyler Clippard is a good option for holds and has standalone value in NL-only leagues. He’s earned holds in each of his last four outings, bringing his season total to 32, just eight shy of the record 40 Luke Gregerson put up last season.

By Trevor Blake
This entry was posted on Friday, August 19th, 2011 at 1:01 pm and is filed under BASEBALL, Saving Grace, Trevor Blake. You can follow any responses to this entry through the RSS 2.0 feed. You can leave a response, or trackback from your own site.