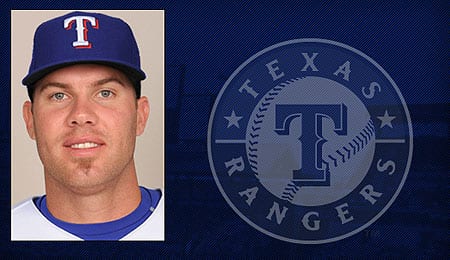 Colby Lewis is very much off the radar, but is a serious sleeper for the Rangers.

We’re back with more of the 2010 RotoRob MLB Draft Kit, today offering up another of our much loved Top 10 Lists Fantasy Owners Always Wanted, But Were Afriad to Ask For. So while we wonder if the Red Sox will nail down a contract extension with Josh Beckett, let’s explore everyone’s favourite Fantasy treat: sleepers!

1. Erick Aybar, Los Angeles Angels, SS: Chone Figgins has bolted to the Mariners, so Aybar has a chance to step it up and move into the lead-off role for the Angels. Shortstop is a veritable wasteland this season, so if you’re going to gamble, gamble in the direction that provides high upside, something that Aybar has to offer. With an upside of 85 runs scored, a .290 BA, and 20+ stolen bases at a very shallow position, Aybar is a great buy in the mid-teen rounds.

2. Colby Lewis, Texas Rangers, SP: Under the radar? No, he’s pretty much totally off it. Lewis is currently owned in a scant 3 per cent of Yahoo! leagues. How can you ignore the stellar numbers he compiled over the past two seasons with the Hiroshima Carp in Japan? The back-to-back strikeout titles in the Central Division are a good indication that the shoulder woes that derailed his career back in 2004 are well behind him. Lewis has enjoyed a solid spring and has a spot locked up in the Ranger rotation. Take a late round flier on him; you could be handsomely rewarded.

3. Conor Jackson, Arizona Diamondbacks, OF: The 2009 season was a lost one for the 27-year-old Jackson. He managed to get in only 99 at-bats before being shut down for the year with a bout of Valley Fever. His return to health as evidenced by a great Dominican Winter League season bodes well for a return to form in 2010. Jackson, who has sneaky speed, is being looked at by the D-Backs in the two hole this season, so don’t ignore his speed, as he has the potential to steal double digit bases and hit for his usual high batting average.

4. Kelly Johnson, Arizona Diamondbacks, 2B: In 2009, Johnson slumped his way into the Bobby Cox doghouse and was ultimately replaced as a regular by Martin Prado. Can he bounce back after that nightmarish season? Two seasons removed from a 16-homer campaign, a change of scenery could be just what the doctor ordered for Johnson. His potential upside warrants a look as an end play in 2010 drafts.

5. David Freese, St. Louis Cardinals, 3B: In 2008, Freese hit 26 homers and drove in 91 for Triple-A Memphis, followed up by 10 homers and 37 RBI in an injury-shortened 2009 campaign. He got off to a rather slow start this spring, but has picked up his game and is finishing Spring Training very strong. The Felipe Lopez signing seems to have been the motivation needed to get Freese to push his game to a higher level. The Cardinals have committed to Freese at third base to start 2010 and he could be a very nice bonus as a late-round gamble for your Fantasy squad.

6. Kyle Blanks, San Diego Padres, OF: This 23-year-old giant managed 10 homers in only 148 at-bats for the Padres last year. Playing in San Diego will keep him a bit under the radar, but you can’t ignore that big-time power potential. Blanks has a slot in the Padre outfield wrapped up entering the regular season, making him a great bargain as a late-round play.

7. Ian Desmond, Washington Nationals, SS: It was recently announced that Desmond beat out Cristian Guzman for the starting shortstop gig in Washington. Desmond has enjoyed a stellar spring, batting .326 with one homer, 12 RBI, and four stolen bases. What’s not to like? Double-digit home run and stolen base potential out of a position as bleak as shortstop is this year simply can’t be ignored.

8. Scott Sizemore, Detroit Tigers, 2B: The 25-year-old Sizemore is coming off a great season. He managed to swat 17 homers, drive in 66 runs, steal 21 bases, and contributed a superb .308 BA in 520 at-bats between Double and Triple-A. The fractured left ankle he suffered during the AFL season appears to be fully healed and he should be firmly entrenched at the top of the Tiger order by midseason.

9. Gio Gonzalez, Oakland Athletics, SP: It’s all about limiting the walks for the 24-year-old Gonzalez. In 2009, he managed 109 strikeouts in 98 2/3 IP, however, he also allowed 56 free passes, a totally unacceptable number. The on-going health concerns of Justin Duchscherer will undoubtedly provide opportunities for Gonzalez in 2010. Taking a chance on that huge strikeout potential could be very rewarding.

10. Scott Rolen, Cincinnati Reds, 3B: A shadow of the power hitter he was earlier in his career with the Cardinals and Phillies, Rolen still makes for a valuable late-round addition at a relatively short position in 2010. Hitting in that bandbox in Cincinnati, he could be a surprise for those looking to add value near the end of their drafts. An upside of a .290 BA and 12-to-15 homers with 80 runs batted in is worth a gamble, especially in deeper formats.

By Tim McLeod
Tags: 2010 MLB Draft Kit
This entry was posted on Wednesday, March 31st, 2010 at 3:16 pm and is filed under 2010 RotoRob MLB Draft Kit, BASEBALL, Cheat sheets, Sleepers, Tim McLeod, Top 10 lists. You can follow any responses to this entry through the RSS 2.0 feed. Both comments and pings are currently closed.