The Wire Troll: Rex Grossman Getting it Done 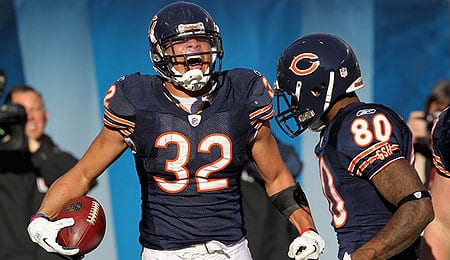 Welcome to the Week 16 edition of the Wire Troll. Well, here we are: Championship Week. If you’re still with us, congratulations on making it to the top of the mountain. Well, not exactly the top; there’s some other bloke standing on the other side of the peak with a stupid grin on his/her face, thinking that they have some claim to your prize. Your Week 16 task: Remove that grin, eject the aforementioned bloke and enjoy the view. It’s been a long, hard path to the top, and we’re not about to stop now, are we? Let those other losers count the days until pitchers and catchers report; for us, it’s still all about football. There are still some sneaky options out there on the wire that can help turn the tides of fortune even here in the 11th hour, so don’t be afraid to make a grab for the flavour of the day. Ummmm… tastes like… victory.

The Troll would like to take a moment to say a heartfelt thank you to all of those folks who have taken the time to write and say that they dig what we’re doing here; hopefully we’ve helped your Fantasy cause and provided a chuckle or two along the way. This is our last Wire Troll for the football year, and it’s been a hoot watching the 2011 NFL season unfold before our eyes week by week. If you’re still in the hunt for the gold, good luck in your Fantasy finals; hope we’ve helped a bit along the way.

To you and yours, a very Merry Christmas and Happy Hanukkah from the Troll.

Good luck this week, and for all of the latest waiver wire-worthy updates, don’t forget to follow the Troll and I on Twitter.

Reminder: There is a Thursday night game — Houston at Indianapolis, and all but two of the remaining games will be played on Saturday rather than Sunday. Check that schedule carefully before setting your lineups.

Rex Grossman, Washington Redskins: While it may seem scary to pin your title hopes on Sexy Rexie, there are some compelling reasons to do just that in most two-quarterback leagues. Grossman has averaged 247 yards passing over the past six games, while the woeful Vikings’ pass defense has yielded 260 yards per game and a league-worst 31 touchdown passes this season. Running back Roy Helu is a bit dinged up, which may force the ‘Skins to go up top in search of points. Grossman can be a bit pick-prone, but take heart in the fact that Minnesota has managed only six — that’s right, six, interceptions all season long.

Kahlil Bell, Chicago Bears: Bell carried 15 times for 65 yards and added five receptions for 43 yards and a touchdown in Week 15, and he may have supplanted Marion Barber as the top ground option in the Windy City. Bell has 10 receptions over the past two games, and those soft hands make him an attractive option in deeper PPR formats. The Chicago offense is so putrid that it’s tough to get too worked up over Bell’s Fantasy potential, but if you’re in need of a running back in deeper leagues he’s a decent play.

Lance Ball, Tim Tebow (featuring the Denver Broncos): This recommendation all depends upon the status of starter Willis McGahee’s injured hamstring; the Broncos say it’s not serious, but Ball would see a heavy workload if Willie Mac can’t go in Week 16. Ball came through in a big way whilst serving in McGahee’s stead Sunday, amassing 105 yards from scrimmage and scoring a touchdown. Keep an eye on McGahee’s status; if he’s unable to play, Ball makes a decent flex play in most Fantasy leagues.

DeAngelo Williams, Carolina Panthers: Williams has been maddeningly inconsistent this year, but the fact that he’s facing the butter-soft Tampa Bay run defense in Week 16 makes him worth a look as a RB3 or flex play in most Fantasy leagues. Williams struggled against the Bucs in Week 13, but he has scored more times against Tampa Bay than any other foe during his NFL career. There is risk here, but if D-Will gets rolling early, he could be in for a nice day against the Bucs’ porous front seven.

Jabar Gaffney, Washington Redskins: It’s not surprising that Gaffney has a great rapport with quarterback Rex Grossman; the pair piled up some pinball-style numbers for the Florida Gators back in the day. They’re back at again, as Gaffney has posted a 12-177-1 stat line over his past two games, and has become the No. 2 (or arguably the 1A) target in D.C. behind Santana Moss. If Helu is limited in Week 16, the ‘Skins may throw more often, and there are few better teams to go upstairs against than the Minnesota Vikings. Give Gaffney a long look as a WR3 or flex play in deeper leagues.

Tennessee Titans: It’s not that the Titans’ defense is that good, rather that the Jacksonville Jaguars offense is really that bad. The Jags are last — by a wide margin — in both passing offense and total offense, and there’s no reason to believe they won’t stink like zoo dirt again in Week 16. If your regular Fantasy defense is up against a tough opponent in Week 16, give the Titans a look, as they could have a field day against the punchless J-Ville offense (or is that J-Vile offense?).

Jordan Senn, LB, Carolina Panthers: Senn had been playing fairly well recently, but he absolutely exploded Sunday, racking up 14 total tackles, forcing a fumble and snagging an interception. He’s worth a look in deeper IDP formats, especially since he and his teammates will face the shaky Tampa Bay offense in Week 16.

By Buck Davidson
This entry was posted on Wednesday, December 21st, 2011 at 11:46 am and is filed under Buck Davidson, FOOTBALL, The Wire Troll. You can follow any responses to this entry through the RSS 2.0 feed. You can leave a response, or trackback from your own site.